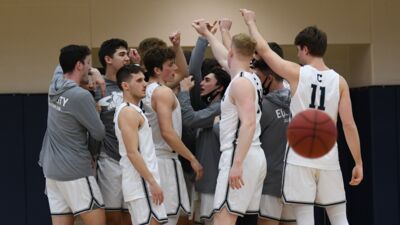 SEWARD, Neb. – The Concordia University Men’s Basketball team will head into the postseason having won three-straight games in dominant fashion. While concluding the regular season on Saturday (Feb. 20), the Bulldogs shot 47.8 percent from the floor and built a lead as large as 28 in an 84-63 blowout of visiting Doane. Gage Smith enjoyed another big day with a 21-point, 13-rebound performance.

Head Coach Ben Limback’s program honored four seniors prior to tipoff: Ryan Holt, Sam Scarpelli, Grant Wragge and Thomas Young. This may have been the final home game ever for one or all of them as Concordia (17-8, 14-6 GPAC) slides into the No. 5 seed in the GPAC.

“It seemed like every time they got a big momentum play, we answered,” Limback said. “They got a dunk in the first half and we come down and throw it ahead – Sam makes a beautiful pass to Justin (Wiersema). Second half they come out of a timeout and Gage throws a full-court pass to Ryan for a dunk. All of these things showed that our mindset today was about hunger and fight.”

The Bulldogs blitzed the Tigers early on in the process of mounting a 34-10 lead midway through the first half. The only thing Doane had to celebrate was a monster dunk by Jaxon Harre in the opening minutes – but it celebrated too hard and neglected to get back on defense. The likes of Carter Kent, Smith and Wiersema were the aggressors in a lopsided affair.

Smith accumulated his lofty totals in only 25 minutes of action. He rattled off 10 of his points in the first 11 minutes of the game as a real pain in the side of Doane. To the Tigers’ credit, they charged back within 11 (52-41) early in the second half. The 13-2 Concordia run that followed essentially put the contest away. Just for fun, AJ Watson lobbed an ally-oop pass to Wragge for a crowd-pleasing slam with the outcome already decided.

Holt notched six points and three rebounds on his senior day. Of course, he could still decide to return next season. For now, he’s soaking up the ride. Said Holt, “We lost T-Shuck, Brev, Chuol, Sammy and Jacob Jennings. This year was going to be huge for us to see how we played not having that big presence. We wanted to show that we could play with anyone, no matter any type of mismatches. It’s the junkyard dogs. That’s what we like to say.”

Wiersema (15) and Kent (13) also reached double figures while doing plenty of damage during the first half onslaught. Watson put up eight points, two assists and two steals off the bench. Young also knocked in a pair of treys. Scarpelli contributed five points and five assists.

Doane (6-19, 3-17 GPAC) has concluded its season. Normally steady with their ball security, the Tigers turned it over 19 times on Saturday. Alec Oberhauer topped the visitors with 13 points.

The Bulldogs would love to duplicate last season’s GPAC tournament championship run. As the No. 5 seed, Concordia will play at fourth-seeded Dakota Wesleyan (18-7, 14-6 GPAC) in the GPAC quarterfinals. During the regular season, the two sides split with the home team coming out on top in both cases.

Said Limback, “This is why we play. With all the stuff in the fall, we didn’t know if we would have a season or what it would look like. We’re excited to jump in. I’ll take the Bulldogs anywhere, here, wherever. If we play like tonight and sustain a great effort, we can play with anybody in the conference.”