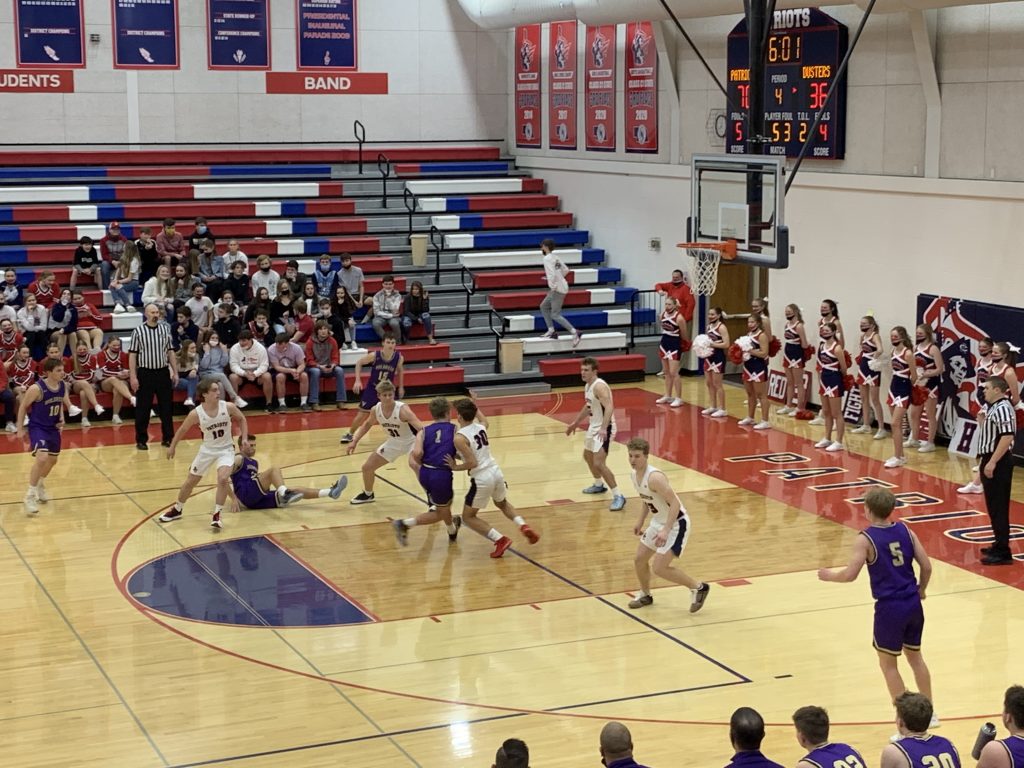 HASTINGS – Adams Central rolled past Holdrege on Thursday night, continuing their winning streak to 16 games and advancing to the next round of the Central 10 Conference Tournament. Click here to listen to the broadcast.

Holdrege came into the contest with confidence, riding their first back-to-back wins on the season. The Dusters took an early lead 3-2 after a corner three connected from Hudson Reed, but it was all Adams Central after that. The Patriots went on a 16-3 run after the brief advantage for Holdrege, knocking down three pointers from Lucas Bohlen and Jacob Echardt, as well as Dante Boelhower adding 8 points in the quarter. Adams Central led 18-6 at the end of the first.

The Patriots began to flex their muscles into the end of the first half, adding 22 and holding Holdrege to 13 while leading 40-19 at the end of the half. Tyler Schlecta had 8 points in the quarter, Bohlen hit another three pointer, and Cam Foster added 3 points as well fighting inside. Early on in the quarter however, Kaden Broeker connected on three triples from deep beyond the arc and Reed added his third three pointer, but Holdrege could not get anything else going inside.

Adams Central sprinted to the finish at the beginning of the third quarter before bleeding out the rest of the second half with reserves in for both sides. The Patriots did allow some flashes from Dashton Edgren and Jackson Hinrichs as they added three pointers, but the Dusters were held to only two shots made inside the arc all contest. The Patriots earned their 16th win on the season 75-39.

Adams Central improves to 16-1 as they will face #4 Crete in the semifinal round of the Central 10 Conference tournament. The Patriots had contributions from Sclechta with 19 points, 17 points added by Bohlen, 10 points tallied by Paul Fago, Echardt contributed 9 points, Boelhower finished with 8 points, Foster added 3 points as well as Jayden Teichmeier had 3 points, and Leighton Weber tallied 2 points.

Holdrege falls to 3-12 on the season and will face Seward on Saturday at 2:30 PM at the Aurora High School gym. The Dusters had contributions from Reed with 15 points, 9 points tallied by Edgren and Broeker, and 3 points a piece from Hinrich and Trace Anderson.