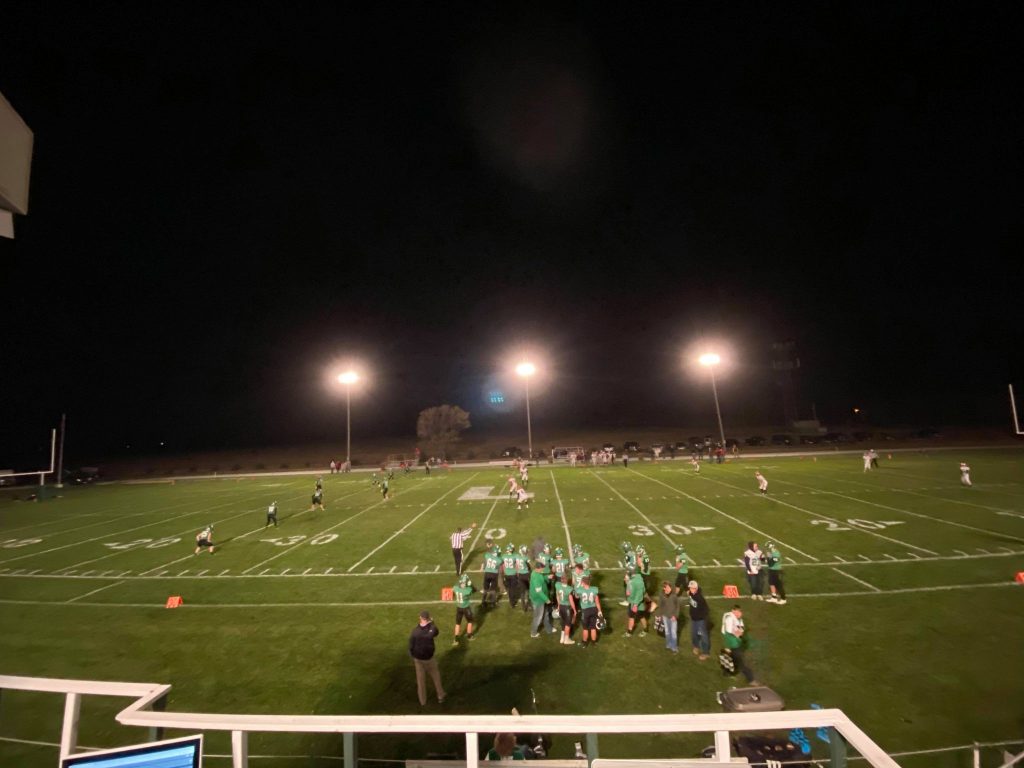 Loomis continues their impressive season, improving to 7-1 after a 54-28 victory over the Brady Eagles on Thursday night. The contest was also the final regular season contest of Wolves Head Coach Dennis Reese’s career. Click here to listen to the broadcast.

Brady came into Loomis sporting a 1-6 record, but they started off quickly offensively with a big play action pass completion to senior Logan Simmons on the first play of the contest. The Eagles would use the field position on a four play touchdown drive that gave Brady a 6-0 lead less than 2 minutes into the contest.

Loomis would respond quickly with their own four play drive, capped by a short quarterback sneak from  Aiden Lovitt and a successful two point conversion gave the Wolves the lead 8-6.

The Eagles would have a three-and-out, in which Loomis’ John Kenney would take the following punt 41 yards for a score to extend the Wolves lead 16-6 with another successful two point try.

Brady returned finding a 12 play drive that ended in Loomis territory, but unable to put points on the board as the Eagles would turn the ball over on 4th down. Loomis would be forced in their own three-and-out, sending a punt back to Brady.

Eagles quarterback Shane Most found a wide-open Simmons again on a play-action, wheel route for a 73 yard score on the first play of the following possession. A successful two-point attempt closed the gap as Brady trailed 16-14.

Loomis would then ground and pound with gashing running plays from seniors Lovitt, Joel Abramson, and Carson Orcutt to the tune of an 11 play touchdown drive continuing the lead back to 24-14 for Loomis.

The start of the 2nd quarter had Brady force an unsuccessful fourth down attempt, with Brady capping another long touchdown drive making the score 32-14. Brady and Loomis would again trade punts until the end of the half, when Loomis’ Kenney would shine in the open field, zooming down the left sideline for a 31 yard touchdown run as time expired in the half.  The Wolves trotted into halftime sporting a 40-14 lead.

The second half saw Loomis add two scores of their own in the third quarter, one being a big run from Lovitt in the 3rd quarter. Brady would add some late scores as well, as the final bell rang from Loomis High School as the Wolves celebrated a 54-28 victory.

The celebration continued into the post game, as head coach Dennis Reese was recognized at midfield with his team presenting him with a Loomis Wolves helmet, the game ball from the contest, as well as a signed poster with signatures from his current and former players.

Loomis improves to 7-1 on the season as they await  their matchup in the first round of the playoffs.  Brady will have their season come to a conclusion at 1-7 on the year.