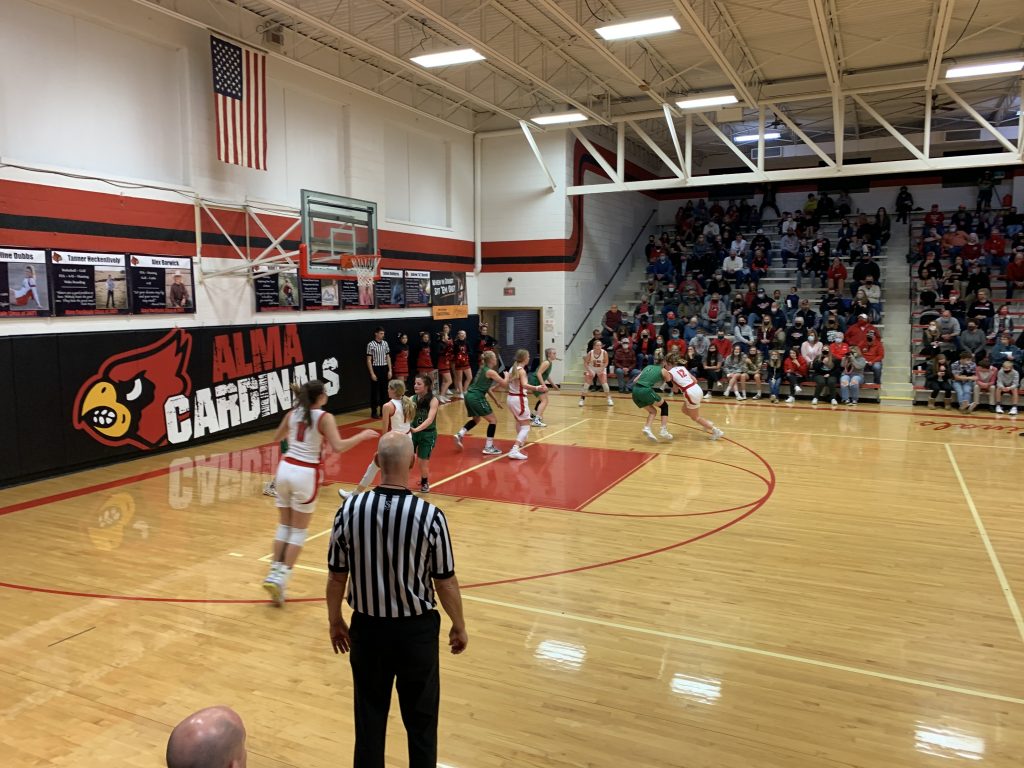 ALMA – Alma and Loomis battled all four quarters, but Loomis’ experience gave the Wolves the edge on Thursday night. Loomis won 55-52 in a nail-biter at Alma High School. Click here to listen to the broadcast.

The contest started off as good as advertised, as Alma and Loomis traded buckets and big plays in the first quarter. Loomis trailed early, but stayed within reach as buckets came from Alma’s Addison Neal and Addison Siebels, 5 and 4 points respectively. Katy Prickett added 2 points as well, but Loomis was able to take the advantage heading into the second quarter as they led 15-11 after Samantha Schemper battled inside for 6 points in the opening quarter.

Both teams would trade one possession leads in the second quarter, as Loomis hit shots from Alexis Billeter and a big three pointer from Hanna Stewart. Alma would not back down, as the Cardinals fought their way to 12 points in the quarter coming from Carlee Stuhmer with 7 points in the quarter, including a three pointer. Loomis continued to lead heading into halftime, 24-23.

Into the second half, Loomis got out quickly, taking advantage of some opportunities and dropping buckets from Billeter, Georgia Crandall, and Brooklyn Wiese stepping off the bench and adding four points. Schemper added another 6 points in the quarter, as Loomis ballooned their lead to as large as 11 in the third. Alma stayed within reach however, adding 12 but continuing to trail entering the final quarter down 38-35.

Scoring came at a premium in the final eight minutes of play, as Loomis and Alma both tallied 17 points. It was Loomis that struck first, getting another significant lead in the quarter to lead by multiple possessions as Billeter began to heat up knocking down inside shots and free throws as she tallied 6 in the quarter. Alma began to attack defensively, finding more steals and open looks inside that opened up Siebels a three pointer. Loomis led 55-49 with only a few seconds remaining, but as the game seemed to be out of reach Rylee Scott of Alma knocked down a three pointer with 1.4 seconds to go. Loomis took the inbounds and ran the rest of the time away, as the Wolves won 55-52 on the road.

Loomis improves to 8-8 on the season. The Wolves saw contributions from Schemper with 16 points, Billeter with 13 points, 10 added by Crandall, 6 points added by Stewart on three pointers, and 4 points contributed by Wiese. Loomis takes on Hi-Line on Friday night at home.

Alma falls to 10-3 after the home loss. The Cardinals saw contributions from Siebels with 14 points, 12 added by Stuhmer, 9 contributed by Neal, 8 tallied by Prickett, and 7 points added by Scott. Alma awaits their matchup as the #1 seed in the RPAC tournament.