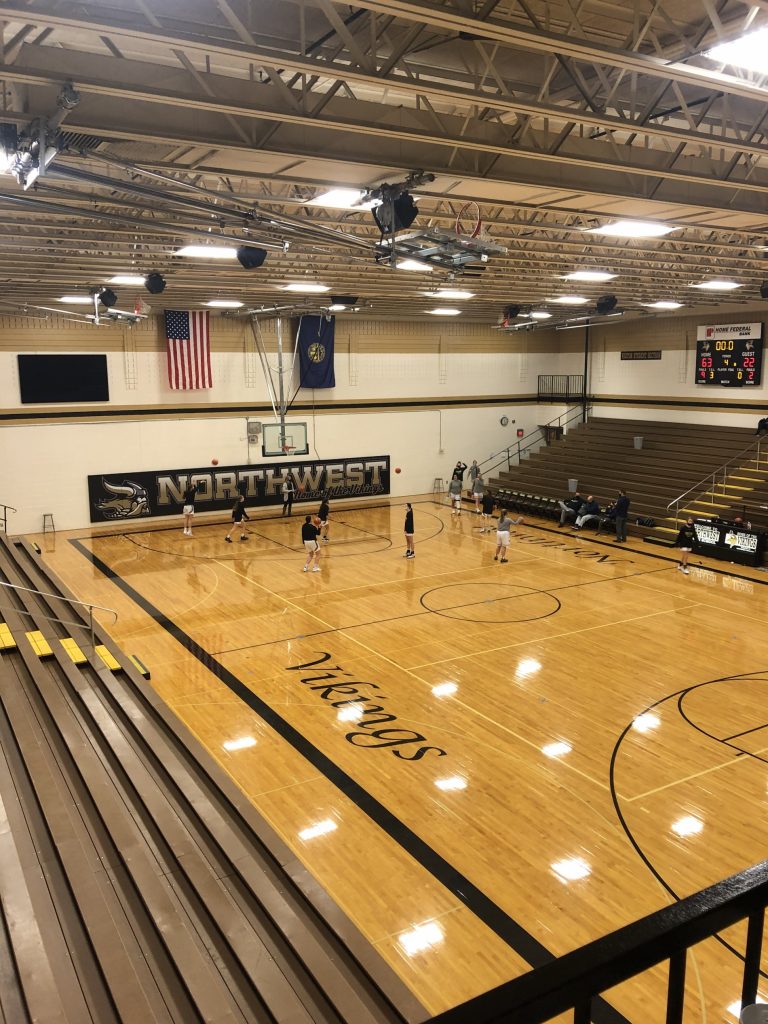 YORK -A back and forth affair throughout the first half was not enough to keep York head coach Matt Kern from getting his 200 win at the helm of the Dukes girls basketball team, defeating Grand Island Northwest 58-50.

A fiery offensive show led off the game as the Vikings now 5-7 kept it close during the first quarter, managing to stay within two points at the end of the first quarter behind the leadership of Claire Caspersen who led the Vikings with 19 total points when all said and done.

The Dukes, now 12-0 got the separation they needed in the second quarter, outscoring the Vikings by five to take a seven-point lead into the half 27-20. Leading the Dukes into the half in scoring was Fort Hays State commit Maddie Portwine with eight.

The third period light the spark in the building as the two teams’ offenses started clicking with the two teams combining for 29 points, only outmatched by a combined 30 point fourth quarter. The third period was where the Vikings under the leadership of Russ Morer started chipping into the lead, outscoring the Dukes by one to cut the lead to six going into the fourth quarter. The Vikings had the momentum, but Maddie Portwine started to heat up.

The Dukes started off the fourth quarter hot, getting the lead up to 14 behind Portwine who finished with 22 points, her 46 game in double figures as a Duke, but the Vikings fought back getting the score within eight, the final margin. The Dukes head to Crete next which can be heard on KOOL radio.

The game was even throughout with neither team being able to find any separation over their opponent with Vikings now 7-4, under the leadership of Chip Bahe taking a one point lead after the first quarter 12-11. The second quarter helped write the narrative of the game as the teams fought back and forth with the Dukes now 3-8 on the season managing to outscore the Vikings by one to take the game into half tied at 22 all.

The third quarter is where the separation happened with the Vikings, lead in scoring by Parker Janky who led all scorers with 18 points, outscoring the Dukes by four to take a 37-33 lead into the fourth quarter. The Dukes, having scored 11 points in each of the first three quarters, needed to find a way to score more to stay in it and they did.

The fourth quarter was thrilling as the Dukes, led in scoring by Matt Haggadone who finished with 15 points, fought their way back into it. Getting the game tied at 48 with two minutes left. But that was the end of the scoring for the Dukes as they could not get a shot to fall the rest of the game.

The Vikings took a two-point lead in the final two minutes and held on from there, but not without some excitement as Jed Walford missed two free throws with just under a minute left giving the Dukes a chance. However, on the rebound and fast break opportunity coach Scott Lamberty decided to set things up with a timeout. Coming out of the timeout the Dukes had a chance to tie or take the lead, but they did not capitalize. Turning the ball over, before fouling Walford to put him back at the line with under 10 seconds left to ice it. After missing the two previous free throws, Walford who finised the game with 12 points, calmed himself down and made the free throws to put the Vikings up four and ice the game way winning 52-48.

The Dukes will next head back to Grand Island on Tuesday to face Grand Island Central Catholic before heading to Crete on Friday. The game at Crete can be heard on KOOL radio.