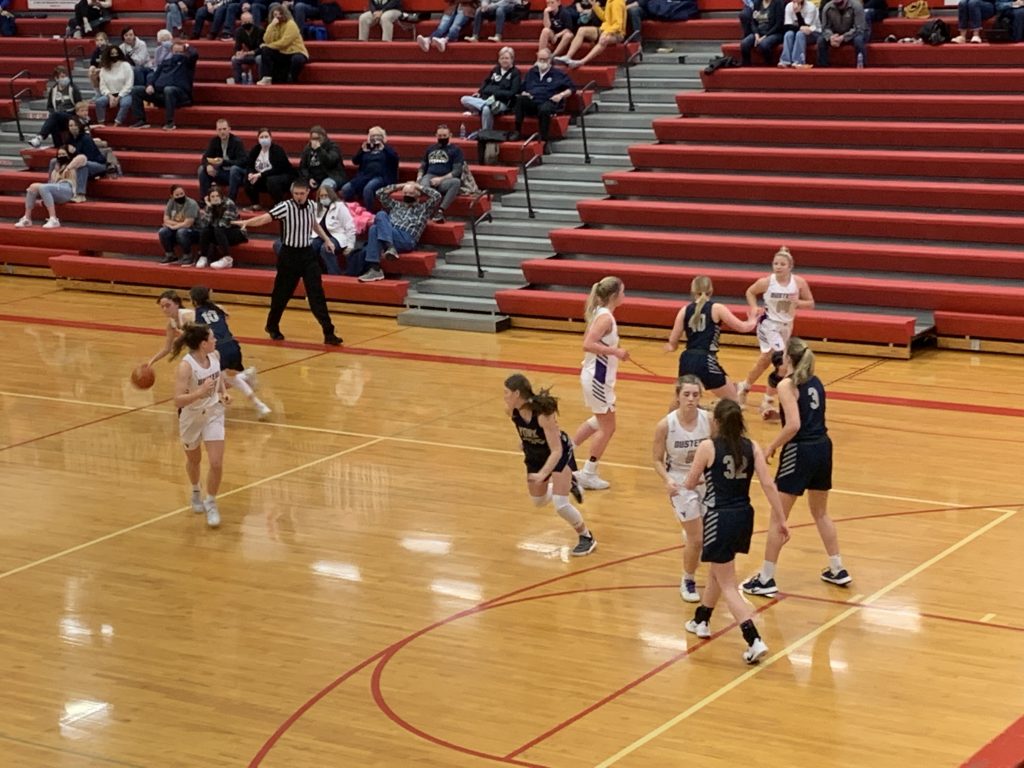 AURORA – A game between two contrasting styles ended in overtime as York won in a 57-51 showdown at the Aurora Sports Complex on Saturday afternoon, earning third place in the Central 10 Conference Tournament. Click here to listen to the broadcast.

Both teams came into the third place after disappointing losses in the semifinal round; Holdrege falling by a single point to #1 Crete and York unable to contain #6 Northwest. The Lady Dusters had won low scoring affairs all season long, while York looked to continue their high-flying offense. At the beginning of the contest, it was the defense’s that shined.

Holdrege started the contest with a sound defensive stop then adding scores in the first quarter from four different Dusters. York stayed with Holdrege however, as Masa Scheierman added 4 points and Destiny Shepard was able to finish a 3-point play. Mattie Pohl also added 2 points in the first, as York led 9-6 in the opening minutes.

Both teams continued to match each other blow-for-blow, as Holdrege quickly got back into the quarter with a three pointer from senior Taylor Wiser. York had Maddie Portwine held scoreless in the first quarter, but she was patient in finding her opportunities as she added 7 points in the second quarter. Shepard added another three pointer, but Holdrege found scoring from every starter and some help from the bench by the end of the second quarter. Avery Hurlbert hit two free throws, Megan Belgum added 4 points in the second, and Alexis Bliven added another lay-in. Holdrege and York entered their halftime locker rooms tied up at 21.

Entering the third quarter, it was all Dusters after a short burst from York. The Dukes drained a quick shot, but Holdrege began to clamp down defensively then added points from Bliven, Wiser and McKenna Ortgiesen. Bliven would knock down a jumper, Wiser added another three pointer, and the high point came from Ortgiesen knocking down a triple extending the Duster lead to 7 points. York had Kiersten Portwine knock down a three, while Shepard converted another three point play, and the elder Portwine added another 4 points. Holdrege outscored York 16-10 in the third quarter, holding a 37-31 lead entering the fourth.

In the fourth quarter, York began to pile up fouls allowing many opportunities for Holdrege to bring the game out of reach. As the Dusters would travel to the free throw line, consistently each player would knock down the first of a one-on-one, promptly missing the second. These added opportunities kept York in the contest as the Dukes began to unload three pointers, one from each Portwine, with Maddie continued to find drives inside to finish at the basket. In the fourth quarter, Maddie Portwine added 9 points on her own.

In the final moments of regulation, The game appeared out of reach before York’s Scheierman nailed a three pointer to bring the game within one. Holdrege was promptly fouled on the next possession for York, but the Dusters could only convert 1 out of the 2 free throws in the remaining seconds. York, down by 2 points, attacked inside and dished late to Scheierman who finished at the basket with time expiring to time the game up at 47.

Holdrege could not keep up with York in the added time, as Bliven fouled out early in the extra period and the Dusters could not contain the hot hand of Maddie Portwine as she led all scorers in overtime with 5 points. York escaped with a come from behind victory to earn third place in the Central 10 Conference tournament, 57-51.

York improves to 15-3 on the season, as the Dukes earned third place in the tournament. York had contributions from Maddie Portwine with 25 points, Shepard tallied 13 points, Scheierman finished with 9 points, Kiersten Portwine had 6 points, and Mattie Pohl had 4 points.

Holdrege falls to 9-8 on the season and finishes fourth in the Central 10 Conference Tournament. The Dusters had contributions from Wiser with 12 points, Bliven added 11 points, Orgtiesen finished with 10 points, Pfeifer had 7 points, Belgum ended with 6 points, and Hurlbert had 3 points.