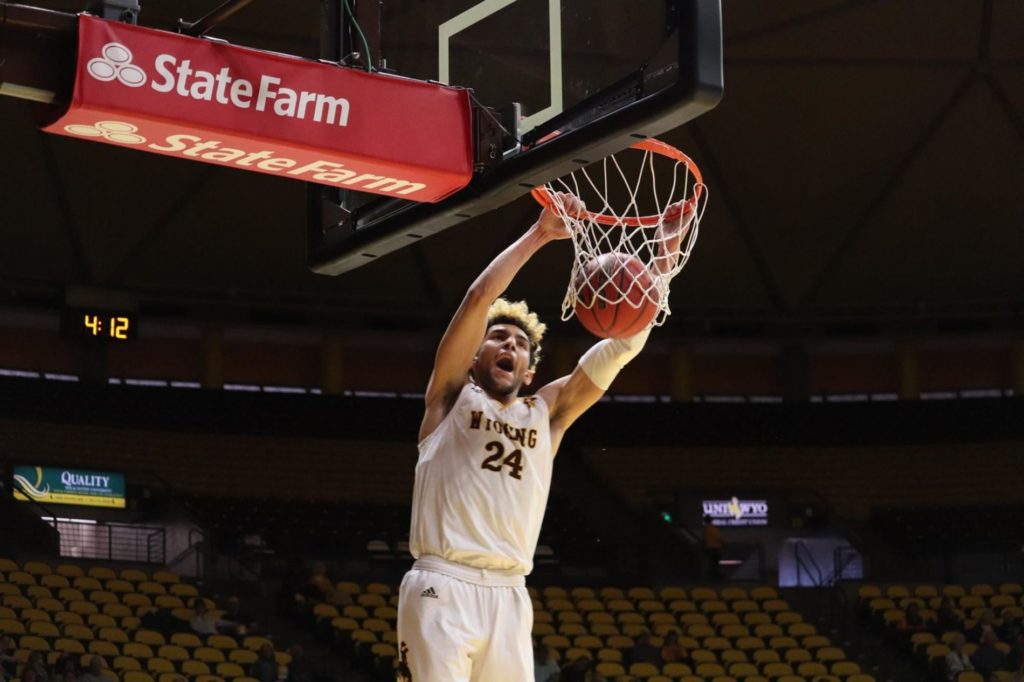 Laramie, Wyo. (Dec. 28, 2019) –  The Wyoming Cowboys closed out their 2019 non-conference schedule on Saturday with an 82-68 home win over Nebraska Wesleyan of Lincoln, Neb.  The win was the Cowboys’ second consecutive victory after they won a 72-66 overtime road game last Saturday over the University of Denver.  UW improved its record to 5-9  on the season with Saturday’s home win.  Nebraska Wesleyan suffered only its third loss of the season, and now has a record of 10-3.  The Prairie Wolves entered the game ranked No. 8 in the nation in NCAA Division III.

“I wanted our guys to not take this team lightly, because I have great respect for what Nebraska Wesleyan has accomplished with their program.  They are a Top 10 team in the nation at their level,” said Wyoming head coach Allen Edwards.  “I also wanted to see our guys come in and execute our game plan, which overall I thought we did a good job and had a good team effort.

“I thought the guys did a great job today of moving without the basketball.  We were able to get Maldo (Hunter Maldonado) in the middle of their zone, and he did a good job of kicking the ball out to our shooters.”

Wyoming scored a season high 82 points as a team, and had five individuals score in double figures, led by senior Jake Hendricks, who scored a season high 21 points.  His previous season high was 19 points, which he scored last Saturday in the road win at Denver.  Hendricks fell just six points shy of his career high of 27 points, which he scored a year ago against DU.  Hendricks scored his 21 points versus Nebraska Wesleyan on 7 of 15 shooting from the field, including 6 of 14 three-point field goals, and he was a perfect 1 of 1 in free throws.  His six three-pointers tied a season high and was only one shy of Hendricks’ career high of seven three pointers, which he has done twice in his career.

Hendricks was joined in double figures by sophomore Hunter Maldonado, who scored 19.  Senior A.J. Banks added 12.  Two young Cowboys  posted career highs as sophomore Greg Milton III and true freshman Kenny Foster each scored career best 11 points.  Foster scored nine of his career high 11 points in the first half.  His previous career high as a Poke was eight points vs. Oregon State on Nov. 16, 2019.  Milton would do all of his damage in the second half.  After not scoring in the first half, he would score a career high 11 points in the second half, making 3 of 4 three-point field goals and 1 of 3 two-pointers.  Milton’s previous career high as a Cowboy was seven points against TCU on Nov. 26, 2019.

“Jake (Hendricks) is obviously a senior, and (Hunter)  Maldonado is wise beyond his years,” said Edwards.  “Jake did what he does, shooting 14 threes and making six of them.  Maldonado had seven assists and only two turnovers and does a great job of helping his teammates.

“It was good to see Kenny Foster and Greg Milton come out and have strong performances as we prepare to move back into conference play.  We will need those guys to contribute moving forward, so this was a good game for both of them.”

Sophomore Brandon Porter would make his first start of the season and only his second career start on Saturday.  Porter ended the game with four points, two rebounds and one block.  Sophomore T.J.  Taylor would lead the Pokes in rebounding with eight on the day.

Wyoming has now recorded back-to-back wins for the second time this season.  Earlier this season, the Cowboys defeated Detroit Mercy (76-49) on Nov. 19 followed by a 69-61 win over Louisiana on Nov. 21.  Both of those were home wins for the Pokes.

Nebraska Wesleyan’s top scorers were Nate Schimonitz, with 22 points.  He was joined in double figures by Nate Bahe, with 12 points, and Cordell Gillingham, who added 11.  Clay Reimers was the only double-figure rebounder for either team in the game.  He pulled down 10 rebounds for the Prairie Wolves.

There were only three ties in the game and only one lead change the entire game.  The Cowboys led for 32 minutes and 12 seconds of the game.  Nebraska Wesleyan led the game for only six minutes and eight seconds.

“Obviously, we now go back on the road at Boise,” said Edwards.  “Coach (Leon) Rice has done a great job with the program at Boise State, but I told our guys I feel like we’re coming into our own, so we’re looking forward to getting back in conference play this coming week.”

Tickets to Wyoming home games may be purchased: online at www.GoWyo.com/tickets, by emailing tickets@uwyo.edu, calling (307) 766-7220 or by stopping by the UW Athletics Ticket Office at the main ticket office on the west side of the Arena-Auditorium located on Willett Drive.