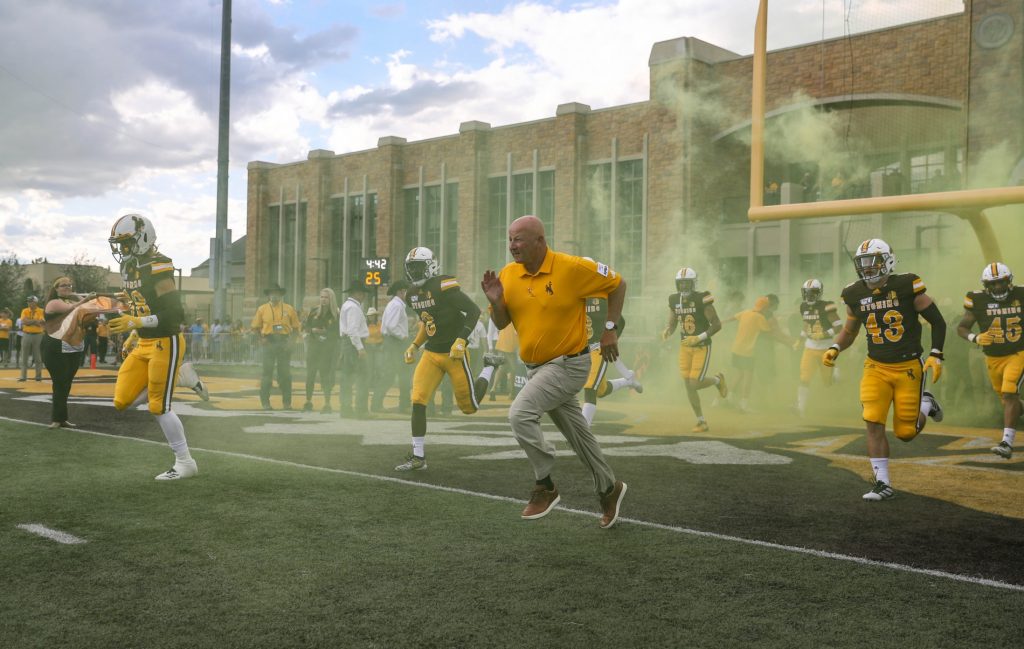 Laramie, Wyo. (Sept. 25, 2020) — The Wyoming Cowboy Football team is wasting no time in preparing for the 2020 college football season. The Pokes worked out in position groups on Friday following the announcement Thursday evening that the Mountain West Board of Directors had approved plans to move forward with a fall season to begin Saturday, Oct. 24.

The Pokes will have four weeks to prepare for the opening of the season on Oct. 24. All fall practices will be closed practices.

The 2020 season will consist of an eight-games, it will primarily be a conference only schedule with the Mountain West Championship Game scheduled for Saturday, Dec. 19.

A conference schedule will be announced by the Mountain West in the near future.

“We’re thrilled to be here. We all work in this business because we love competition and we love being around young people,” said Burman. I know I speak for Coach Bohl on this — it’s been a hard few weeks since we told our football players no (no fall season). I’m glad we’ve now changed direction and we’re moving in a direction to allow them to compete.

“The one question you probably all are asking is what has changed. I would say a lot of things have changed in the few weeks since that original decision was made. But the number one most important issue that all the A.D.s and the conference office have spent the vast majority of their time working on is testing. Rapid testing is the key. Going back several weeks, we did not have a partner who could do rapid testing, whether it be antigen testing or PCR testing, numerous times in all 12 (Mountain West) markets and do it in a fashion we could trust. Fortunately, as testing has progressed we have found a partner (Quest Diagnostics)and we’re in a position now where we feel like we can move forward with testing three times per week.

“The other things that have changed — county regulations and state regulations in some of our markets have gotten more flexible as it relates to travel and practices and group gatherings. We still have some hoops to jump through but we are in a better position than where we were.”

Regarding Having Fans at Games in 2020 and UW Athletics Work With the Wyoming Department of Health.

“We are working with the Department of Health and the state,” said Burman. “We will have fans. The number of fans is still to be determined. The Wyoming Department of Health — Mike Ceballos, Dr. Alexia Harrist, Stephanie Pyle — are unbelievable how effective they are and how good they’ve been to work with. We are blessed in Wyoming to have people like these who really care about our university.

“There will be fans in attendance in War Memorial Stadium based on today’s data and today’s information. What that number is and who can gain access — we’re not sure yet. Our goal is to take care of as many season-ticket holders as possible. We want to be safe. We want to be diligent, but we also want to try and take care of the people who take care of us. The tickets will be sold on a single-game basis.”

“We’ve been really fortunate that Dr. (Matt) Boyer has done a great job on our campus and working specifically with us on how to move forward safely and limit the exposure of our student-athletes.

“It is going to take a great deal of discipline from our players moving forward. We’ve told them what things to do, where to go and how to maintain their safety. It certainly is a challenging time, but discipline is going to come into play.

“Bottom line is we’re going to celebrate that we’re playing!”

“When we got the news last night, all of us were extremely excited to get ready to get back into fall camp,” said Muma. “I got the news (we were playing) from my position coach. We were all on a group message together and got the notification that way. I was sitting on my couch, hanging out watching the Denver Nuggets game and just jumped right up and got very excited to hear the news was official.

“I definitely think it is very important (that we police ourselves as team members) for us to be able to continue to play. There is only so much the coaches, strength staff and athletic trainers can do while we’re at the athletic department facilities. The biggest issue right now is helping in policing our team outside of football, outside of our workouts and insuring our own groups of house mates or our own position groups are doing the right things for our team right now.

“The first thing that ran through my mind (when I heard we were playing) was it was about time,” said Chambers. “Another emotion that ran through my mind was I’m ready to go. I think the team is ready to go. I think we’ve been yearning to play. Watching other colleges around the country play was not a good feeling knowing we weren’t playing. Now that we have a plan in place for us to play, it is a great feeling for us.

“It was definitely tough personally (not playing) because I came back early in the spring when nobody was here in Laramie and I had a plan and I had a goal of getting healthy. I achieved that goal ultimately of getting healthy. To have the season stripped away when you have worked so hard is a terrible feeling. I felt like I did all that for nothing. Now that the season is back, it feels like I didn’t do that for nothing — there was a reason for that. Everything came full circle, and I have a good feeling now.”

Earlier this summer in a vote of Mountain West Conference media the Cowboys were picked as one of the favorites to compete for the MW Championship, being selected second in the MW Mountain Division in voting by conference media members.

More detailed information on ticketing to 2020 Wyoming Football games will be coming soon and will be dependent on the number of fans allowed to attend home games this season as determined by the Wyoming Department of Health in cooperation with the University of Wyoming Athletics Department. The number of fans will be limited.