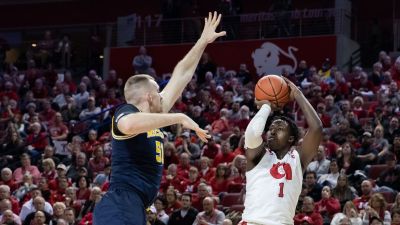 Lincoln – Cam Mack had 19 points and nine assists, but a second-half lull proved costly as Michigan posted a 79-68 win over the Huskers Tuesday evening. Mack continued his strong shooting, going 7-of-14 from the floor, including a career-high five 3-pointers for the Huskers. He was one of three Huskers to finish in double figures, as Haanif Cheatham had 17 points on 7-of-11 shooting, while Kevin Cross came off the bench to add 17 points, including a trio of 3-pointers for the Huskers (7-14, 2-8 Big Ten).

Trailing 48-41, Cross keyed a 11-2 Husker run, scoring seven of his 17 points to help the Huskers erase the deficit and a 52-50 lead on a Cross jumper with 13:49 left. The Huskers’ lead would be short-lived, as Michigan responded with a decisive 19-3 surge to regain control.

Bandon Johns Jr. and Franz Wagner combined for 12 of the Wolverines’ 19 points in the run, while Nebraska missed 11 of 12 shots in that stretch.

The Huskers and Wolverines traded baskets in a competitive first half as the Wolverines took a 40-35 lead into the locker room. After a tribute from both teams to Kobe Bryant to start the contest, the Huskers scored the first five points and led 11-7 after a basket by Cheatham.

Michigan came back five straight points of their own and either team led by three points until Michigan used a 7-0 run to push the margin to 38-50. Mack, who had 13 of his points in the first half, kept the Huskers within striking distance, hitting a runner to beat the first half buzzer, as Nebraska shot 50 percent in the first 20 minutes, including 5-of-11 from 3-point range.

Behind the play of Mack and Dachon Burke Jr., Nebraska pulled to within 43-41 early in the second half before a 5-0 Michigan surge extended the lead to 48-41, setting the stage for NU’s flurry.

The Huskers return to action Saturday night as they host No. 24 Penn State in the annual Coaches vs. Cancer Suits and Sneakers game. Tipoff time at PBA is set for 6 p.m