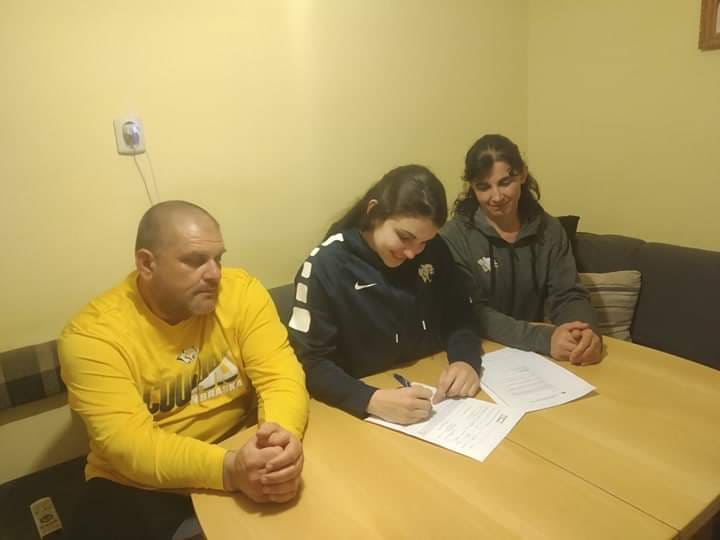 Now, after two years in Scottsbluff, Valcheva made it official of where she will continue to play, signing with the University of Texas San Antonio to continue her basketball playing at the Division I level.

“I picked UTSA because I felt that this program is the right fit for me and for my future accomplishments,” Valcheva said. “I really liked the coaching stuff, the place, the atmosphere from everything I saw, and I fell in love with the place. The decision came quick and I’m really excited for the next season.”

Valcheva’s signing happened back in her home country of Bulgaria with her family alongside to share in the special moment.

“I signed at home with my parents and my brother,” she said. “It was a small ceremony, but I was happy that I had the opportunity to share this moment of excitement and happiness with my family.”

Valcheva had many options, but UTSA just stood out.

“I really liked the school and the coaching stuff from the very beginning of our communication,” she said. “I had many other offers, mainly Division II schools, with whom I was communicating from earlier. To be honest, even if the decision came in the period of less than two weeks it wasn’t easy at all for me — I had many other good schools , which I liked the most, but I felt the best about UTSA, which remained my final decision.”

Valcheva becomes the second Cougar to play at UTSA. Morgan Broussard, who played volleyball for the Cougars from 2012-2014 and later was an assistant basketball coach under Chad Gibney during the 2017-18 season, attended UTSA to play volleyball from 2014-16.

Playing in the United States and at Division I school has been a dream. It is a challenge that Valcheva is ready to accept.

Valcheva had an outstanding sophomore season in helping the Cougars to a 28-2 record, a No. 2 ranking in the nation, and a No. 7 seed at the national tournament.

Valcheva finished her sophomore season averaging 12.3 points and 6.6 rebounds a game. She finished her career averaging 10 points a game and 5.7 rebounds. Valcheva scored 631 points and shot 32 percent from beyond the arc, popping n 36 3-pointers.

“I had an amazing sophomore season,” Valcheva said. “I had the best coaches and teammates and we accomplished a lot as a team by losing only two games, winning 28 of our 30, and leaving the Cougar palace undefeated. Individually, I was satisfied with my progress and I was seeing the improvement every single day, which came with a lot of work. I left my heart on the court this past season and did everything to help my team in WNCC. I feel really good and already nostalgic for the great season I had this past year.”

In fact, her two years were one of growth. She will take all that with her to UTSA.

“I had an amazing career and two years of experience at WNCC. I grew a lot as a player and as a person,” Valcheva said. “These two years would always remain the first years of my experience away from home. I had many ups and downs during these two years, but the whole time I had my family and friends, who were right there always to support me and to believe in me. It is also amazing and I want to mention that I only lost six games in my career as a Cougar, won more than 50 and left the Cougar Palace undefeated. Individually, I changed my game position in my sophomore year, I felt more comfortable and confident on the court, and I think that the results came on light.”

Valcheva said at UTSA, she wants to keep growing as a player.

“My goal at UTSA it to keep growing as a player and a person,” she said. “I want to keep working hard, to become a better basketball player, and a better and more responsible person. I would always strive to have good grades, to help the team and the program with my full potential and efforts.”

Valcheva is scheduled to report to UTSA on July 2, but as soon as the lockdown is lifted, she can start working out to prepare for her time as a Roadrunner.

“The summer conditioning would probably differ from the regular one due to the lock down and the emergency current situation. Once the things go back to normal, I would start do a special program of running, lifting, and basketball individual and team practices,” she said. “I’m supposed to report to UTSA on 2nd of July for the second summer session, which would provide the opportunity for a lot of individual workouts and conditioning.”

For Valcheva, the current pandemic situation wasn’t a problem with WNCC going to remote learning, where she was learning online in her home in Bulgaria. The problem she had was having to say goodbye to her teammates, coaches, and dorm family two months earlier than expected.

“It was really difficult to accept the difference of the current situation, because we have never seen or lived through something similar in our lifetime,” she said. “The online classes are not a problem for me as I’m doing everything and on time. Also, this semester I had more work to do at home than in the classroom.

“The most difficult part was to say goodbye to my friends, coach, and dorm family. By spending every single day with them, I really got used to have them in my life. We shared so many memories together, we got through so much together. By being so far away from home, they turned into my family and I hope that our friendship will last for a lifetime. I will really miss them, but I know that we will keep in touch and keep supporting each other, even from distance.”

In closing out her time at WNCC, Valcheva has a special thank you to everybody that helped her along the way.

“I want to say one big thank you for the people who I met and who became an inseparable part of my life. To all coaches, teammates, teachers, friends, and dorm family, thank you for believing in me, for supporting me, and for trusting me,” she said. “You helped me to grow as a better player and person, you helped me overcome the hard times and you were always there for me when I needed a hand. Thank you so much for everything you did for me, love you and will miss you a lot!”