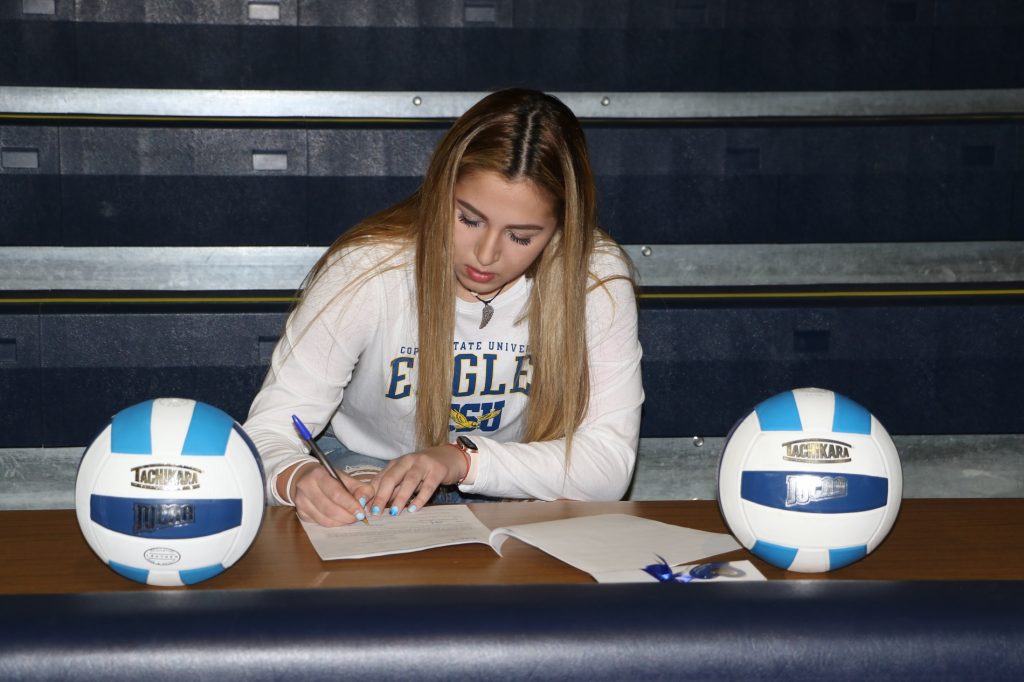 Western Nebraska Community College sophomore Andrea Tsvetanova will be taking her volleyball playing to the NCAA Division I level after inking with Coppin State University on Thursday.

Tsvetanova, who came to WNCC from Sofia, Bulgaria, said she is excited to be playing at the Division I level next year.

“It has always been my dream to play professional volleyball, but I wanted to get my education and my major first. I wanted to play and go to a DI and I think I have achieved that,” Tsvetanova said. “It is really exciting and I am really happy about this decision. They {NCAA/NJCAA) gave us an extra year because we can work more and improve and get better as athletes and a person.”

Coppin State finished 13-18 in 2019 and will open the season on January 30 when they travel to George Mason University.

Tsvetanova said the decision to attend Coppin was two-fold. First, it was closer to home as it is located in Baltimore, Maryland. Secondly, they gave her a good offer to play volleyball and get her education.

“With Covid and everything going on, it really is hard to find a school,” she said. “I knew I wanted to go to a DI school and as they texted me, I knew I had to keep talking to them and see what they can offer me. Thank you to Coach Binny who told me to accept the offer because I knew our season would come, but we may get offers and we may not, and I am really happy I got this offer.”

So far this season Tsvetanova is having a solid season. The Cougars opened the season going 3-1 in the WNCC Crossover Tournament over the weekend. In four matches, Tsvetanova is second in the nation in total assists with 146, only trailing Utah State-Eastern’s setter C. Dobson, who has 165. Tsvetanova ranks 11th in assists per game, averaging 9.73.

As a freshman, Tsvetanova finished with 426 assists with a 7.89 average.

She has improved since she last played in November 2019.

“For sure it did help us,” she said. “We work really hard and we have good coaches that are always there for us that prepare us for a higher level.”

Tsvetanova said it has been over a year since they have played and she and the team have been looking forward to starting the season January 22.

Those friendships she has garnered will make it hard for Tsvetanova to leave in May, but she will cherish all the friendships for a long time.

“We [the sophomores] are really close. We made really good friendships here that I think will last forever,” she said. “I just want to say a huge thank you to everyone like my coaches; to Coach Binny who gave me the opportunity to come here last year. I know I have my bad moments and everything, but they are helping me to get better. I want to say I love you all that are here. I am so thankful for you and I will never forget that.”

Tsvetanova plans to major in Exercise Science at Coppin State with a minor in psychology.