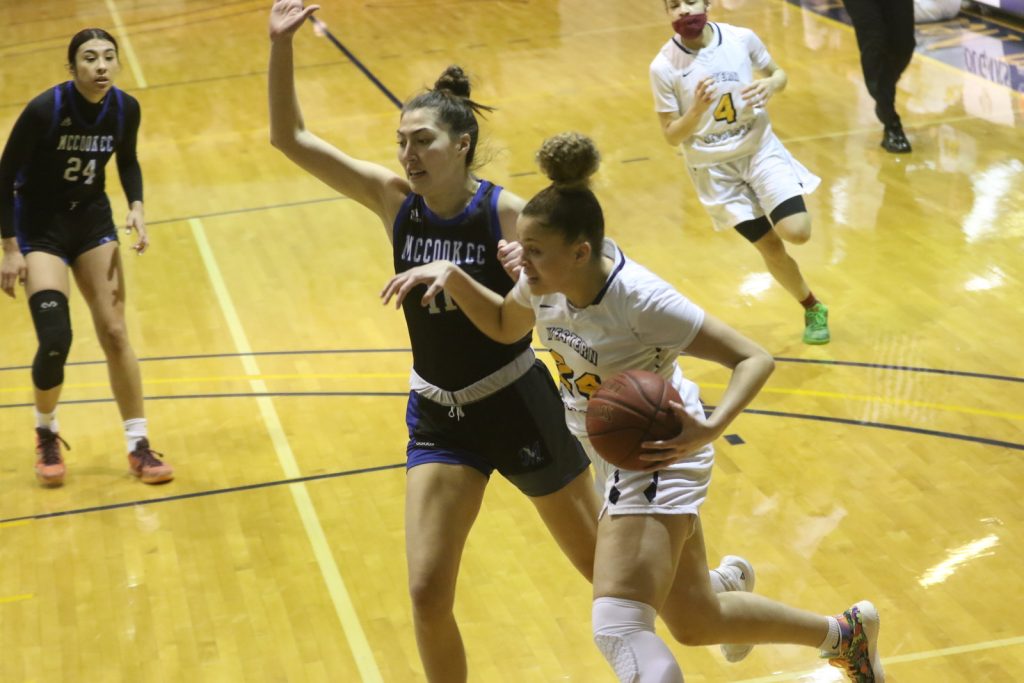 The 19th-ranked Western Nebraska Community College women’s basketball team outscored McCook Community College 56-19 in the second half to open up a close contest to win going away 89-46 in a South Sub-region contest Friday evening at Cougar Palace.

A big key in the Cougars’ win was 3-point shooting, especially in the second half. WNCC shot just 8 percent in the first half (1-of-12) from beyond the arc. The second half saw the Cougars ignite for 53 percent while burying eight treys.

Ky Buell led the way from behind the arc with three treys while Alejah Douglas had two treys.

Scoring was also widespread for the Cougars. On a night where Lidsey Mahoukou was held scoreless, WNCC put 11 players in the scoring column. Douglas led the way with 29 points including a perfect 9-of-9 from the charity stripe.

The first quarter saw WNCC jump out to an 8-0 lead behind six points from Douglas and WNCC went on to lead 13-2 after a Payton Fields 3-pointer. McCook came charging back cutting the lead to 13-9. WNCC led after the first 10 minutes of play 19-12.

McCook started the second quarter by slicing the lead to 19-14. The Indians kept battling as they cut the lead to 23-20 on a 3-pointer. WNCC pushed the lead back to seven points, 31-24, on a Panem old-fashioned 3-point play and went on to lead at halftime 33-25.

The second half was all WNCC. The Cougars defense held McCook to just seven third quarter points. WNCC held a 42-29 lead when the Cougars went on a 15-2 run as Buell had nine points and Shanti Henry nailed a trey. WNCC led after three 57-32.

The fourth quarter saw WNCC outscore McCook 32-13. The Cougars led 63-30 and went on a 10-0 run that saw WNCC jump to a 73-36 win. Moments later, Yara Garcia scored six points in a 90 second time frame and Madison Blaney finished off the scoring with a trey for the 89-46 win.

WNCC will be back in action Wednesday when they host Northeastern Junior College in a women’s and men’s doubleheader in a key South Sub-region match-up.