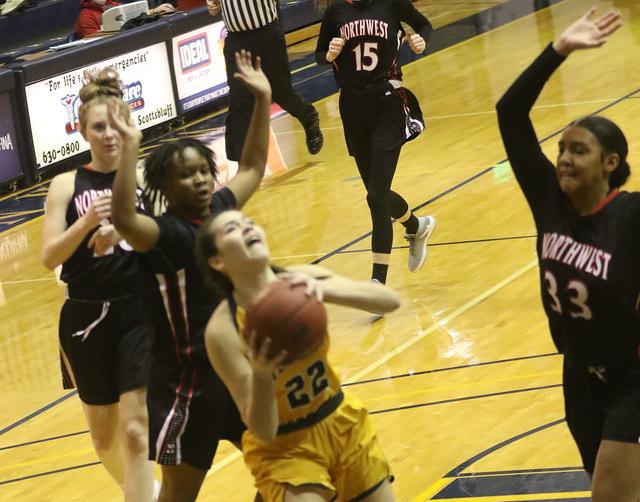 Mahoukou had the hot hand in the game, especially in the third quarter. Mahoukou had 11 of her game-high 28 points in the third, when the Cougars outscored the Trappers 33-18.

“The third quarter was huge for us to come out, make changes, and execute on both ends of the floor,” the sophomore said. “Defense wins games.”

Overall, she said they need to play four quarters.

“It wasn’t our best half but making adjustments and coming together as a team made a huge difference,” she said.

WNCC had a strong first quarter, jumping out to a 10-2 lead and then running to a 22-9 lead behind an old-fashioned 3-point play from Yara Garcia. WNCC led 22-12 after one period.

The second quarter was a little shaky for the Cougars. WNCC started the quarter with a trey from Ky Buell and then two free throws from Payton Fields for a 27-12 lead. Northwest came back on a 10-0 run to cut the deficit to 27-22.

The Trappers took their first lead of the night at 34-33 but WNCC regained the lead on a Madison Blaney bucket. Northwest went back in front, but a Mahoukou bucket to end the half gave the Cougars a 37-36 halftime lead.

Northwest lead early in the third quarter at 40-39, but WNCC came back to go on a 13-0 run behind back-to-back treys from Buell and Shanti henry for a 52-40 lead.

Mahoukou then put in three straight buckets as WNCC led 59-41. The Cougars led 72-54 after three periods.

WNCC couldn’t put Northwest away as the Trappers outscored WNCC 22-21 in the fourth. WNCC had an 80-59 lead after a Martrice Brooks bucket. Northwest came back to slice the lead to 80-65 and then got to within 11 at 84-73.

WNCC shot 40 percent for the game and had seven 3-pointers, led by Buell and Henry each with two.

WNCC was led by Mahoukou with 28 points followed by Alejah Douglas with 14 and Buell with 11.