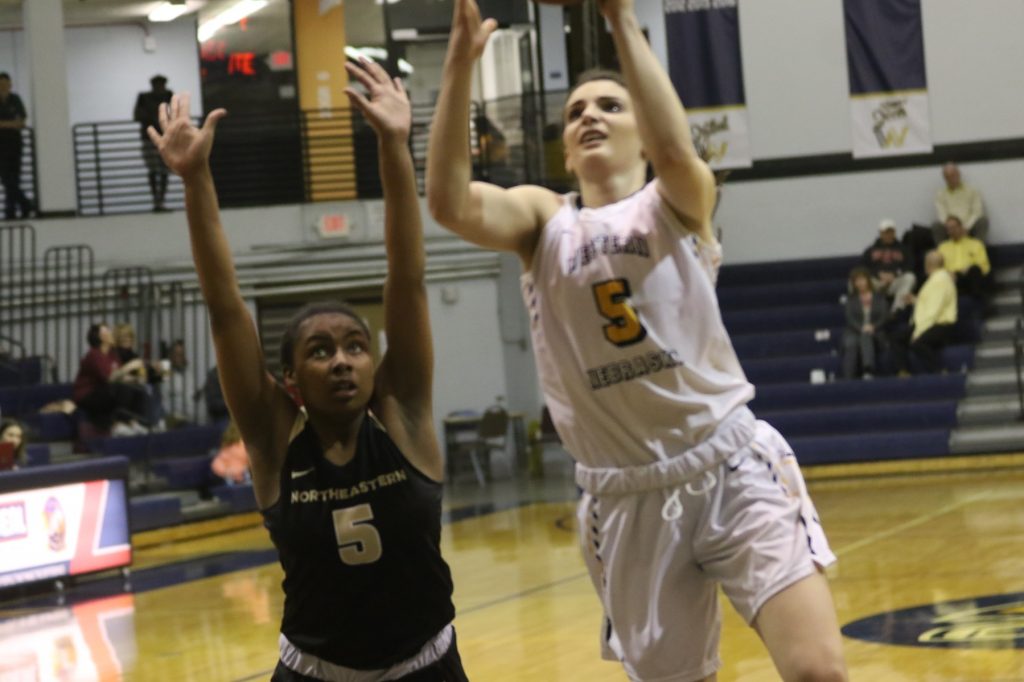 The Cougars, who won the last two of three regional titles and been to the national tournament the past three years, will open play at 1 p.m. Thursday against Sheridan College.

The semifinals are slated for Friday at 5 and 7 p.m. with the championship game set for 6 p.m. on Saturday. The winner automatically qualifies for the NJCAA national tournament March 17-21 in Lubbock, Texas.

Yuliyana Valcheva, one of four sophomores on the team, said she and the team are ready to get the show on the road.

“I’m really excited about the upcoming regionals and I truly believe that we would play hard and give everything for the regional title,” she said. “We have been doing a tremendous job and we need to keep going in the same direction.”

WNCC opens the tournament against Sheridan, a team they have beaten twice this season, winning 85-74 at Sheridan in the second game of the year and then winning a defensive battle 66-53 on Dec. 3 at Cougar Palace.

“Sheridan is a good team. We beat them twice in the regular season, but they are skilled and they also share the ball well,” she said. “Their style and principles differ from the standard, because they play a lot of the time with five players on the perimeter. We need to put a great effort in rebound and defense in order to win the game.”

WNCC must be focused when they head into the quarterfinals on Thursday. A big difference between Sheridan and WNCC is Sheridan played last weekend in a first-round game while the Cougars have been off for nearly two weeks without a game.

“The focus when going into the regionals this week is to stay trustful to our principles,” she said. “We need to put a great effort into this tournament, to defend, rebound, and run. We need to stay focused into our job, to follow the instructions from coach, and play our style of game.”

The direction the team has been going has been up. The Cougars are ranked second in the nation with their 26-1 record. WNCC has won 24 straight games, falling only to Hutchinson Community College in early November.

Since then the Cougars have been unbeatable especially at home where the Lady Cougars have won 51 straight home games dating back to January 2017.

Valcheva said this team has been successful because of how hard they play.

“In my opinion, our team was so successful because we really played hard this season,” she said. “We stayed together and won many tough games, by sharing the ball and playing until the last second of the game. The efforts are always rewarded when you work hard, stay consistent and trust the process.”

WNCC enters the game averaging 84.4 points a game while giving up 59.1 points a shot. WNCC ranks seventh in the country in scoring. Wabash Valley leads the nation at 95.4 points a game.

While the team is seventh in offense, the Cougars have the seventh best defensive team in the nation.

Sheridan is averaging just 68 points a game and they are allowing 62 points a contest.

Sheridan scored more than 80 points just once in February and that was in the first-round tourney game against Laramie County Community College when they beat LCCC 87-53 on Feb. 29.

But, to keep that offense going, Valcheva said they need to work as a team.

“We need to be consistent in our defense and rebound effort as a team. We need to stay together, support each other, bring positive energy and give everything from ourselves,” she said. “In order to win, we need to leave our hearts on the floor. We need to share the ball, knock down open shots, and be confident on the court. If we give our best, we would reach what we want.”

With all the success this team has had this year, Valcheva said this team can be proud of what they have accomplished during the regular season, but now it is the post-season and there are new goals on the horizon, including winning a regional title on the road.

“I think that the record we set throughout the regular season is tremendous,” she said. “We remained undefeated at Cougar Palace, and we fought really hard on the road games, by losing only one. The fact that we are ranked second in the country is definitely a reason to be proud and happy with what we have done through the year, but we also need to know that the most important part is yet to come.”

The top five ranking could be enough to get them into the tournament if they should happen to stumble at regionals as one of eight at-large teams. But that is not how they want to get in; they want to get in as a regional and district champion and give head coach Chad Gibney his third district coach of the year plague.

The Cougars have plenty of offensive weapons to make that goal a reality. A big reason for the offensive effectiveness is how well the team is willing to share the ball and pass to the hot hand.

“As I said, when the ball is shared, everyone gets the opportunity to score,” she said. “This also is a huge advantage for our team, because it is harder for our opponents to set their defense principles — we have length and we can score both outside and inside the paint. Everybody contributes for the success of the whole team and for the success of his teammates. I find this really special and amazing.

WNCC has four players averaging in double figures led by Tishara Morehouse, who is scoring at a 21-point average. She is ninth in the country in scoring and has connected on 76 3-pointers.

Valcheva is second on the team at 13 points followed by freshman post player Lidsey Mahoukou at 10.7 points and R’Manie Pulling at 10.6 points a game. Taylor Joplin is right behind at 8.5 points followed by Maddy Campbell at 6.1 points.

The Cougars bread and butter is their shooting, whether it is from inside or outside. WNCC has made 246 3-pointers this season. While Morehouse leads with 76 makes, Joplin has popped in 48, followed by Pulling with 31, Campbell with 29, and Valcheva with 28.

It is no secret that that Cougars have an explosive offense. But what goes unnoticed is the team’s defense. Valcheva said defense will be the most important factor in the team’s success at regionals.

“Defense is the most important component of winning the regional title,” she said. “The collective defense effort puts pressure on the other team, which could provoke mistakes and insecurity in our opponent. We press a lot, we are aggressive, which also opens a lot of opportunities in the offense as well. The defense principles are the key for our success this year.”

For Valcheva and the other four sophomores – Morehouse, Joplin, and Pulling, they would love to finish their Cougar career as back-to-back Region IX Champs. It is will be something special for Valcheva, who came to WNCC from Sofia, Bulgaria last year. Valcheva has been playing basketball since she was nine years old and started when she was in the fifth grade back in Bulgaria.

“I played seven years for my hometown basketball club Cherno more, Varna,” she said. “The European and the American game of basketball differ a lot — American basketball is really physical and more individual than the European. Before I came here, I have always tried to avoid the physical contact, to pass the ball more and to space the floor. I used to play only on the forward position. I didn’t have almost any experience on the wing as a perimeter player.”

She had flourished as a wing player and has come a long ways in two years of playing American basketball. Last season Valcheva averaged just 7.9 points a game and made just eight treys while shooting 60 percent from the free throw line.

What a difference one year makes. This season, Valcheva is averaging 13 points a contest and has connected on 28 treys and is shooting 75 percent from the free throw line. She has even increased her defensive game. As a freshman, she averaged 4,8 rebounds while this year she is pulling down 6.7 boards.

Valcheva said she grew a lot in her short time at WNCC.

“Personally, I believed that I grew a lot in these two years, not only as a player, but as a person as well,” she said. “When I came here, I had many difficulties to get adapted to the life here, both school and sport. I think I improved as far as having confidence on the court, thinking positively, supporting and leading my teammates. I also transformed from 5 [post position), to 3-4 (wing/forward position). Although I still have a long ways to go, I can feel the progress each day, which motivates me to work harder and harder.”

The confidence she developed while here in her game is the biggest reason for her fierce play.

“The reason for my play this year is the confidence and the experience I gained so far,” she said. “Last year I used to play mostly on the position five. This year I feel much more comfortable by having the opportunity to play on both 3 and 4. I feel much more comfortable with my skillset, with my decisions on the court and this is a result from the support from both coaches and teammates.”

When Valcheva came to the United States, it was the first time to the states. She made the decision to come overseas a quick one.

“I found out about WNCC when my head coach Chad Gibney connected with me in October of 2018,” she said. “He introduced the WNCC program to me and it was exactly what I was searching for – balance between good education and competitiveness on the basketball court. I made my decision quickly, because I felt that this is my place and that I’m going to improve there and show my full potential.”

Valcheva knew just one person at WNCC before coming over, too, and that was former Cougar Merle Wiehl, who is now at Santa Clara University playing basketball.

“i didn’t know anybody when I came here my first year. I have only talked with coach and had connection with one of my teammates from last year (Merle Wiehl) so I pretty much got to know everybody when I came in America.

When the Cougars head into regionals in Casper, a regional title would be the icing on the cake for the Valcheva and the rest of the Cougars.

“This season was really special for me. As a sophomore and a starter, I have much more responsibility for the success of the team,” she said. “I feel much more confident on the court and I always try to give my best for the success of the team. My sophomore season brought me special and unique experience and many good memories. I’m proud with my team for our success so far.”

That is why when the season is finished and she graduates in May, it is going to be extremely difficult for the 6-foot-1 forward to leave WNCC and the Scottsbluff and Gering community.

“I have so many memories from this place as my first experience away from home, in other continent. I met so many amazing people here; I found family in my teammates, my coaches, and my dorm family,” she said. “The support they provided to me was the key for my success here. The first place from regional championship last year would always be in my mind as the first championship won on the territory of the United States. It will be really hard to leave this place in May and to know that I’m not coming back next year – I will literally miss everyone and everything here – I will miss my teammates, coaches, dorm family, friends, Cougar palace.”