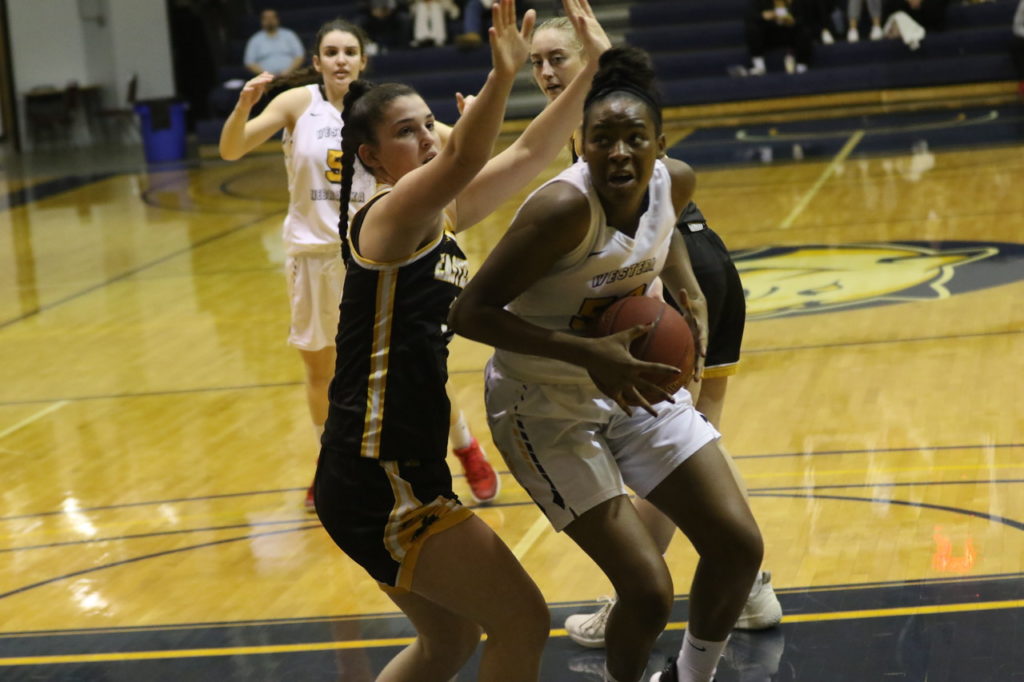 Both teams combined for 22 3-pointers and 77 rebounds in the contest. It was both teams third game in four days as well.

Taylor Joplin led the way for the Cougars with 17 points and five 3-pointers, while Paula Martinez-Sanz led EWC with 18 points and four treys.

The win moves the Cougars to 13-1 on the season and pushed their winning streak to 11 straight with two more contests to go before the break when they travel to Cheyenne, Wyoming, to face Laramie County Community College and the Colorado Ballers.

WNCC head coach Chad Gibney said his team has been tested and they keep finding ways to win.

“Eastern Wyoming is a really tough team. I thought they played really well tonight and made a ton of shots,” Gibney said. “We made some big plays down the stretch which was huge for us. We are thrilled to come out of here with a W.”

Gibney said this team has a way to win those close contests and Monday night was no exception.

“We have played a lot of close games this year and this was another close one,” Gibney said. “It seems we keep finding ways to win down the stretch of games. We have a group that has a little toughness to them. We are thrilled to get it done.”

EWC head coach Tom Andersen said his team played hard and was with WNCC until the final two minutes.

“I think we played pretty hard and the thing we didn’t do well enough was take care of the basketball,” Andersen said. “You have to give them a lot of credit, they are a great team and they are well coached. It was a good competitive game and we would have liked to come out on top, but it was a game that went back and forth and they ended up with the lead at the end.”

The contest was equally played with 10 lead changes and 12 ties. Andersen said WNCC got the lead late and then salted the game away.

“You get down with two or three minutes left and they have a three to four point lead with a guard as good as they have in Morehouse, it makes it really tough,” Andersen said. “We did get a couple shots and then we had a bad turnover. We could have got a little closer, but I can’t fault our players’ effort.”

The second saw WNCC tie the game at 22-22 only to watch EWC come back and lead 27-24 on a Emiliea Acelsson trey. WNCC went on a 7-0 run to take a 31-27 lead, The Lancers sliced the lead to one point a couple of times, but WNCC took a 40-35 lead on back-to-back buckets by Tishara Morehouse.

The third quarter was another slugfest. WNCC grabbed a 48-42 lead after Joplin hit two treys. EWC came right back to tie the game at 48 and then took a 57-52 lead on back-to-back treys from Acelsson and Martinez-Sanz. EWC led after three periods 57-54.

EWC fouth back to cut the lead to three at 72-69 with two minutes to play. But, WNCC hit a couple clutch free throws and an inside-the-paint shot from Lidsey Mahoukou for the win.

EWC out-rebounded the Cougars 41-36. Acelsson and Montse Gutierrez-Ibanez each had seven boards for the Lancers. WNCC was led on the glass by Morehouse with eight and Yuliyana Valcheva with seven.

The Cougars placed five in double figures. After Joplin’s 17, Morehouse and Pulling each finished with 15 followed by 13 from Mahoukou and 12 from Valcheva.

EWC had three in double figures. Martinez-Sanz had 18 while Gutierrez-Ibanez finished with 17 and Acelsson had 15.

WNCC, 13-1, will be back in action Friday and Saturday against two really good teams in Cheyenne, Wyoming, against LCCC and the Colorado Ballers.