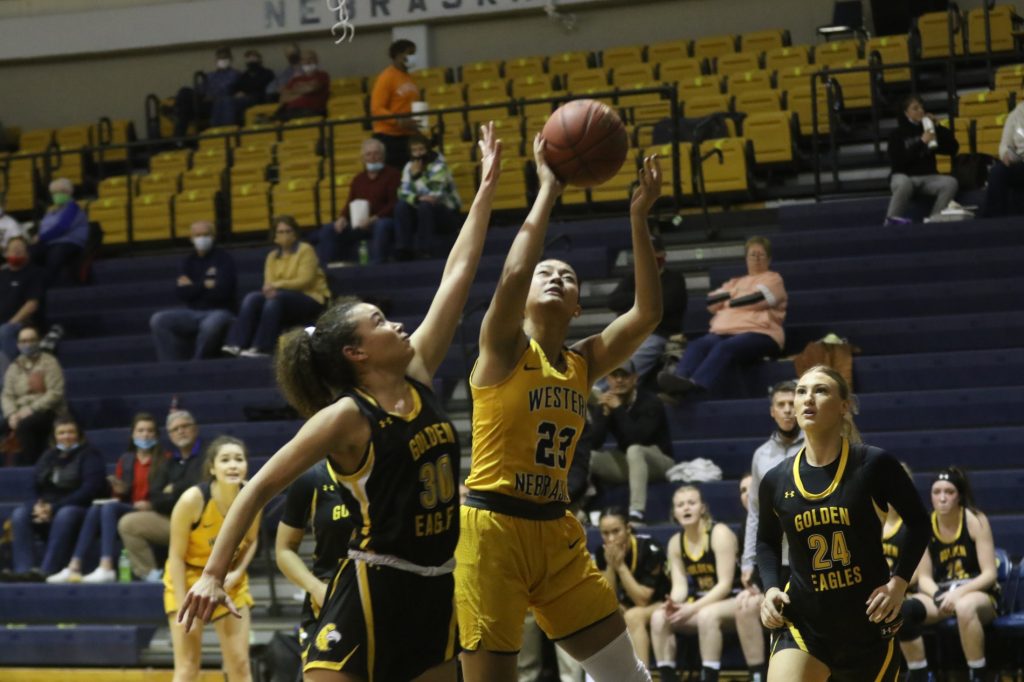 It was a Top 25 showdown and the College of Southern Idaho Golden Eagles hit clutch free throws down the stretch to fend of No. 14 Western Nebraska Community 81-77 Thursday at Cougar Palace.

WNCC sophomore Lidsey Mahoukou said the team played hard at the start, but started to play out of system in the fourth quarter, which led to the Golden Eagles win.

“We started the game playing really hard and we stayed in front of our man on defense with big aggressiveness,” Mahoukou said. “We ran hard on transition offense to get easy baskets which helped us to dominate on offense. The third quarter we started to play high on defense but that wasn’t a problem for us as we all had great communication. Yet, at the end of the game, we started to play out of control which gave them the opportunity to come back.”

The loss drops the Cougars to 4-1. Mahoukou said they can learn from this game.

“We’re taking this loss as a lesson and now we’re going to focus on the next game,” she said.

The game itself was evenly matched. The first half saw WNCC lead 22-15 after a Payton Fields 3-pointer. The Cougars went on to lead 22-18.

WNCC outscored CSI 18-16 in the third period. After trailing 48-43, WNCC went up 50-48 on five points from Alejah Douglas, including a trey. The Cougars kept playing well in the third, leading by their biggest margin of seven points at 57-50 on a big, old-fashioned 3-point play by Buell. WNCC led 59-53 late before CSI scored five points to close the third, trailing the Cougars 59-57.

The fourth quarter saw WNCC jump to a 65-59 lead early on a long 3-pointer by Buell. CSI would hold a 70-69 lead before WNCC scored five points on a 3-pointer by Fields and a inside bucket by Mahoukou to take a 74-70 lead with about three minutes to play.

CSI came storming back as they held WNCC scoreless for over two minutes as they went on an 10-0 run to lead 800-74 with 14.7 seconds to play. Douglas stopped the Cougars’ scoring slump with a trey to cut the deficit to 80-77 with 7.1 seconds to play. CSI’s Kaitlin Burgess sealed the win, hitting one of two free throws with 6.8 seconds left for the win.

WNCC only shot 37 percent from the field, but were 35 percent from beyond the arc (10 of 29). The 10 3-pointers that WNCC shot saw Fields get three, while Douglas, Buell, and Panem each get two. Sparaco chipped in one.

CSI had four players in double figures, led by Jordan Todd with 21 points and Karmelah Dean with 20. Kaitlin Burgess added 14 while Ashlee Strawbridge had 10.

WNCC was led by Douglas with a game-high 26 points followed by Buell with 13. Fields came close to double digits with nine followed by Panem with eight.

WNCC, 4-1, will next be in action Tuesday and Wednesday when they hit road to face Laramie County Community College on Tuesday in Cheyenne and then Casper College on Wednesday.