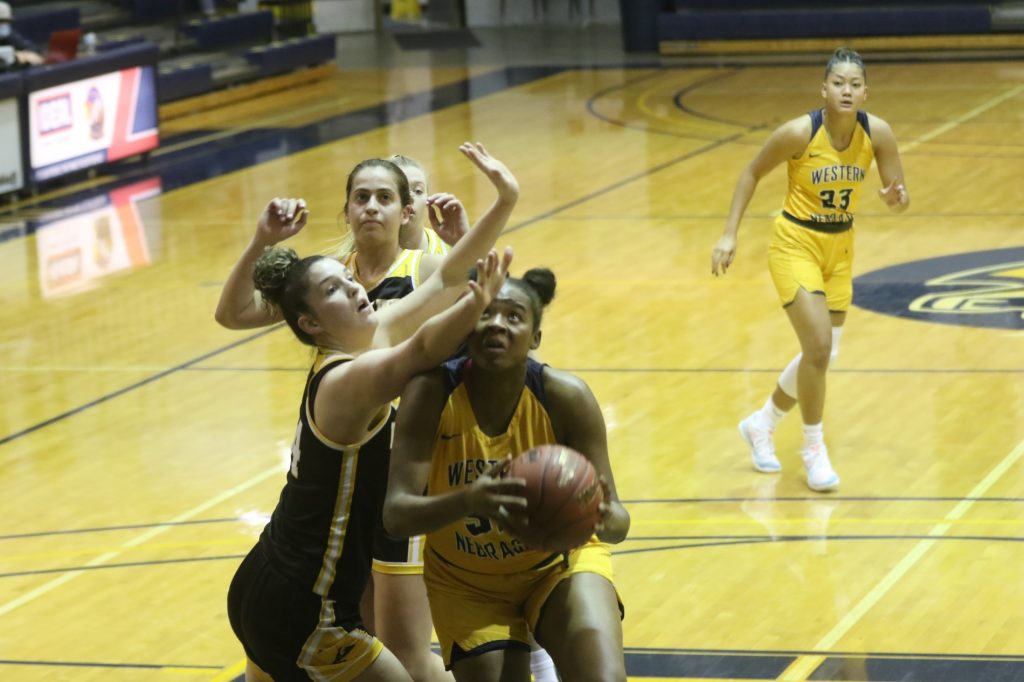 The win was the Cougars fourth straight on the young season as they prepare to host No. 25 College of Southern Idaho Thursday night at 5:30 p.m.

Ashley Panem, who had two 3-pointers with her 13 points, said the team play good enough to get the win.

“We started off strong, I didn’t think we played our best basketball, but it still got us the win,” the sophomore said.

A big key in the team’s win was starting strong as the two teams were tied early twice at five and seven points. It was after that last tie is where the Cougars heated up, outscoring the Lancers 20-11 the rest of the first quarter to take a 27-16 lead.

Panem said the key for the quick start is forcing turnovers.

“The key was forcing as many turnovers as we did,” she said. “Most of them we converted for points on our end.”

WNCC made just three of their treys in the first quarter off of buckets by Alejah Douglas, Payton Fields, and Shanti Henery.

The second quarter saw the Cougars heat up from beyond the arc, burying three more. All three shots came on a 13-0 run from Douglas, Fields, and Ky Buell to open a 42-19 lead. WNCC led at halftime 47-28.

The third quarter was just back and forth with the Cougars hitting just three treys. Panem hit the opening trey of the quarter and then Lidsey Mahoukou hit six points to push the lead to 58-35. WNCC led nearly by 20 points for the rest of the third as Henery hit two more treys as the Cougars led 68-50.

Things changed after that as WNCC went on a 10 run with some tight defense and clutch free throw shooting. Fields hit a trey during the run and Mahoukou finished off the run with 41.7 seconds to play with an old-fashioned 3-point play.

The Cougars’ 10 treys came from five different players. Henery and Fields each had three while Panem had two. Buell and Douglas each had one 3-pointer.

WNCC had five players in double figures led by Douglas and Mahoukou each with 16 points. Panem and Fields finished with 13, while Buell had 11 points.

EWC had just two in double figures. Natalie Kalaydjiev led the way with 23 points followed by Montse Gutierrez-Ibanez had 14.

WNCC’s game with CSI on Thursday will be a battle of ranked teams. Panem said they will need to play strong defense in the game to be successful.

“For Thursday, we need to lock in mentally and physically,” she said. “We need to play together and communicate so there aren’t any defensive lapses. Defense is the best offense.”