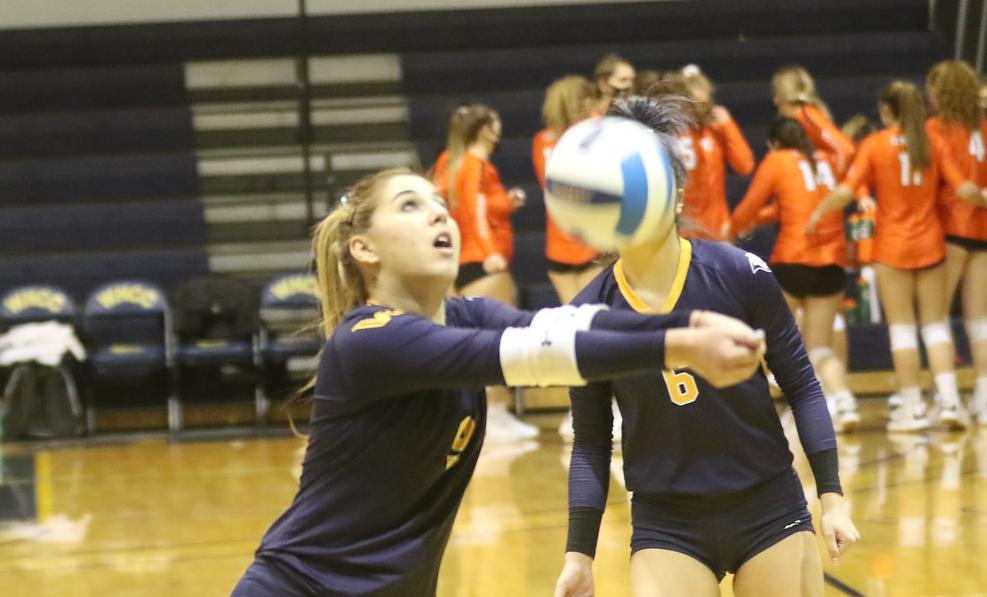 The Western Nebraska Community College volleyball team won three games over the weekend and made one of the biggest moves in the NJCAA national polls that were released, climbing seven spots and landing in the Top 5.

The Cougars, 6-1 on the season, rose seven spots from last week’s ranking of No. 12 to No. 5. Daytona State College had the biggest jump in the rankings, moving 10 spots from No. 17 to No. 7 this week.

Sophomore Olivia Schaub said the move to No. 5 came as a surprise to the team.

“Finding out that we are ranked 5th in the nation was such a surreal moment,” Schaub said. “It feels amazing to even be in the rankings at all, so to be in the top five is such an honor. We have been working very hard for this and I am just really proud of my team and coaches.”

The Cougars trail four other teams in the polls. Miami Dade College remained No. 1 with their 5-0 record. Odessa College jumped to No. 2, up three spots, while former poll runner-up Snow College moved to No. 3. Navarro College is No. 4.

Utah State-Eastern, the team the Cougars beat in the opening weekend at WNCC’s Crossover Tournament, is No. 6.

Two other Region IX teams are also ranked. Northeastern Junior College is ranked 8th with a 5-2 record while Eastern Wyoming College moved up four spots in the poll to No. 12 from No. 16 last week.

Schaub said the top five rankings will make the team work even harder because they know the target just got bigger on their backs.

“This ranking is definitely going to put a huge target on our backs,” she said. “Every single team we play is going to want to beat us, so we have to prepare mentally and physically for the rest of the season. We want to do everything we can to stay where we are at or keep moving up.”

Schaub believes the reason for the big climb is the competition they have played, plus beating No. 6 Utah State-Eastern helped as well.

“I believe the reason for the climb in polls is because of our record (6-1),” she said. “Also, we just finished 3-0 at a tournament in Riverton, Wyoming, this past weekend. We also beat a highly ranked team (Utah State-Eastern) at our home tournament last week.”

In other ranking news, the WNCC women’s basketball team fell in this week’s Division I basketball rankings. The Cougars, who lost to College of Southern Idaho on Thursday, fell from 12th to 22nd in this week’s poll.

The top five teams in the women’s basketball poll remain in the top five, but in a different order. Trinity Valley Community College remains at No. 1 followed by Northwest Florida State College. Chipola College moves to third followed by South Georgia Technical College up to No. 4. South Plains falls to No. 5.

The WNCC women will get back on the court Tuesday and Wednesday with road games. The Cougars will travel to Cheyenne, Wyoming, to face Laramie County Community College and then hit the road to meet up with No. 10 Casper College on Wednesday.

WNCC will then have a busy time the week after when they travel to Eastern Wyoming College on Tuesday before hosting a 3-day tournament Feb. 11-13. That weekend, Northwest College will battle Central CC-Columbus on Thursday. WNCC will play Friday when they face Northwest College while Central-Columbus faces Lamar Community College. Saturday’s action will pit the Cougars against Central-Columbus with Lamar facing Northwest in the other game.