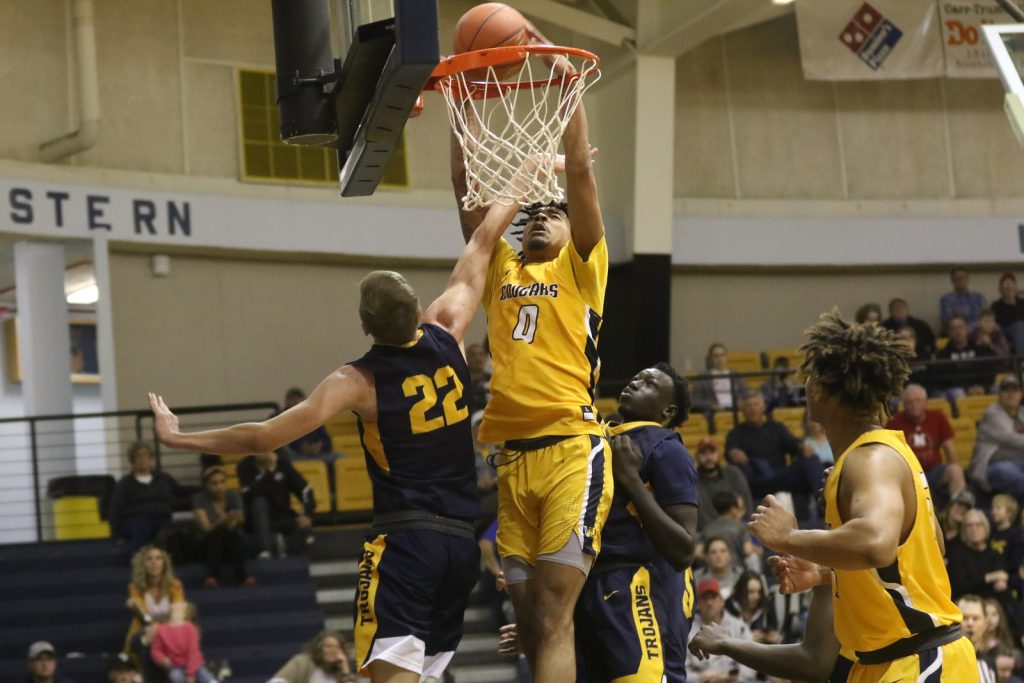 The win moves the Cougars to 18-11 on the year and advances the Cougars into the quarterfinals of the Region IX tournament next Thursday in Sterling, Colorado.

WNCC head coach Cory Fehringer said it was one of their better games from start to finish.

“I thought overall throughout the intensity was high through the majority of the game. With the lack of depth, there will be a series of possessions where maybe we are not engaged mentally and physically where we need to me. But I am definitely proud of our team, the resiliency they have shown throughout the year to compete no matter the circumstances.”

The Cougars are a dangerous team to face in the reginal tournament even with the lack of depth that they have right now. Saturday, the Cougars put four players in double figures and buried 21 of 26 free throws and also won the rebounding battle 40 to 32.

“This team has a chance to win any game they are in across the country,” Fehringer said. “We can also give up the choice to give up second opportunities to not get back in transition that could hurt us. But, to the credit of these kids, they continue to get better each and every day and Western Nebraska and the Panhandle should be proud of the resiliency they have shown throughout the year.”

It was obvious from the get-go how much the men’s team wanted the win. WNCC exploded out of the gate on a 10-0 run including six points from Teddy Allen and four from Elie Cadet, the two sophomores on the team.

WNCC pushed the lead to 20-5 on back-to-back 3-pointers from Conner McCracken and Kalen Williams. It was then the Cougars went a little bit into hibernation mode as Trinidad came back to slice the lead to 32-30 with under five minutes to play.

But, just like that, the Cougars reversed the momentum with authority, going on a 13-0 run that was highlighted by a Williams old-fashioned 3-point play and a big dunk my Allen to lead Trinidad 45-32 at halftime.

Fehringer said this team can score in bunches, but they can also give up points in bunches. Saturday afternoon, it was the Cougars putting together the runs.

“‘They have a tendency to go on big runs, but we have a tendency to give up big runs,” Fehringer said. “Momentum-wise, we find energy and continue to play off one another to build good momentum. A series of defensive lapses puts us in a tough position. Hopefully the consistency continues to service as we head down to Sterling.”

The second half saw the Cougars come out and grab a 55-37 lead, capping the run on a Cadet dunk.

Trinidad tried coming back, but all they could do was get to within nine points at 68-59. The Cougars defense and offense took care of the rest in keeping the score at double digits the rest of the way.

WNCC was led by Allen with 27 points. The Nebraska recruit also pulled down seven rebounds and dished out six assists. Allen went 8 of 9 from the free throw line.

Cadet had one of his best games as a Cougar this year, finishing with 21 points. Cadet also pulled down seven boards and was 5 of 6 from the free throw line.

Also hitting double digits was Kalen Williams with 18 points. Williams had five assists. Kenny Strawbridge had 13 points in the win with four rebounds and two steals.

Strawbridge had two big back-to-back 3-pointers when Trinidad started to make a run, cutting the lead to 10 at 75-65.

In other scores in the first-round, the closest game was at Gillette College where Gillette needed a shot with 1.2 seconds left to down Eastern Wyoming College 66-65.