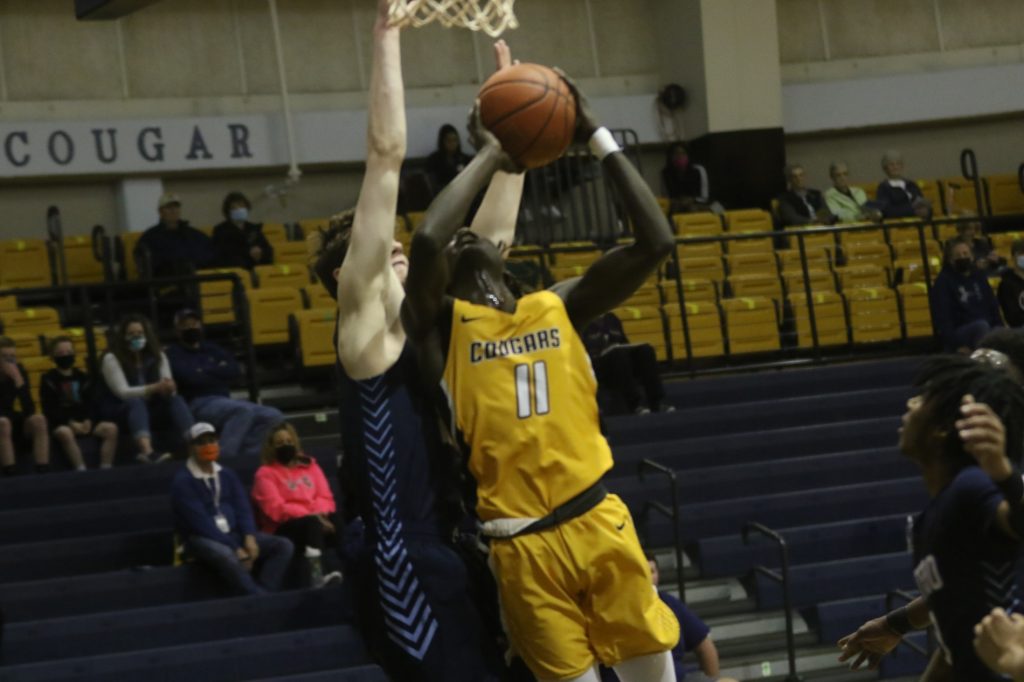 The Western Nebraska Community College men’s basketball team found themselves by 17 points with about six minutes to play and made a furious rally, just falling short against Otero Junior College 98-93 Sunday afternoon at Cougar Palace in a south sub-region contest.

WNCC head coach Billy Engel said his team has plenty of fight, but said they need to avoid other teams from getting big leads.

“Anybody that has watched us play can walk away and say that these kids play hard and they compete,” Engel said. “They never give up and that is something to be proud of, but it has been an issue of ours all year that we don’t turn the switch early enough. Most of the year we talk about we are young and have a lot of freshmen, but at the end of the year we are going to get beat like that when we don’t have it going and try to make a comeback late. But, it is a good humble pie for us going into the post season.”

Otero had six players in double figures for the game, including their leading scorer Lonnell Martin with 27. Martin only had four points at halftime, but finished with seven 3-pointers.

WNCC had four players in double figures. Chase Thompson led the way with 24 points, including going 10 of 14 from inside the arc. Tyler Mack also had 18 points with four treys, while Carter Brown had 17 points with five treys. Agwa Nywesh tallied 15 points on the day.

WNCC tied the game at 24 on a bucket by Thompson with 8:40 to play in the first half. WNCC never could get the lead as the teams traded bucket back and forth. Otero grabbed a 43-37 lead with under a minute to play in the half but WNCC’s Issad Solano picked up the defense and scored two straight buckets as the Cougars trailed 43-41 at halftime.

The second half is where the Cougars started slow as Otero came out on fire, hitting practically every basket they shot in grabbing a 58-46 lead. Otero pushed the lead to 71-57. Brown and Mack hit back-to-back treys to bring the Cougars back to withing eight, but Otero responded with another run to go up 83-70 with about five minutes to play.

WNCC then picked up the intensity and made the game very interesting. The late run started as Mack hit a trey. Otero answered as they led 93-77 with just under four minutes to play. WNCC sliced the lead to single digits as Nywesh and Mack made back-to-back treys to bring WNCC to within 93-84.

The Rattlers hit a bucket and then the Cougars started to rain in treys as Nywesh nailed a trey followed by a trey by Brown with 43 seconds to play to bring WNCC to within five, 95-90. Otero hit two free throws, but WNCC’s Brown nailed his fifth trey of the game with 26 seconds to play to make it 97-93. Otero hit one free throw with 25.7 seconds and WNCC couldn’t get any closer.

After that, the Cougars will turn to the post season as they will either host or travel for a first-round play-in game next weekend. The Region IX tournament start April 8 at the site of the North champion, which could be either Laramie County Community College or Eastern Wyoming College. Both those teams play Monday night in Torrington.

Engel said he is watching the conference race a little bit, but it doesn’t matter who they play because the post-season is taking one game at a time.

“I am taking a glance and seedings a little bit, but I am trying to keep the guys focused on handling one day at a time,” he said.