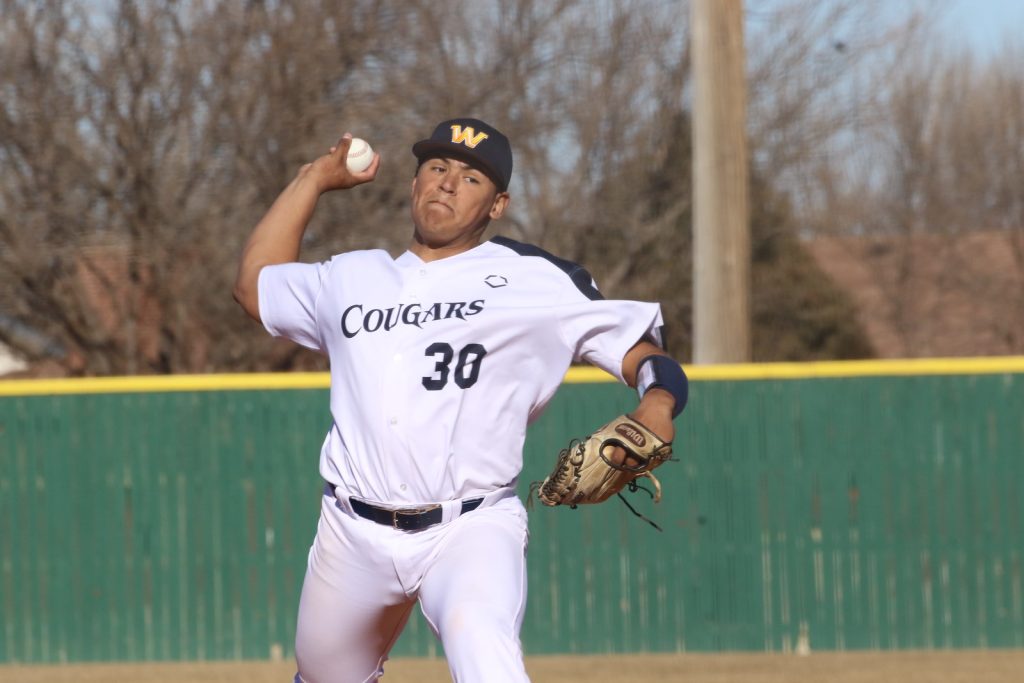 The first game saw WNCC receive stellar pitching from Dawson Hurford and Caden Eyeman and the offense erupted for 19 runs, 11 of which came in the second inning, in rolling to the 19-4 win.

The second game saw Panduro toss a strong contest, allowing just one hit while striking out four as the Cougars registered the 11-0 win. The only hit Panduro allowed was a lead-off single and then after that, the sophomore righthander along with the defense shut down the Luna offense.

WNCC head coach Mike Jones said it was a complete team effort from fine pitching and big offensive performances at the plate.

“We definitely came out today and made some progress,” Jones said. “We definitely changed up our approach a little bit with a lot more line drives and ground balls and created more scoring opportunities.”

Jones was also pleased with the pitching.

“We had really good pitching performances,” he said. “Dawson was great. Paul was great. It was an excellent team effort all the way around.”

WNCC took control of game one from the start, scoring a single run in the first and then plating 11 in the second inning.

Joey Olson started things with a 2-out walk and scored on a Jayden Orozco double for the 1-0 lead.

The second inning saw WNCC score 11 times on four hits. Matt Womack, Dillon Fabricus, and Joe Kinneberg all loaded the bases with free passes. Womack and Fabricus each scored on a wild pitch for a 3-0 lead. Luis Alcantara made it 4-0 with a run-scoring single.

Orozco made it 5-0 with a run-scoring single. Four more walks forced in three more runs for a 8-0 lead. With the bases still juiced, Kinneberg tripled to rightfield scoring three for an 11-0 lead. Kinneberg made it 12-0 after he scored on a Caleb Coats single.

The third started with Olson ripping a double. Orozco and Rollins each walked to load the bases. JT Cafferty was hit by a pitch to bring in one run. Felton then doubled to score two for a 15-2 lead. Fabricus singled to score two more for the 16th and 17th runs of the game. Riley Schanaman scored the 18th run as he singled home Fabricus.

The Cougars added one more in the fourth as Fabricus delivered a single that scored Cafferty for the 19-2 lead. Luna scored two in the top of the fifth, but it wasn’t enough.

WNCC had 11 hits in the contest. Fabricus and Jayden Orozco each had two hits. Fabricus had two singles with three RBIs and three runs scored. Orozco had a double with two RBIs and two runs scored.

Felton had one hit, a double and led the way with three RBIs and two runs scored. Kinneberg also had three RBIs with his triple while scoring twice.

The second game saw the Cougar offense pick up where they left off in game one, scoring nine times in the first inning and then added single runs in the second and third innings. That was all they needed behind Panduro’s stellar pitching.

The offense started as Jordan Rollins doubled. Joey Olson was then plunked by a pitch. After Rollins scored steals home on a double-steal, Orozco doubled home Olson for the 2-0 lead. Womack then doubled in a run for a 3-0 lead followed by a run-scoring single by Felton for a 4-0 lead.

WNCC then loaded the bases with two outs and Rollins came up clutch with a grand slam over the rightfield fence for an 8-0 lead. Caleb Coats then tripled and came in to score the ninth run of the game on an Olson single.

WNCC made it 10-0 in the second when Felton scores on a wild pitch.

The third inning saw Rollins score the 11th run off an Olson double.

Rollins and Olson each had two hits. Rollins had a double, home run, four RBIs, and three runs scored. Olson finished with a double, two RBIs and a run scored.