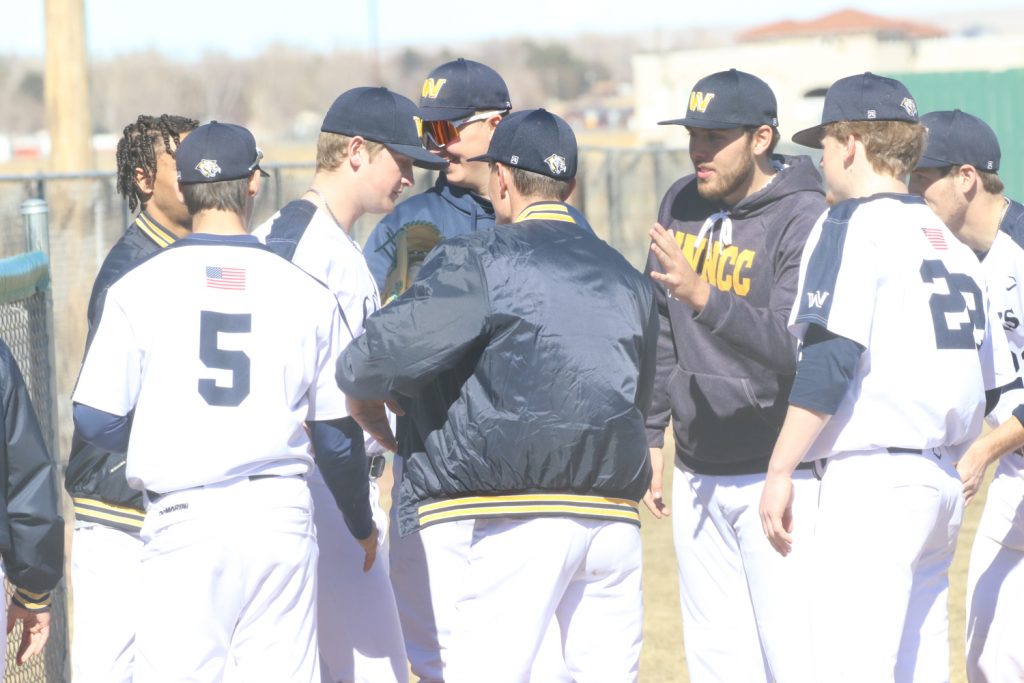 The first game saw Luna score seven early runs and held back a WNCC furious comeback to edge the Cougars 9-8.

The second game saw the Cougars score seven fourth inning runs while hitting four home runs and then received stellar relief pitching from Noah Baumann and Owen Vantillo to give the Cougars the 12-10 win.

Luna scored first with two in the first inning, but WNCC answered with two of their own in the bottom of the first as Joey Olson ripped a 2-run home run.

Luna followed with three in the second to go up 5-2 and then another two runs in the third for a 7-2 lead. WNCC added a single run in the third and then added seven in the fourth for the 10-7 lead.

The fourth inning saw the Cougars load the bases with one out. Sergio Tanango scored on a wild pitch and then Jayden Orozco rips a 3-run home run tie the game at 7-7.

WNCC wasn’t through. Matt Womack, Dillon Fabricus and Jack Jones all earned free passes to load the bases. Quinn McCafferty scored the go-ahead run as he got a free pass. Tarango then singled in two runs to put the score at 10-7.

Luna added two runs in the sixth to slice the Cougar lead to 10-9. WNCC added two insurance runs in the bottom of the sixth as Caleb Coats and Luis Alcantara had back-to-back, 2-out home runs to make it 12-9.

Luna added one in the seventh and had two runners in scoring position when Vanthillo got a strike out to end the game.

WNCC was outhit in the second game 16-9. Womack and Sergio Tanango each had two hits in the contest. Womack had a double with a run scored, while Tanango had two singles with two RBIs and a run scored.

Olson had three runs scored with two RBIs along with a home run.

Also blasting home runs in the win were Alcantara, Coats, and Orozco.

The first game saw the Roughriders score five runs in the first two innings and then held a 7-3 lead after three innings. WNCC scored one in the second and fourth and two in the third to trail Luna 9-4.

WNCC scored one in the second as Michael Felton singled home Matt Womack. The Cougars added two in the third as Kinneberg doubled and scored on a passed ball. Alcantara came around to score on a Orozco single to cut the Luna lead to 7-3.

The Cougars added a single run in the fourth as Felton scored on a passed ball.

It wasn’t until the sixth that saw WNCC make a big comeback, scoring four runs. It all started as the Cougars loaded the bases as Felton and JT Cafferty each singled and Womack walked. Kinneberg followed with a walk to force in one run followed by Caleb Coats doing the exact same thing to make the score 9-6.

WNCC then hits into a double play, but scores another run. After two free passes, Coats scored on a fielder’s choice hit to cut the lead to 9-8.

WNCC finished the game with nine hits compared to 10 for Luna. Michael Felton led the way with a 3-for-3 contest with two runs scored and an RBI. Joe Kinneberg had two hits with a double.

WNCC and Luna will face each other in another doubleheader Sunday in La Junta, Colorado. WNCC will then return home for a 9-inning game on Wednesday against Northeastern Junior College.