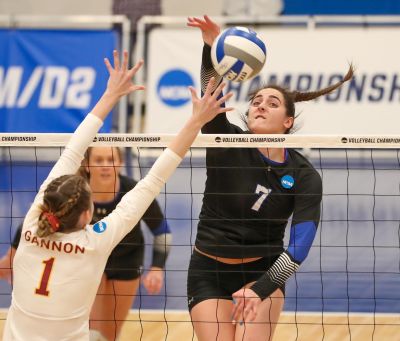 Kearney, Neb. – The second-ranked Nebraska-Kearney volleyball team recorded 14 blocks and got kills from eight different players to down Gannon University (19-25, -22, -17, -15) in a national quarterfinal match Thursday night in Denver, Colo.

The Golden Knights (30-8) came out firing BB’s from the service line, back row and all over the court. Against a UNK defense that is among the nation’s best in hitting percentage (.112) and digs per set (212GU smashed home 18 kills and hit .366 (18-3-41) to win by six. The Knights, getting seven early kills from senior Ally Smith, trailed only 1-0 and also dug up 20 balls.

Gannon had 14 more kills in set two but UNK got out to leads of 6-3, 12-4 and 18-13. Senior outside Julianne Jackson (Bonner Springs, Kan.) started to come alive, having seven kills in nine attempts with zero errors (.778 pct.) with junior right side Mary Katherine Wolfe (Omaha Marian) providing five kills in seven swings. Back-to-back kills by Jackson and Wolfe made it 23-17 and then another Jackson kill and unforced GU error ended the set.

Gannon’s hitting efficiency went down as the match went along, falling to .025 (13-12-41) in the third as UNK recorded six of its 14 team blocks. Four different players had two apiece including three by junior setter Madison Squiers (Kearney Catholic). A 4-0 Loper spurt erased a 14-13 deficit and featured two blocks and a Wolfe ace. The Golden Knights struggles continued as they eventually fell behind 21-15 with three UNK points coming unforced attack errors.

Kearney closed the night out by getting out to a 12-6 lead in the fourth. Gannon hung around but four different Lopers had at least three kills in this set including redshirt freshman outside Sami Mauch (North Platte). And senior middle Josie Cox (North Platte) came up big with three stuffs and a kill.

Gannon managed eight more kills, 56-48,  but also recorded 15 more attack errors, 14 of the unforced variety. The Knights did serve up seven aces but had none over the final two sets while having eight service miscues. Finally, UNK dug up 66 balls and almost had 11 more blocks than the GU.