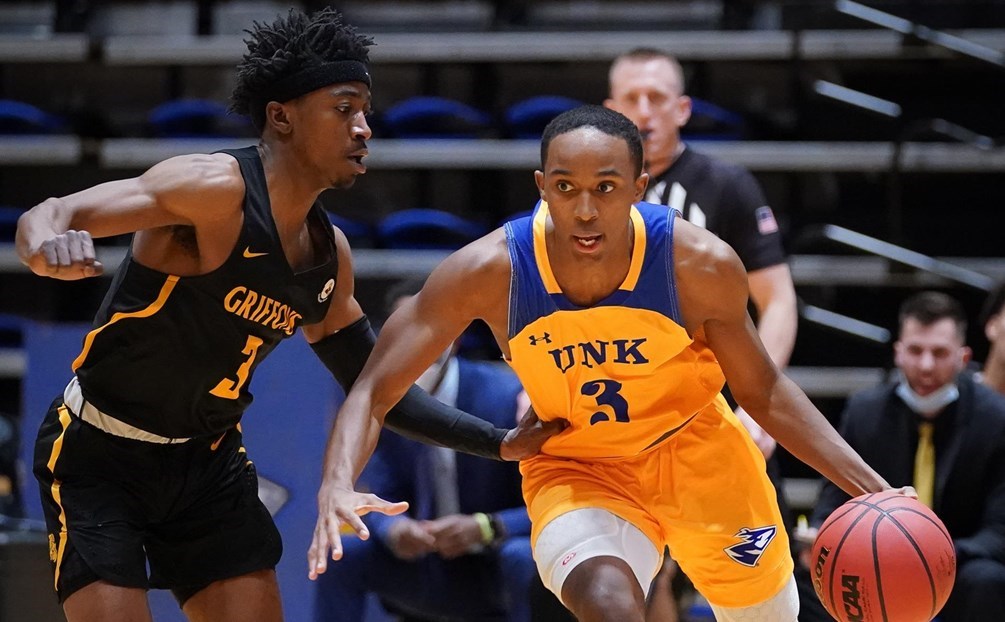 The Lopers (4-6), for the 16th time in its last 17 outings, played a game decided by 10 points or less while handing the Griffons just its second setback. Mo West (8-2) was coming off a 74-67 win over previously unbeaten Washburn.

“It’s a really big win for kind of a young team. We have some new faces and guys in new roles. For them go out and play as well as they did, to beat a team of that caliber … this is a huge shot in the arm for us,” Loper head coach Kevin Lofton said.

UNK, leading for nearly the entire way, held the Griffs 17 points below its season scoring average, went 11 of 29 from behind the arc, was plus seven on the glass, sunk 12 of 15 free throws and overcame the loss of starting point guard Sam Morris (Lincoln SE) who is out with injury.

Senior RJ Pair (The Colony, Texas) started in place of Morris but was dinged for two early fouls. Redshirt sophomore Myles Arnold (Fontana, Calif.) was the next man up and he responded to the tune of 16 points, five rebounds, four fouls drawn, three assists, and tough defense on MWSU star Tyrell Carroll. Arnold tallied 29 minutes of work; he had logged 41 minutes in five previous appearances.

“Myles has patiently been on the bench waiting for his opportunity. He started the first two games (when UNK was down three starters due to COVID protocols) … we got Sam back and he kind of runs the point for us,” Lofton said. “He made a huge splash for us. The Myles you saw today was the Myles we recruited. He showed a swagger tonight and has been practicing better of late. He’s started to understand our system and what we’re looking for.”

The Griffons fell behind early and used a full-court press to lead 25-24 at the break. Throughout the night the press yielded stretch of turnovers by the Lopers but also plenty of open looks. UNK started the second half 7 of 12 from downtown to lead 51-36 with 11:01 to play.

However, MWSU outscored UNK by a 28-14 margin over the next nine minutes to more than get back in it. This long stretch featured five of the Lopers 18 turnovers with the Griffs, led by Carroll (game-high 19 points), attacking the basket at every turn. After Carroll missed a three with 2:04 left, Alliance senior post Austin Luger stuck a jumper outside the paint to make it a two-possession game. Arnold followed with two made freebies with Utah senior guard Jake Walker securing the win by going 4 of 5 at the line over the final 1:03. MWSU ended the just 12 of 20 from the charity stripe.

“(Down the stretch) I was thinking here we go again. But it got to a point around the four, three-and-half minute mark where the deer in the headlights look started to go away,” Lofton said. “We started to make plays and Jake stepped up at the free throw line.”

Walker and New Zealand junior Matt Brien joined Arnold as Lopers with 16 points. Walker made eight free throws and drew seven fouls with Brien going 4 of 7 from the arc. This ties his season-high, set earlier in a win over Fort Hays State. Next, Luger had nine points, eight rebounds and four assists with Utah junior Darrian Nebeker having a big first half off the bench (six rebounds & five points) and Bellevue lefty Cedric Johnson having a big second half (11 points & six rebounds).

Before fouling out late, Carroll reached his point total by going 8 of 17 from the floor. The Millard South grad also had seven rebounds, drew seven fouls, five steals, and three dimes. Reserve Q Mays (15) and starter Caleb Bennett (12) were the other Griffs in double figures.

“Last Saturday (vs. Central Missouri) was high tempo, mostly man-to-man defense, and going at each other. Today was all zone against us. That’s one of the challenges going from game to game … you have to switch gears,” UNK head coach Carrie Eighmey said. “Anytime you play against a zone and don’t shoot it great it’s going to be challenging. We didn’t shoot it well tonight but we found ways to manufacture enough points.”​

Missouri Western (2-7) didn’t score until hitting a deep three with 1:33 left in the first quarter. However, their morphing zone gave UNK some trouble in the early going. Up 13-5 after 10 minutes and 18-17 late in the second quarter, several transition buckets eventually got the Lopers rolling. A 21-2 run encompassing the end for the first half and second of the second featured six quick points by reserve forward Shiloh McCool (Pleasant Hill, Ia.).

“Shiloh gave us a great boost. Our bench was big … that’s the beauty and magic of our team. We have a lot of people who can step in and gave us some good minutes and a boost when we need it,” Eighmey said. “In that second quarter Shiloh was really big for us.”

“We needed close to a shoutout in the first quarter because we were struggling to score early. They do a good job of making something look open but it’s not really open,” Eighmey said. “It took us a little while to get accustomed to it. We eventually settled in and got a lot of open shots.”