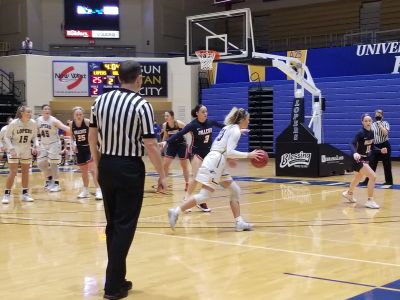 Kearney, Neb. – Junior post Brooke Carlson had 19 points and nine rebounds and Nebraska-Kearney once again was stingy on defense to roll past Rogers State, 60-40, Friday night at the Health & Sports Center.

The Lopers (5-0) have now held all five opponents under 54 points with the last three failing to reach 49.  , minus leading scorer Samariah Thompson (21.2 per game) due to injury, falls to 1-5.

UNK never trailed and roared out to a 21-9 first quarter lead. The Lopers went inside early and often to Carlson (Elkhorn) who attempted a career-high 20 shots. While RSU went on a mini-run in the second quarter to get within five UNK held a double digit lead over the final 26 minutes.

“Our offense is a work in progress. It’s slowly getting better but I still don’t think we’re shooting it as well from the perimeter as we will,” UNK head coach Carrie Eighmey said. “We’re getting open shots but they aren’t falling yet. We had to get a little creative and find some other ways to get shots at the rim.”

“Usually at this time of the year teams aren’t where they want to be defensively. But our defense is what we’ve been leaning on,” Eighmey said. “It’s something we can control. It’s a lot of effort, willingness to give energy, be disciplined and takes communication. Our team has continuity and a lot of returners so we’ve kind of picked up from where we left off.”

Carlson reached her point and rebounding totals in 26 minutes. All nine of her caroms came on the defensive end with South Dakota junior Klaire Kirsch grabbing eight boards, seven being defensive. Off the bench Kansas junior forward Elisa Backes had 12 points, four rebounds, two blocks and sunk two of the team’s five threes. She also went 6 of 6 at the line.

“Brooke did a good job of making herself available especially early in the game. Most of her shots came in the first half … if something is working why go away from it,” Eighmey said. “Elisa had a pretty good day too. Offensively she was as good as she has been all year.”

UNK hosts Northeastern State on Sunday afternoon. The RiverHawks (1-4) fell by an 80-60 score tonight at Fort Hays State.
Kearney, Neb. – Rogers State shot an even 50 percent from the field and had four starters score in double figures to edge Nebraska-Kearney, 66-60, Friday night at the Health & Sports Center.

An NCAA Tournament team a year ago, the Hillcats from Claremore, Okla., improve to 2-4 while the Lopers fall to 1-5. All four of RSU’s losses have come against teams that have spent time in the Top 25 this winter. Meanwhile UNK’s last three losses have been by a combined 16 points.

“We’re right there. It’s a broken record when you look at the last three games. We’re playing some talented teams especially when you look at Central Oklahoma and the size Rogers has,” UNK head coach Kevin Lofton said. “We’re just a play or two away. Some of that is confidence … finding a way to win one of these close ones so the guys that were in development roles last year can start believing in themselves.”

The game featured eight ties and seven lead changes with neither squad holding a double digit lead. UNK led for 12 minutes in the first half with the ‘Cats leading the final 14. An 11-3 spurt made it 50-43 at the 8:46 mark and featured scoring by five different RSU players.

UNK, which out rebounded a much bigger Rogers team, hung around and had a three from the right wing with 31 seconds left that would’ve made it just a one-point deficit. However, the ball hit iron and RSU sunk the subsequent free throws to push its lead to 64-58.

“We’re probably three or four plays away in the last five minutes from having a couple more wins. We just have to finish,” Lofton said. “Sooner or later we’ll turn the corner and once we do the confidence will blossom from there.”

Senior wing Brewster Peacock had 10 of his team-high 14 points in the second half with guards Darraja Parnell and Devin Pullum each scoring 10 and combining for 10 assists. Finally, sophomore guard Jett Sternberger had 13 points and two of RSU’s four triples. The ‘Cats finished 24 of 48 from the field and 14 of 15 at the line.

UNK was once again led by Alliance senior Austin Luger who had 17 points and four rebounds. He hit six shots from the field and played a team-high 39:41. Next, Utah senior guard Jake Walker had 13 points and made all three of the Lopers triples with Bellevue southpaw Cedric Johnson supplying nine points, four steals and three boards. As a team Kearney went 13 of 15 at the line and was 3 of 18 from behind the arc.

“Conditioning has been big for us. Night in and night out we try and be the best conditioned team on the floor,” Lofton said. “Right now our rotation is a little shorter than I would like. I thought Cedric came in and gave some quality minutes and made some plays down the stretch.”

The Lopers hosts Northeastern State Sunday at 3 p.m. The RiverHawks fell to 1-4 as they lost at Fort Hays State tonight, 81-76.