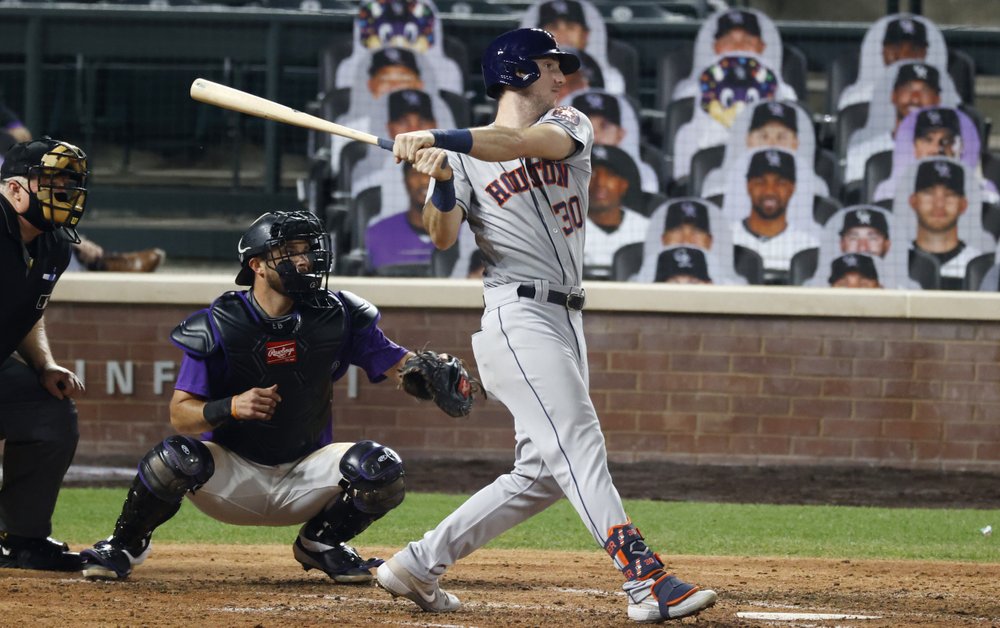 Carlos Correa homered among his three hits, and George Springer and Martin Maldonado also went deep for Houston. The Astros had a season-high 20 hits to back a strong outing from Framber Valdez (2-2).

Houston third baseman Alex Bregman left the game with a right hamstring injury after doubling to right field to lead off the fourth inning. He started limping as he approached first, jogged to second base and immediately was removed from the game.

“I felt it when I was running down the line to first base, right about when I was going to make the turn to second,” Bregman said. “Disappointed. I want to be out there every day, playing with my guys. I was starting to feel pretty (darn) good. Think right now just go with it day to day and see how it feels (Thursday).

“I’ll get it evaluated, day to day and see what happens. Who knows, maybe I’ll be playing here pretty soon.”

Abraham Toro came into run for Bregman and finished with two hits.

Valdez held the Rockies to a run and five hits through seven innings before faltering in the eighth. He left after allowing three runs, just one earned run, on seven hits in 7 2/3 innings.

Tucker followed Correa’s homer in the fifth with a triple, had a two-run triple in the sixth, singled in the four-run seventh and finished his night with a two-run homer in the ninth.

“He had a big night tonight and we need Tucker, especially with our injury situation,” manager Dusty Baker said.

“One pitch away and this is a completely different ballgame, but I’m happy with my body felt, with the way I was responding, and with just how I’m building each start,” Castellani said.

Castellani allowed five runs on eight hits in 5 2/3 innings after giving up just a single run in 8 2/3 innings over his previous two starts.

“The pluses were I think his stuff was solid again, the velocity was there, and breaking ball,” Colorado manager Bud Black said. “They waved at a few of them, we got them in a good spot. He did fight out of a couple jams.”

“You have to have huge offensive nights here in this ballpark. You’re never really comfortable,” Baker said. “Since I’ve been coming here they’ve always made a run in the eighth and ninth inning. It was fortunate for us that we could havesome cushion.”

Rockies: OF David Dahl was placed on the 10-day injured list — retroactive to Tuesday — with lower back soreness. Colorado recalled INF Brendan Rodgers from the alternate training site. Rodgers entered the game in the eighth inning and had a two-run single in the ninth.