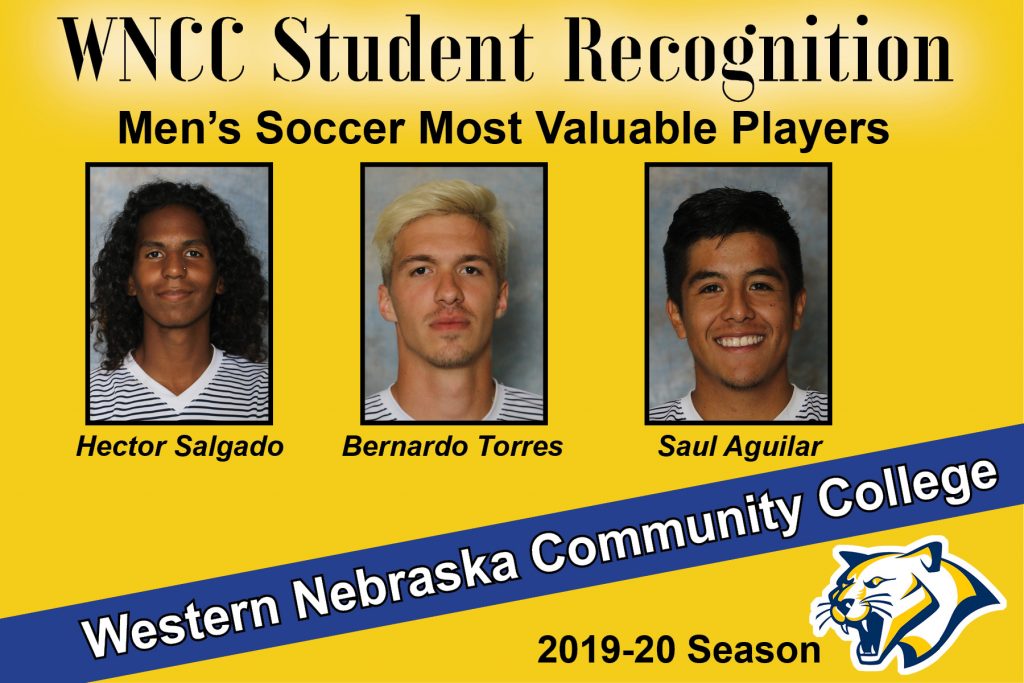 The Western Nebraska Community College men’s soccer team made it to the semifinals of the Region IX tournament last fall and three sophomores stood out.

The MVP honors for the three symbolizes what the three meant to the team according to Torres, a sophomore from Brazil that signed to play at Briar Cliff University next year.

“I think that the MVP means that we had such an influence to the team, both inside and outside the fields,” he said. “I had a great year. I am thankful for every single one of my teammates and the hard work they put into practice. I think we could of done more but we got pretty far on the tournament, being always a strong team in our conference.”

Torres scored three goals and led the team in assists along with Aguilar with five. Aguilar and Salgado were the two big scorers for the Cougars this year, leading the team with five goals each. Aguilar finished with 15 points on the season while Salgado had 10 points.

Aguilar, who is from Denver along with Salgado, said the MVP honor goes to everyone that was there to help him this season.

“Well, first of all, I want to thank everyone that was part of this journey; this MVP award goes to everyone that was there for me, supported me, and battled with me on the field,” Aguilar, who signed to play at William Wood College for the next two years, said. “I am very thankful for the coach and team I had because without them none of this would’ve happened. This MVP award means a lot for me and it just means I need to work harder to maintain that level.”

It was a special team, too, since Aguilar said the sophomores knew they had to step it up because they had to replace some sophomores from two years ago that were dynamite on the field.

“This year was a year that us sophomores had to step up because we lost very important players like Ramses, Silvio, Thomas [from the previous year] who are players that can change the game in seconds,” Aguilar said. “So, we had to step up and make sure we sent the same message for the next Cougars. I think we did a pretty good job this year and became more family and supported each other at every moment.”

Salgado was surprised that he received the MVP honor with all the talent on the Cougar team.

“I’m going to be honest; I was in shock when I received the award,” Salgado, who signed to continue his playing at Knox College, said. “I never thought I would be able to get such an award as this one. It’s such a good feeling to be such an important member of the team. Last year, I started off as a redshirt in the first week. To be named the MVP the following year just puts me in awe. I couldn’t have done it without my teammates as well as my fellow MVP winners.”

All three MVP winners said the team made it to the semifinals of regionals because they were like a family. That is the key in succeeding on the field.

“Our team last year definitely had the talent to win the region, and we made it far because we played with heart and for each other,” Salgado said. “It genuinely felt like a family and I couldn’t be happier. My teammates around me made me get confidence to be able to perform as well as I did this year. I definitely felt like I could have had a better year, probably around eight goals, but I wasn’t consistent enough. That is something I’ll be working on for next season. This team performed well and I’m proud of them.”

All three players had a chance to play with each other one final time during the spring and they were looking forward to connecting one final time. But, the corona virus pandemic didn’t allow them to play any spring games and that was something that made things hard to accept.

“It was really sad to me,” Torres said of how his sophomore season ended. “Soccer and my friends/teammates are everything and being away from them is something that I don’t like at all. I wish we could have been all playing the spring season, finishing studies together and then, when the time to go would have come, say goodbye properly. It was a hard time having to leave friends earlier than expected, not being able to practice, socialize. I hope everyone is doing good and being safe. I wish all my teammates luck and strength for next season.”

Same with Salgado who was heartbroken that he didn’t get to play one last game with his teammates in April.

“It is hard because of the unfortunate circumstances of the coronavirus and it didn’t allow us to give proper send offs and goodbyes to the people you battled with for the whole year,” Salgado said. “It is definitely heartbreaking. But I know everyone is staying safe and putting good work for the offseason.”

Aguilar said with the way the year ended, he still looks upon his two years at WNCC as proud to be a Cougar.

“I was really sad we didn’t have the chance to be able to play our last game, our last stay in the hotel with my teammates, or our last bus drive. I was really looking forward on having that last moment because that’s when you enjoy them more,” he said. “It was really upsetting knowing we were not going back to school and getting to enjoy our last moments at WNCC. Finally, I want to thank Coach Todd Rasnic and my teammates for making this season one of the best ones I have had and it was a great experience to be part of that family. One thing I will always say and be proud of is I will always be a Cougar!”