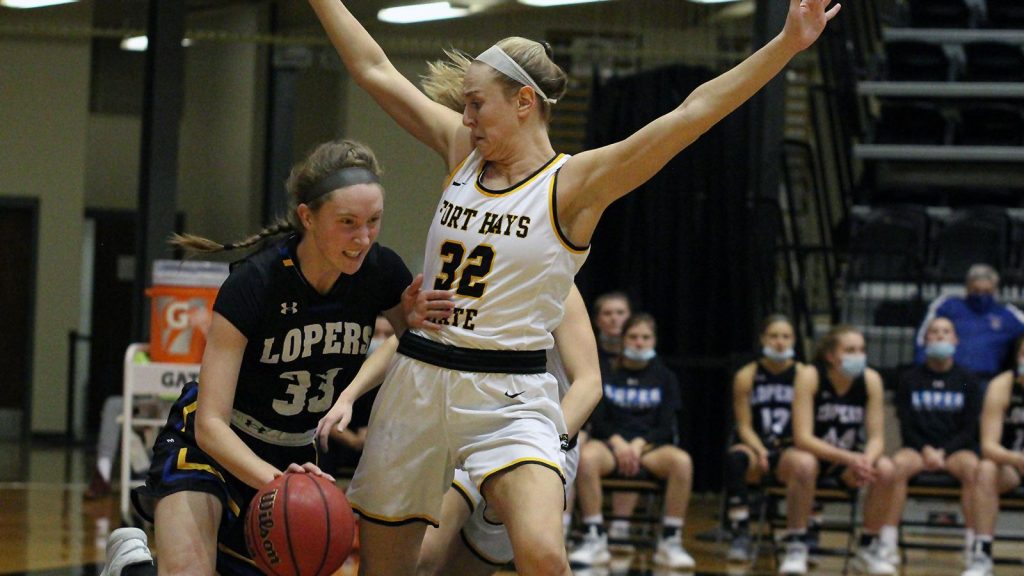 After being held to a season-low 49 points on Thursday night the Lopers had one of its better offensive halves. UNK shot 59 percent (13 of 22) from the field and sunk all six free throw attempts to lead 22-12 and then 34-30 at the break. The Tigers hung around and made a late second quarter run thanks to taking nine more shots. They also were 5 of 5 at the line.

“I thought the change in the game came in the second quarter when we had a chance to extend it. But we just didn’t make the right (offensive) reads. We didn’t get it inside enough,” UNK assistant coach Devin Eighmey said on the KRVN radio postgame show. “A little bit of that comes from youthfulness and not having your senior point guard (Haley Simental) out there.”

In Thursday’s 61-49 win the Tigers outscored the Lopers 23-9 in the second quarter. They got close to that with a 19-9 margin in the third, starting the half on a 17-6 run. That game-changing stretch saw the Tigers grab seven of the first eight rebounds and sink two of its four threes. A put back bucket by six-three Lincoln freshman Olivia Hollenbeck made it 47-40 with 3:03 to play but UNK made a move midway through the next quarter.

“We were focused and ready to go and good enough to win today,” Eighmey said. “Third quarter we just did things that’ll get you beat like not boxing out. They also made plays when they needed to.”

UNK trimmed an 11-point deficit to four, 59-55, by the 3:16 mark after a turnaround jumper by junior forward Elisa Backes (Salina, Kan.). Neither team would score for the next two minutes with the Lopers missing a shot in the lane and having a turnover. A Backes block gave UNK another crack at it but Hollenbeck responded with a swat of her own with 1:11 to play. It was a jump ball situation and the Tigers got it back and then saw Hollebeck convert a three-point play soon after. The Lopers didn’t get closer than six points in the final minute.

“We had 48 shots but turned it over 16 times. We get too deep (on offense) and we talked about that at halftime,” Eighmey said. “Late we had some uncharacteristic things . You just can’t go … you need quality possessions late in the game.”

Oklahoma State transfer and senior guard Jaden Hobbs had 10 of her team-high 17 points in the second half. She also drew eight fouls and had six assists in playing almost all 40 minutes. Next, Hollenbeck had seven of her 11 points in the second half with senior wing Whitney Randall at 16 points thanks to two triples. Finally, starter Cydney Bergmann and reserve Katie Wagner had 10 apiece.

The Lopers ended up shooting a season-best 50 percent (24 of 48) but was just 3 of 16 from behind the arc. Elkhorn junior Brooke Carlson had a big day to the tune of 16 points on 8 of 10 shooting. Backes had 12 of her 14 points after the break with Iowa freshman reserve guard Meg Burns having a season-best eight points and drawing two fouls in the first half. Finally, South Dakota sophomore guard Trinity Law had eight points, seven dimes, four boards and drew three fouls in another start. 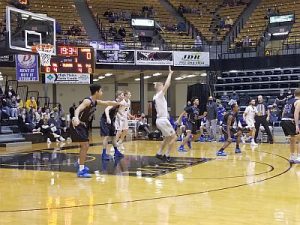 Hays-Kansas. – The Fort Hays State Tigers sunk a season-high 13 three pointers and got an unlikely performance from reserve Jordan Pumphrey to pull away from Nebraska-Kearney, 79-68, Saturday evening in Kansas.

This marks the fourth straight year the two longtime rivals split the season series, each winning on its home court. Hays is now 5-8 while UNK falls to 5-9.

The Lopers came in as one of the MIAA leaders in three-point percentage defense (28.6) with the Tigers averaging just 33 percent from the arc. However, those numbers went out the window as Hays stuck 13 of 26 treys including a 6 of 10 effort after the break. A dunk by redshirt freshman guard Kaleb Hammeke broke a 52-52 tie and started a 18-4 Hays run that featured two triples. UNK didn’t get the deficit closer than nine after that five-minute explosion.

“In the first half we pretty much dominated but in the last five minutes they were able to come back and go in ahead two,” UNK head coach Kevin Lofton said on the KRVN radio postgame show. “They jumped on us at the start of the second half but we fought back. At about the 10-minute mark we had a one-point lead … then they hit the gas and we didn’t respond very well.”

A 6-4 junior guard, Pumphrey had tallied 54 points over the first 12 games (4.5 avg.) thanks to eight made threes. He made 9 of 11 shots tonight, going 7 of 9 from long distance, while adding five rebounds and two assists in 25 minutes. He was equally effective in both halves, having four threes in the first and three more in the second.

“We had great spacing, the ball was moving, players were moving. That’s how we came back and took the lead,” Lofton said. “Coming out of the timeout that ball movement stopped, the player movement stopped and we just weren’t as sharp. We also had a couple of defensive breakdowns.”

Hays senior forward Jared Vitztum, averaging a double double on the year, went for 22 points and six rebounds. He made 9 of 14 shots with the Tigers ending the night at 52.6 percent (30 of 57).

“(Pumphrey) got a couple to go early. The first one, okay, I get it … after that he hit two straight against our zone. At that point we should’ve identified him and done a little bit better job,” Lofton said. “It’s just something you can’t let happen if you’re going to come on someone else’s home court and beat them.”

UNK was a respectable 9 of 25 from the arc and had three score in double figures. Alliance senior forward Austin Luger made 8 of 17 shots to score 18, Utah senior guard Jake Walker went 7 of 7 at the line to tally 17 with Texas senior guard RJ Pair hitting two three to score 12 off the bench. Walker also had five assists with Luger at six boards and two steals.

“We have too many stretches right how where we have blown defensive assignments or maybe we get the right play call and get the shot we need but we’re not converting,” Lofton said. “We had good looks throughout the course of the game even during their hot stretch. We couldn’t them to go.”