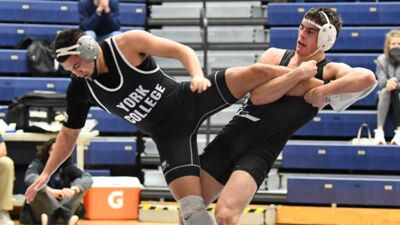 SIOUX CITY, Iowa – In the final outing prior to conference tournament, the Concordia University Wrestling team came away with three individual place finishes while competing at the Sioux City Dave Edmonds Open on Saturday (Feb. 6). Ten Bulldogs took part in the event hosted by Morningside. They combined for 19 wins, including four via fall.

Head Coach Levi Calhoun’s squad concluded its dual schedule this past Thursday when it fell at home to York College. Concordia hopes Saturday was a step towards reaching peak levels two weeks from now.

“It was kind of the same story as Thursday. We had three freshmen placers,” Calhoun said. “I’m excited with the way those guys are continuing to improve. TJ Huber in particular has come a long ways since he joined us. I think the entire team would agree that he’s the hardest worker on our team. It’s nice to get him to his first college final.”

Scdoris put together a 4-2 tournament, two days after he knocked off a nationally-ranked opponent from York. The Milford, Neb., native toppled three GPAC foes (two by major decision) as part of a successful run.

“He’s turned a corner here lately,” Calhoun said. “He’s really worked on getting better at little things. He had such a dominant high school career and there was an adjustment to the college level. He’s figuring it out and getting better. He’s enjoying the sport and having fun with it. We’re pumped to see how he continues to develop.”

Telles has reached an impressive milestone in pushing his season win total to 30. He did so by recording four wins on Saturday – one by pin. After falling in his first match, Telles rebounded with four-straight victories while advancing to the heavyweight third-place bout.

Eight of the ten Bulldogs to wrestle at the Edmonds Open notched at least one win. Jose Sanchez (157) and Tavoris Smith (165) turned in three victories apiece. One win each was put on the board by Mason Garcia (197), Cyrus Marshall (184) and Andrew Reid (174). Garcia and Reid both picked up one pin.

Now it’s all about prepping for the 2021 GPAC Championships that will be hosted by Midland on Feb. 19-20. Each team is allowed to enter 12 wrestlers into the conference tournament. Calhoun led the program to a GPAC postseason championship in 2020.