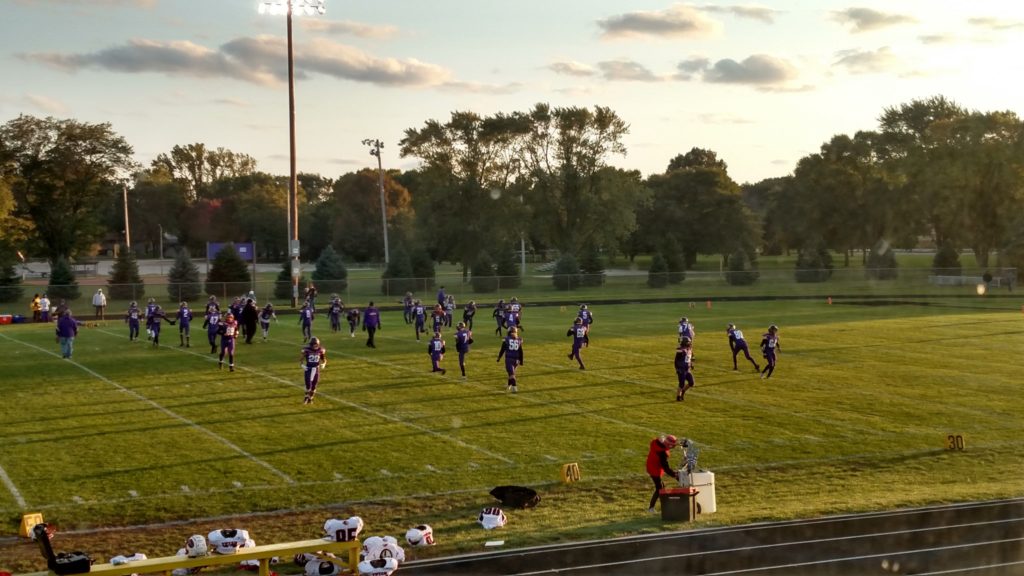 TEKAMAH- In high school football aired on 107.9 The Bull Friday night, Tekamah-Herman hosted Yutan in a rematch from a year ago that saw the Tigers knock off the then defending state champion Chieftans.

Yutan was able to exact revenge this year, outgunning Tekamah-Herman in a Friday night shootout, 41-36.

The Tigers started the game with the ball and scored first when Luke Wakehouse broke loose for a 71-yard touchdown run, the PAT made it 7-0.

Yutan answered back on their first possession, with QB Brady Timm plunging in on a one-yard sneak, tying the game 7-7.

Tekamah-Herman was forced to punt on their next drive, giving Yutan the ball on their own 42. The Chieftans would score again when Timm dashed into the end zone on a 23-yard bootleg. The PAT made it 14-7 Yutan.

The Tigers would end the first quarter with the football, driving into Chieftan territory, before losing a fumble on the Yutan 47.

Yutan capitalized on the Tiger turnover, when Timm connected with Dillon Marht for a 37-yard touchdown pass. The PAT made it 21-7 Yutan.

Tekamah-Herman was able to answer back on the next drive with another big scoring play, as Luke Rogers got away for a 53-yard scoring run. The PAT cut the Tigers’ deficit to 21-14.

Yutan was able to drive down inside the Tekamah-Herman 10-yard line, when the Tiger defense was able to hold on fourth down, forcing the turnover on downs, giving them the ball on their own 10.

A couple of plays later Wakehouse reached paydirt again when he scampered free for an 81-yard touchdown run. The Tigers missed the PAT however, and trailed 21-20 with 30 seconds left before halftime.

The Tigers went with an onside kick and recovered, trying to take a lead right before the intermission. The Tigers drove down to the Yutan 20 before time expired, sending the game into halftime with Yutan leading 21-20.

Yutan started the third quarter with the football, and they drove to the T-H 27, when they were again turned away on fourth down.

The Tigers regained the lead when Wakehouse scored on his third big run of the night, this time from 59 yards. The Tigers converted the two-point attempt, and now led 28-21.

After the kickoff, Yutan scored on the very next play, a 68-yard touchdown pass from Timm to Sam Petersen. The Chieftans missed the PAT, keeping the lead in Tekamah-Herman’s favor, 28-27.

Then craziness ensued on the following kickoff. Wakehouse received the kick for the Tigers, and on the return, he ran into a pile. While resisting to be tackled, the ball was knocked out of his hands and into the air. Yutan’s Isaiah Daniell caught the ball out of the air and returned it 40+ yards into the end zone for a touchdown. The Chieftans made the two-point conversion, and the score was now Yutan 35, T-H 28, with 6:42 left in the third.

The Tigers again drove into Yutan territory, before losing their third fumble of the night.

The Chieftans once again took advantage of the turnover, this time on a nine-yard run by Caden Egr. Yutan converted the two-point try again, and the score was now 41-28 in favor of Yutan.

Tekamah-Herman took over at their own 45 with 10:03 left in the game. The Tigers drove the field and scored again on Wakehouse’s fourth rushing touchdown of the night, this one from four yards out. The Tigers made the two-point conversion, and were back in the game, trailing now 41-36 with 6:40 left.

The Tigers were unable to get a stop on defense, however, and Yutan was able to move the ball and run out the clock, preserving the final score of Yutan 41, Tekamah-Herman 36.

The Tigers fall to 2-5 on the year with the loss and will host Louisville next Friday.