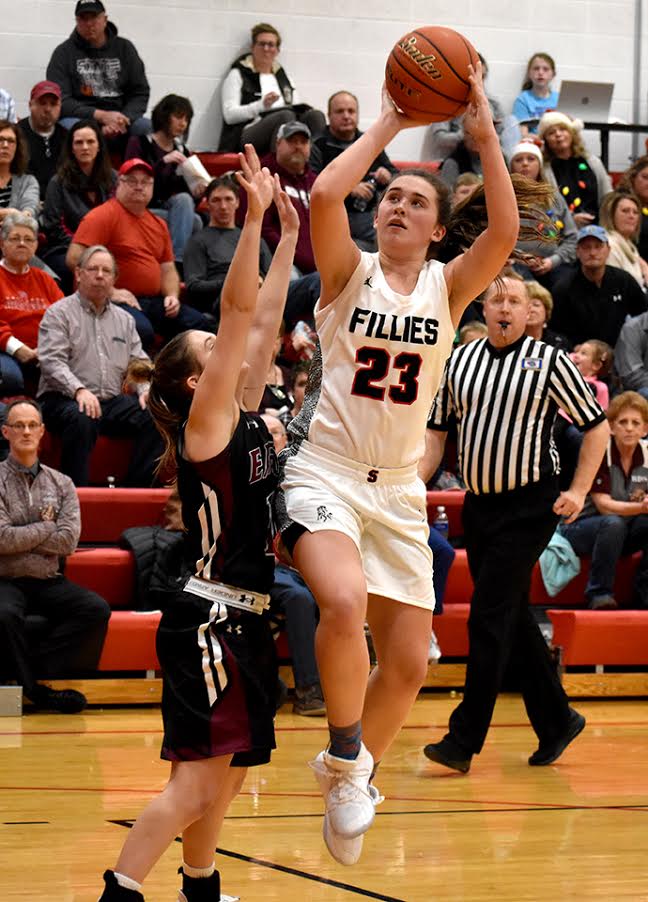 The Fillies outside the game was too much for Cross County to handle. Junior Kylie Baumert led the way with 14 points including going 8-10 from the free-throw line in the “W”. Xytlaly (Collie) Bautista lit up from outside for three 3-pointers in the game. She also had a field goal late in the game for a total of 11 points The Fillies had a total of 7 from downtown. The Cougars were led by junior Cortlyn Schaefer who doubled her game average knocking in 16 points in the game. Chloe Sandell added ten in the loss.

At the end of the first Sutton led 12 to 9. They broke it open in the second quarter leading 27-14 at the half.  Cross County mounted a come-back in the third outscoring Sutton 13-5. But Sutton wasn’t about to roll over batting back for 14 points in the fourth quarter compared to Cross County’s ten, beating the Cougars 47-36.

In the boys game, Sutton dominated most of the game-winning the  game 68-50. The Mustangs were led by senior Jacob Haight who poured in 19. Haight was 7-9 from the line and tossed one in from downtown. Colton Haight poured in 11 points off the bench including a 3-pointer of his own.

Cross County was led by Cory Hollinger who lit up for 27 in the losing effort. He was 11-13 from the free-throw line.

At the end of the first quarter, the Cougars trailed only 15-11. They actually tied up the score in the second quarter 19 all before Sutton regained the lead and never looked back from there.

The Mustangs defense proved to be too much for the Cougars to handle, as Cross County only scored 13 the entire second half compared to Sutton’s 32 points. The second half Mustang surge was in large part to  Quenton Jones who knocked in 12 of his 15 points after the break.