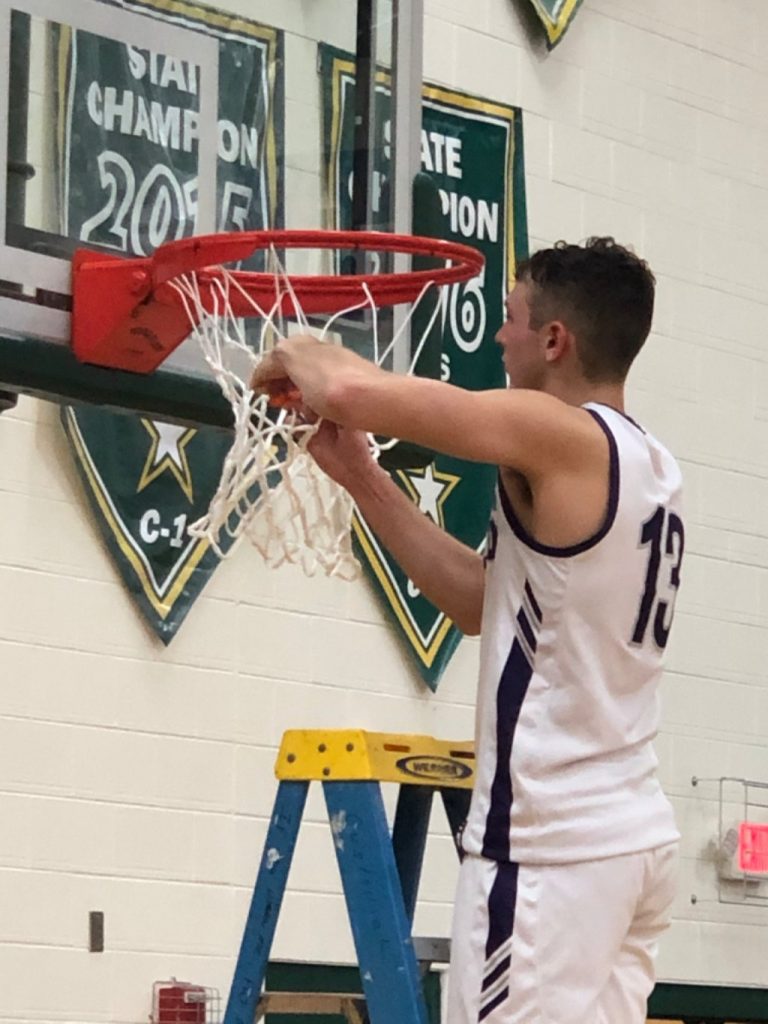 Southern Valley never trailed at Kearney Catholic High School on Tuesday evening, as they punch their ticket into the state tournament defeating the Heartland Huskies in the D1-6 District Final 63-50.  Click here for the podcast.

Both teams came into the contest with hopes of reaching the state tournament next week. The Eagles started fast, quickly gaining a 6-0 lead early in the first moments of the contest. Carter Bose attacked the basket early, setting up open looks outside later in the quarter. After a timeout from Huskies head coach Erik Wetjen, Heartland responded with a defensive stop and a transition bucket, but Eagles sharpshooter Jaden Quinn found his rhythm shooting 3-4 from beyond the arc in the first quarter, ending the first quarter with nine points. Heartland sophomore Trajan Arbuck heaved a prayer to the rafters at the buzzer and his shot connected, ending the first quarter 19-9 with the Eagles in the lead.

Southern Valley them employed their aggressive defense once again, only giving up 44 points per contest, and attacked passing lanes in the opening minutes of the second quarter. As the score began to creep out of reach for Heartland, the Huskies saw huge swings in momentum after a three pointer from freshman Trev Peters and a dribble drive from Jared Nunnenkamp. Heartland put 11 points on in the second quarter, but still trailed the Eagles 28-20.

Once play resumed after halftime, the Eagles exploded in a huge third quarter scoring run from Clayton Berry, adding 10 points.  As the Huskies began to climb their way back into the contest, an  offensive board and tie-up in the lane ended in a technical foul against Nunnenkamp, giving Southern Valley senior Beau Baily two chances from the free-throw line. Baily connected on both, then Southern Valley saw a score on the following possession. The Eagles  lead ballooned to 17 at the end of the third, holding Heartland to only 10 points in the quarter.

The fourth quarter maintained the same intensity, as Heartland put up a frantic effort to accumulate points. The Huskies’ Arbuck added 14 points in the final stanza, finding his rhythm at the top of the quarter with a three pointer. Southern Valley continued to outpace Heartland, adding 16 in the final quarter with key free throws as the Huskies were forced to foul. Brody Yant hit 4/5 in the final quarter, and Berry concluded his impressive evening with an additional 6 points as he regularly beat the press from Heartland. After unloading the benches for both sides, Heartland saw their last possession come up  empty handed, as Southern Valley won 63-50.

Heartland ends their season with a 15-8 record, an impressive feat for a young roster after losing a key starter in the first game of the season. The Huskies’ saw contributions from Arbuck (22 points), Peters (11), Nunnenkamp (10), Jake Regier (3), Kale Wetjen (2), and Morgan Maltsberger (2).