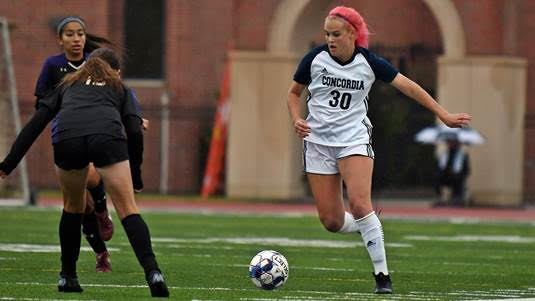 OMAHA, Neb. – For the second game in a row, the Concordia University Women’s Soccer team needed just over 90 minutes in order to secure a win. Junior Cheyenne Smith emerged from a scrum and produced the golden goal, setting off another victory celebration. This particular one occurred on Wednesday (Oct. 14) afternoon at Heritage Park in Omaha, Neb., home to the College of Saint Mary. The Bulldogs topped the Flames, 1-0, in overtime.

“I thought we were the most creative we’ve been all year as far as looking for combinations, especially in the second half,” Goines said. “We started growing into the game a bit and breaking down their back line. We were persistent and stayed with it across the board. It was a more confident performance and we showed we could take control of the game.”

The effectiveness of the Bulldogs in the final third remains a work-in-progress, but they are finding ways to win in the GPAC. The team’s ninth shot on goal finally found the back of the net on Wednesday. Madeline Haugen serviced the corner kick into the box. Smith then proceeded to slot the ball across the goal line immediately following a touch played by Mikeila Martinez.

It was a good way to put behind the frustrations on the attack over the first 93 minutes of action. Concordia outshot College of Saint Mary, 18-9, and delivered nine shots on frame. Sophomore Jaiden Beecher was particularly active having accumulated four shots, including three on goal. On the other end, goalkeeper Lindsey Carley made two saves in the process of notching the 20th shutout of her career.

Goines gave credit to College of Saint Mary (1-3-1, 1-3-1 GPAC) keeper Gabby Felker for her role in a scoreless first 90-plus minutes. Felker made eight saves and only in a scramble situation were the Bulldogs able to unearth the game winner. Wind also played a factor. Concordia had a more favorable wind in its favor in the second half.

Said Goines, “We played a good game overall. There was about a 20 mile-per-hour wind that was going goal to goal. It made everything a little more challenging when the wind was in your face. College of Saint Mary pressed us pretty well with the wind at their back. We had three or four chances to put one away in the first half, but it was a challenge. We withstood that and we were able to take control in the second half.”

Smith, who hails from Alpine, Calif., also scored the lone goal in the 1-0 win at Dordt on Sept. 23. Five of the first eight Bulldog games have been decided by a one-goal margin and three have gone to overtime. As for Carley, only Chrissy Lind (28 career shutouts) ranks above her on the program’s all-time shutouts list.

The Bulldogs will celebrate senior day on Saturday when rival Hastings (4-1, 2-1 GPAC) makes its way to town. Kickoff is set for 1 p.m. CT from Bulldog Stadium. The two programs went head-to-head in the 2014, 2017 and 2018 GPAC tournament championship games. In terms of accolades, Tori Cera and Michaela Twito are standouts among the seniors, who have helped Concordia to a combined 39 wins since the start of the 2017 season.