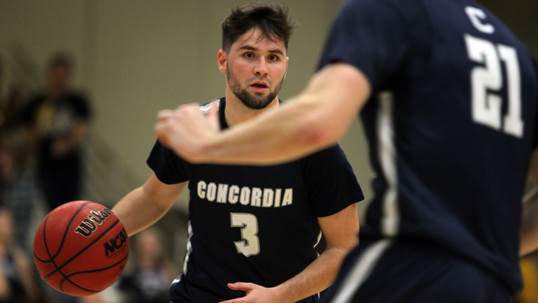 Head coach Ben Limback’s squad has put together an overall record of 24-9 this season and now awaits its national tournament draw. The Bulldogs are headed to the national stage for the first time since 2005.

Sloup has been the program’s top offensive playmaker of the past two seasons. This winter, the Seward High School product has averaged 16.0 points per game while shooting 43.1 percent from the field, 39.9 percent from 3-point range and 76.5 percent from the foul line. Sloup has notched 20 or more points nine times this season with a high of 29 in the senior day victory over Mount Marty. In 115 career games as a Bulldog, Sloup has totaled 1,238 points, 297 rebounds and 248 assists. His point total places him at No. 18 on the program’s all-time list. Sloup was a second team All-GPAC honoree as a junior in 2018-19.

Kent’s game has taken a step forward in 2019-20 following a GPAC Freshman of the Year campaign last winter. The Crete, Neb., native bumped up from honorable mention all-conference status a year ago. Currently, Kent is averaging 12.6 points, 3.7 rebounds, 2.2 assists and 0.9 steals per game while shooting 40.0 percent from the field, 36.9 percent from 3-point range and 70.4 percent from the free throw line. In his first 64 games at Concordia, Kent has amassed 739 points. His 28 points in the win over Midland on Nov. 12, 2019, stand as a career high.

Shuck has been a steadying presence and an iron man while playing in each of the program’s 125 games since the start of the 2016-17 season. He is now a three-time honorable mention All-GPAC recipient. Shuck has been red hot in the second half of this season and is averaging 13.2 points, 4.8 rebounds, 1.8 assists and 1.0 steal per game while shooting 45.7 percent from the floor, 35.9 percent from 3-point range and 81.7 percent from the charity stripe. The Grand Island, Neb., native ranks eighth in school history with 1,558 career points. Recently, Shuck also was honored as an Academic All-District selection (CoSIDA) and as the MVP of the Concordia Invitational Tournament.

Wiersema is another rising star in the program. He totaled 42 points over the three GPAC tournament wins while helping raise his season scoring average to 10.6. The 6-foot-3 native of Loveland, Colo., is also averaging 4.1 rebounds, 2.8 assists and 1.4 steals per game while shooting 53.5 percent from the field, 36.0 percent from beyond the arc and 70.8 percent from the free throw line. Wiersema’s 22 points in the GPAC quarterfinal win over Northwestern represent a career high.