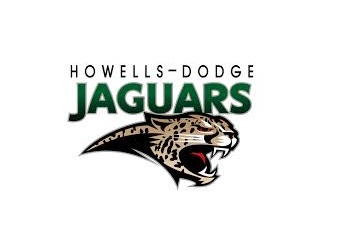 LINCOLN – Blake Sindelar and RJ Bayer combined for 53 points and Howells-Dodge beat Walthill 68-49 in the first round of the boys Class D1 state basketball tournament at Southeast High School in Lincoln on Wednesday.

The game was close early, with the Jaguars holding a 15-14 advantage after the first quarter.

Howells-Dodge went off for 22 points in the second quarter, including 13 from Sindelar. Walthill got hot in the second also, as they Bluejays connected on five three-pointers,

Howells-Dodge outscored Walthill 15-10 in the fourth quarter, including making 11 free throws, and the Jaguars were able to secure the 68-49 win.

Sindelar led Howells-Dodge with 28 points, and Bayer was right behind him with 25.

Kaden Sheridan had 24 points for Walthill, including four three-pointers.

Howells-Dodge is now 19-8 and advances to play Burwell in the D1 Semifinals Thursday afternoon at 1:30 at Pinnacle Bank Arena.