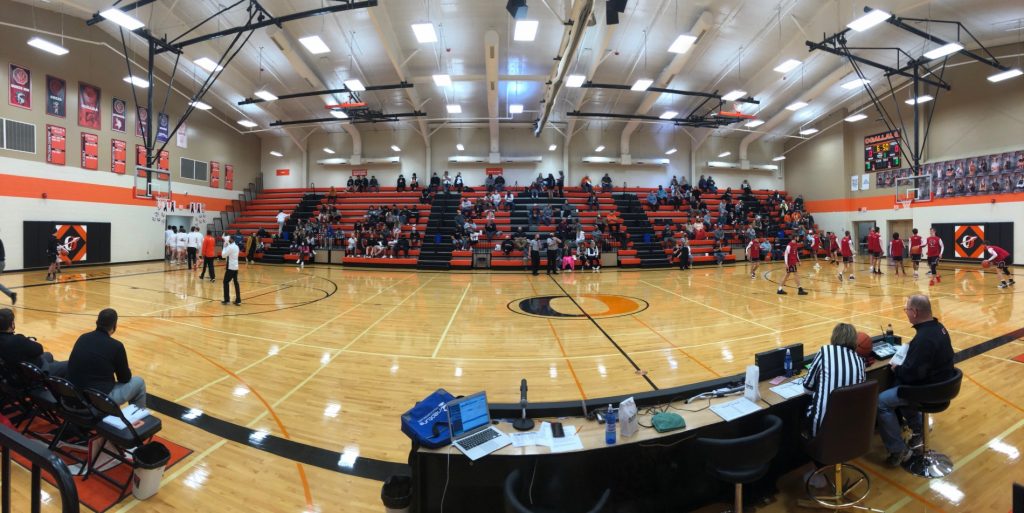 It was a doubleheader sweep for the Scottsbluff girls and boys basketball teams on the road at Ogallala on Tuesday night. One was a blowout and the other was a come from behind thriller that went to overtime.

That late game was the thriller with the Scottsbluff boys rallying in the fourth quarter and eventually getting an overtime win over Indians by the final of 64-56.

After scoring the first basket of the game it was Scottsbluff falling behind and never leading again until the closing moments of regulation.

After scoring six first quarter points the Cats put up double digits in the next three quarters to stay close while their zone defense also helped keep them within striking distance. After giving up 30 points in the first half the Bearcats clamped down, allowing just 22 in the second half.

Scottsbluff was able to go in front late but then a foul sent Ogallala’s Dayo Kennedy to the line with 6.6 seconds to play in the game where he missed the first and hit the second to tie it up. Tyler Harre’s three point hoist at the buzzer from the left wing looked dead on but came up a miss to send this one to the extra session.

In overtime the Bearcats won the tip and Harre promptly hit his first three of the night and the Cats never looked back. They hit 9 of 11 free throws in OT and were able to lock up the Indians on defense.

Kadyn Mahrenke, who came in averaging a team high 15 ppg for Ogallala, was held to just 8 on the night. The 2-3 zone was effective in limiting his touches.

This one was over in the first few minutes of the game. Scottsbluff came out firing on all cylinders from behind the three point line and they cruised to a 64-35 win.

The Lady Cats led at the end of the first quarter 22-12 on the strength of six made three’s coming from five different players. On the night Scottsbluff hit a total of 11 three point shots.

Twelve different players scored in the game with three in double figures. Payton Burda led the way with 14 points and then Mariyah Avila finished with 12 and Sabrina Harsh tallied 11 on the night.

It wasn’t just behind the arc where they found success as Scottsbluff hit 9-12 at the foul line in the first half and finished 11-18 at the line.

State ranked at #7 in the latest OWH Class B Poll, Scottsbluff is now 12-2 this season.

Scottsbluff will hold a girls/boys doubleheader at home on Friday night against Cheyenne East before both teams head to Cheyenne Central on Saturday.

Girls- Bayard 51, Morrill 49…Lexi Fiscus led the Tigers in scoring with 12 and Morrill got 34 points from Iycia Guerue…..In the boys game a ten point win for the Tigers, it was 57-47.

-The Bridgeport boys bounced back from their first loss of the season at Hershey last weekend to beat Leyton 74-25. The Bulldogs put five in double figures led by 16 apiece from Braeden Stull and Luis Garza…..In the girls game it was all Bridgeport by the final of 75-15.

-After their huge win over Scottsbluff last Friday followed by a loss at Chadron on Saturday the Mitchell boys team got a home win over Sidney on Tuesday night 72-64…..the girls game went to Sidney 52-34.

-Chadron swept their doubleheader with Hemingford.

-Gering will play at home twice this weekend with doubleheaders against Gordon-Rushville and Campbell County (Gillette WY).