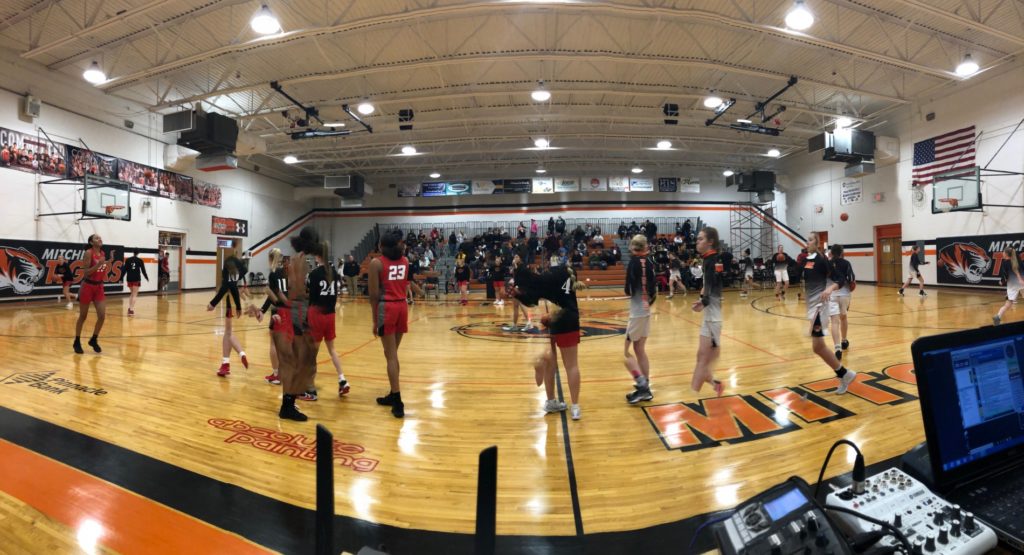 There were four high school basketball games on the Rural Radio Network last night with stops at Mitchell and Sidney High Schools.

Let’s start with the quicker trip of the night as the Scottsbluff girls and boys easily swept their doubleheader with wins over at Mitchell.

In the boys game the Bearcats used a 25-6 second quarter to run away and hide in their 77-50 win over the Tigers as they improved to 11-1 on the season. It was a nice bounce back effort after their loss to Hastings last Saturday.

“Number one, I wanted them to come out with the intensity and I thought they came out with a ton of intensity and were ready to play tonight. Getting baskets and finding guys and defending. Defended like crazy I thought”, Head Coach Scott Gullion said.

It was a milestone night for senior point guard Jasiya DeOllos, who needed 13 points to reach 1,000 for his high school career. DeOllos got that and then some, finishing with 23 on the night. Earlier this season he became the school’s all-time assists leader and he finished with six of those last night also.

Mitchell was led in scoring by senior Blake Thyne, who had 18 points. Austin Thyne, Mitchell’s leading scorer on the season, was held in check to just 4 points.

In the girls game it was Scottsbluff winning comfortably by the final of 60-44.

The Tigers led at the end of the first quarter, 11-9, but then in the second stanza it was all Scottsbluff as they outscored Mitchell 21-7. Freshman Payton Burda sparked the scoring with three made three’s in the quarter on her way to a team high 15 points.

Yara Garcia, despite foul trouble throughout the night, finished with 13 points. Emma Foote, who’s reccently been inserted into the starting lineup, scored 7 points (avg’s 2) and looked like she’s starting to come into her own a little bit on the offensive end of the floor.

Head Coach Dave Bollish pretty pleased as his team improved to 8-5, “We executed what we worked on. I thought we had success with it and by taking care of the defensive glass that opened up some of our offensive transition. That was nice to actually be able to get out and run. I was really proud of the way our girls handled things out there on the court.”

Mitchell looks like a team that can certainly make some noise in C-1 in the area moving forward this season, and the Tigers were led in scoring by sophomore Marjie Schmitt, who scored 10 of her team high 12 points in the fourth quarter.

Quincey Johnson scored 9 points and also did a nice job on the glass, rebounding aggressively throughout the night.

Both Mitchell teams are home to play Chadron tonight while the Scottsbluff teams are off until Tuesday when they travel for games at Cheyenne South.

In a matchup of two teams in desperate need of a win it was the Gering boys rolling past the Red Raiders 70-37.

The Bulldogs got a big night from senior Kolton Ebbers, who finished with team high 17 points. Junior guard Brett Pszanka also was in double figures with 12 points as the Bulldogs got their third win of the season.

It was a much needed, feel good win for Gering after a tough 0-3 weekend in Columbus at the GNAC Tournament last week according to Head Coach Kyle Cotton, “Oh it was a great feeling for us. This was probably the first game we came out and executed our gameplan to a T. We came out and wanted to be aggressive immediately and we set the tone early by getting the ball inside. We got up 9-0 and never looked back from there.”

In the girls matchup it was a 67-49 win for Sidney as the Lady Bulldogs dropped their 9th straight game.

Both Gering teams are home today to take on Newcastle WY. We’ll have coverage on TV and radio.