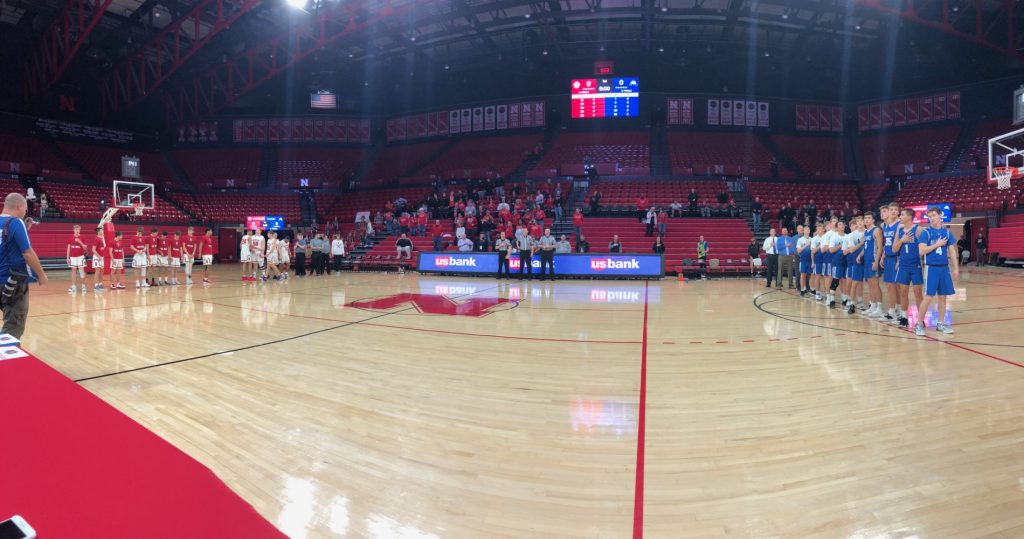 In front of only immediate family members on Thursday night at the Bob Devaney Sports Center the Scottsbluff boys basketball team earned a 53-38 win over rival Alliance in a first round Class B State Tournament game.

With the win Scottsbluff will play this afternoon in the state semifinals against Omaha Roncalli.

In the win over Alliance it was a slow start for the Bearcats and a fast start for Alliance. Really a role reversal from their matchups over the last few seasons. The end, though, turned out to be more of the same with Scottsbluff having now won 31 of the last 32 games against their rival.

Scottsbluff started to chip away a bit in the second quarter, outscoring the Bulldogs 10-4. Dawson Mohr had five points in the quarter for Scottsbluff.

The Bulldogs scored the first basket of the second half but then a lightning quick 6-0 spurt for Scottsbluff got them their first lead of the night and they would never trail again.

Jasiya DeOllos, who came in averaging 20 points a game, got seven points in the third and the Cats scored 16 points in the quarter to lead 31-27 heading into the fourth quarter.

Foul trouble was a major issue for Alliance in this one with Joel Baker and Brayden Palmer having to spend time precious time on the bench in key moments.

Baker, Alliance’s leading scorer at 17.5 per game, was held to just nine on the night and he only scored three in the first three quarters.

Chance Parker had a huge game for Scottsbluff. Parker finished with 14 points, plenty of rebounds (his offensive rebounds were huge), blocked shots, and he altered shots as well when Alliance drove to the basket.

Scottsbluff dominated the fourth quarter 22-11 on the scoreboard. Parker scored 6  in the quarter, Mohr finished with 8, including a couple of big late triples, and DeOllos scored four down the stretch.

Mohr led Scottsbluff with 15, Parker had the 14 point night and DeOllos hit double figures also with 12.

Scottsbluff will get a familiar foe, in a way, in today’s semfinal as they take on the Omaha Roncalli Crimson Pride.

Roncalli defeated Hastings in overtime by the score of 60-58.

Superstar guard Jack Dotzler and senior back court running mate, Taiden Red, each scored 20 points in the win for the Crimson Pride.

Scottsbluff and Roncalli have history on the gridiron. In each of the last two seasons Scottsbluff has picked up dramatic playoff wins over Roncalli. This year’s game was in the semfinals and sent Scottsbluff to the title game in Lincoln.

Both teams are already in Lincoln but today’s outcome will send one of them to tomorrow’s title game to play either Omaha Skutt or Mt. Michael.

You can listen today’s Scottsbluff vs. Roncalli game on 106.9 The Trail and KHYYfm.com starting at 2:30 pm MT with tip-off scheduled for 2:45.