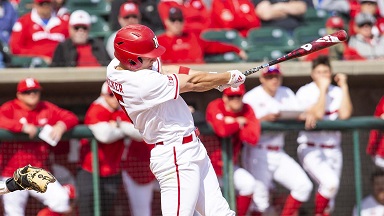 Lincoln – Right-hander Shay Schanaman fanned a career-high 11 over six-plus innings, as Nebraska remained in first in the Big Ten race with a 14-3 victory over Maryland Sunday afternoon.

Schanaman (3-0) allowed one hit over the first six innings – a solo homer by Chris Alleyne in the third – and set down 10 straight from the third through sixth innings for the Huskers, who improved to 15-6 on the season.

The right-hander was helped by a Husker attack which pointed out 14 hits and used a pair of big innings to take their fourth straight weekend series. NU put up five runs in the second off Terrapin starter Jason Savacool (4-1) and put the game out of reach with a seven-spot in the eighth after Maryland pulled to within 7-3.

Nebraska struck early against Savacool, chasing the Maryland starter with six straight hits in the second, as the Huskers sent 10 men to the plate with most of the damage coming from the bottom third of the lineup. With one out and a run home on Luke Roskam’s RBI single, Matthews doubled home NU’s second run before Everitt crushed a two-run double to right center which nearly cleared the fence. Acker capped the five-run with an RBI single, as he had three hits, two RBI and scored three times.

That was more than enough for Schanaman, who took a one-hitter into the seventh before Maryland (10-12) took advantage of some wildness from the Husker starter. After a leadoff infield single, the Husker right-handed hit the next three hitters to push across a run. Jake Bunz came out of the pen and got out of the jam, as the Terrapins pushed across another run with a fielder’s choice from Tucker Flint, but could not pull closer than 7-3.

Bunz gave the Huskers a strong outing in relief, fanning four in two shutout frames, as Husker pitching combined for a season-high 16 strikeouts in the win.

Nebraska put the game out of reach in the eighth against the Maryland bullpen, putting up seven runs on just three hits. Spencer Schellenbach had an RBI triple to get the rally going before Matthews capped a 2-for-5 afternoon with a grand slam to left for his third homer of the year.

Matthews drove in five runs and scored three times, while Hallmark had a pair of hits and stole three bases on the afternoon.

The Huskers will now embark on a six-game road trip beginning Friday with a matchup at Penn State. First pitch is set for 5 p.m. (central) and will be carried on the Learfield IMG College Husker Sports Network.