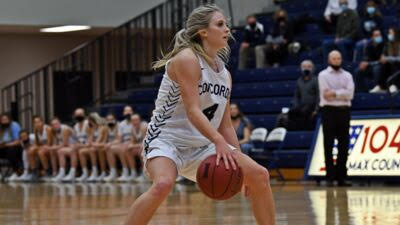 SEWARD, Neb. – A matchup between teams tied for second place in the GPAC standings turned into just the type of physical, wire-to-wire battle that one would have expected. The Concordia University Women’s Basketball team rode an offensive outburst from freshman Taysha Rushton and a tenacious defensive effort to a 65-59 win over Briar Cliff on Saturday (Jan. 23). Rushton nailed five of her side’s 11 treys in a victorious effort.

Head Coach Drew Olson’s squad is unlikely to repeat as GPAC regular-season champions, but it has positioned itself alone in second place for the moment. The Bulldogs moved to 13-7 overall and to 12-5 inside the GPAC.

“That was a good win in an extremely physical game,” Olson said. “I am really proud of our defensive focus. I thought we got rushed a bit. We need to do a better job of taking care of the ball and finishing games, but we showed our toughness throughout. Taysha was awesome and a big reason we got our lead.”

The production of Rushton and a couple of clutch fourth quarter treys from Mackenzie Koepke were key in Concordia building a double-digit lead with under a minute to go. Olson also cited the play of Abby Aplaca, Rylee Pauli, Sadie Powell and Mackenzie Toomey as critical factors. That’s not to say the Bulldogs could ever get comfortable. They struggled at times handling the press of the Chargers and committed 22 turnovers.

This one required a high degree of toughness and grit – and Concordia won’t lose too often when it shoots better than 40 percent (42.9 on Saturday) from the floor. A variety of Bulldogs had a hand in limiting Briar Cliff star Konnor Sudmann to 3-for-13 shooting from the field. Pauli scrapped for four steals while the transfer Aplaca (five points) made her CUNE debut and supplied a lengthy defensive presence on the perimeter.

Rushton ensured that the Bulldogs started this contest better than the one they lost at Briar Cliff earlier this season. After totaling a combined nine points in the previous two games, Rushton drained four 3-point field goals in the first half alone. Her confidence has not wavered. Said Rushton, “It’s just about staying positive. Coach Olson talked about it at one point. Just think positive and don’t let negative thoughts come through. That’s what I did.”

Rushton likened the physicality of the battle to that of a football game. The Bulldogs could not put the ball between the uprights (8-for-42 from 3-point range) in the first meeting with Briar Cliff. This time around they went 11-for-28 from beyond the arc while the Chargers shot 4-for-26 from long range. Taylor Cockerill posted 15 points (9-for-14 from the foul line), eight rebounds and four assists in complimenting Rushton. Koepke contributed nine points and eight rebounds.

The Chargers (13-7, 11-6 GPAC) got exactly 12 points from Madelyn Deitchler, Kaegan Held and Payton Slaughter. Briar Cliff fell despite margins of plus-six in turnovers and plus-one (40-39) in rebounding. As part of a difficult recent schedule, the Chargers have dropped three of four with all three defeats coming on the road.

The stretch of six home games over the final seven outings continues on Thursday (Jan. 28) when the Bulldogs will host College of Saint Mary (2-13, 1-11 GPAC) at 7 p.m. CT. The two sides also met in Omaha just before Thanksgiving with the result being a 99-47 Concordia win. The Bulldogs are 13-0 against the Flames since CSM joined the GPAC prior to the start of the 2015-16 season.