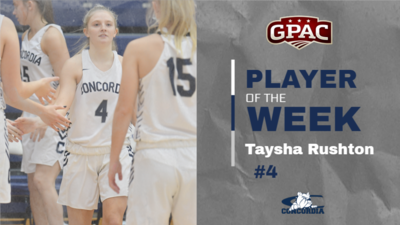 SEWARD, Neb. – A prolific week of scoring resulted in recognition for Taysha Rushton. The freshman from Lubbock, Texas, has been named the GPAC/Hauff Mid-America Sports Player of the Week, as announced by the conference on Tuesday (Jan. 5). Rushton led the Concordia University Women’s Basketball team to wins last week over Mount Marty and Northwestern.

Rushton has quickly adapted to the college game while taking over the starting point guard role. She equaled a career high with 23 points versus Mount Marty before surpassing that standard with 28 points at Northwestern. Over the two victories, Rushton produced a combined 51 points, six rebounds and five assists and went 11-for-19 from 3-point range and 10-for-12 from the foul line. Rushton reached double figures in scoring in the first quarter in both of last week’s outings.