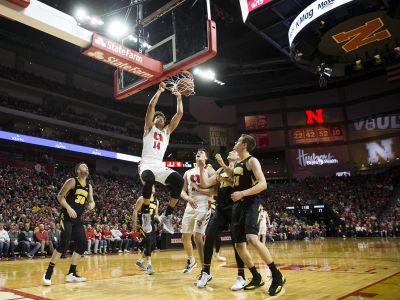 Lincoln – University of Nebraska forward Isaiah Roby announced Wednesday afternoon that he has decided to remain in the 2019 NBA Draft. Roby finished his three-year Husker career with 786 points, 530 rebounds and 154 blocked shots, a total which is sixth in school history. He will look to become the first Husker basketball player drafted since Venson Hamilton in 1999.

The 2019 NBA Draft is set for Thursday, June 20th at Barclays Center in Brooklyn, N.Y. Roby, a 6-foot-8, 228-pounder, enjoyed a breakout 2018-19 campaign as Nebraska made its second straight postseason appearance. He established career highs in scoring (11.8 ppg), rebounding (6.9 rpg), assists (1.9 apg) and steals (1.3 spg), while averaging 1.9 blocks per game. He made 35 starts last season and finished among the Big Ten leaders in blocked shots (third), steals (ninth) and rebounding (14th).

Roby was the only Big Ten player to rank in the top 10 in the conference in both blocked shots and steals. Roby tallied three double-doubles – all in Big Ten action – and had a career high 28 points in Nebraska’s first-round NIT win over Butler. It was one of five 20-point games during Roby’s junior campaign. His 66 blocked shots in 2018-19 tied for ninth in school history, and he joined Venson Hamilton (1997-98 and 1998-99), as the only Huskers to put together consecutive seasons of at least 50 blocked shots and 50 assists.

Roby moved into the starting lineup midway through the 2017-18 campaign, sparking the Huskers to a 10-2 Big Ten finish, as the Huskers set a school record with 13 conference wins. The Dixon, Ill., product averaged 8.7 points and a team-high 6.3 rebounds per game while ranking fourth in the Big Ten in blocked shots at 2.0 per game. He also shot 40 percent from 3-point range, including 52 percent in conference action. Roby had four double-doubles as a sophomore, including three in conference play.