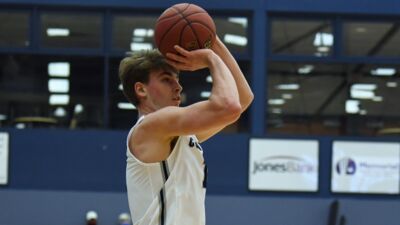 SIOUX CENTER, Iowa – In its first outing since Jan. 23, the Concordia University Men’s Basketball team shook off a sluggish start to make Wednesday (Feb. 3)’s clash at Dordt a nail-biter. Despite second half outbursts from Carter Kent and Gage Smith, the Bulldog rally fell short in a 75-69 loss in Sioux Center, Iowa. The 16-point deficit Concordia faced in the first half was whittled all the way down to one in the latter stages of the contest.

Head Coach Ben Limback’s squad made its final road trip of the regular season (5-5 in GPAC road games) and has slipped to 14-8 overall and to 11-6 in conference play.

“The first half looked out of sorts,” Limback said. “We looked like a team that had 10 days off. I felt like we were ready to play, but it certainly didn’t look like it. Offensively we weren’t sharp and turnovers led to some of their transition points. At halftime we really challenged them to be tougher. That second half we definitely got into a rhythm and played better.”

Had the Bulldogs pulled this one out of the fire, it would have been quite the memorable comeback following the rough start. Kent even had a quality step-back look at a potential go-ahead three in the final 30 seconds that would not go down. Concordia then turned it over on its next possession, clinching the win for the Defenders (16-7, 11-7 GPAC), who are 8-2 at home this season.

Smith’s energy in the second half became infectious. He finished with 19 points, 12 rebounds and three assists. The shooting stroke of Kent (4-for-6 from 3-point range) also helped bring the Bulldogs back. A 12-4 run to open the second half got Concordia within five (43-38) in a tight contest the rest of the way. One of the more crucial sequences came immediately after Sam Scarpelli’s trey made it a one-point game (63-62) with just over five minutes to play. Dordt responded with baskets on its next two possessions to push its lead to five.

Garrett Franken (team high 18 points) and company always had a response. The Defenders did some of the little things right (like turn it over just six times) in order to hold onto their lead. They also outshot Concordia, 48.4 to 45.5 percent. The victory allowed Dordt to avenge the 82-59 blowout loss it suffered in Seward earlier this season.

“They’ve been really good at home,” Limback said. “To have a shot to win the game at the end is what you play for, but it’s still disappointing. We played a very poor first half. We’ll bounce back. We could be in a position like this on the road in the conference tournament so we’re going to have to be better than we were tonight. I loved our fight in the second half.”

Wiersema kept alive his streak of consecutive games in double figures (24 in a row) by contributing 10 points and six assists. Scarpelli added nine points while Ryan Holt notched six points and six rebounds. On the other side, Bryce Coppock (14) and Jesse Jansma (11) also reached double figures.

The Bulldogs will now get comfortable at home while closing out the regular season. No. 16 Dakota Wesleyan (16-5, 12-4 GPAC) will visit Friedrich Arena for a 6 p.m. CT tipoff on Saturday. In this season’s matchup at the Corn Palace, the Tigers held Concordia to 35.5 percent shooting and won, 70-64. DWU has won the last seven regular-season meetings, although the Bulldogs got the upper hand in last year’s GPAC tournament championship game.