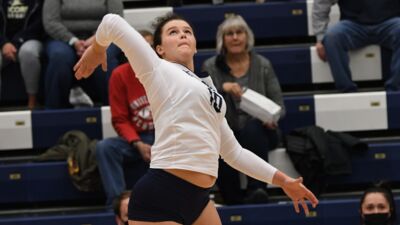 SEWARD, Neb. – The results sure didn’t indicate signs of rust during an opening set that saw the 10th-ranked Concordia University Volleyball team build a 12-3 lead. No. 24 Ottawa University (Kan.) responded and made it a competitive match, but couldn’t overcome a big night from Bulldog sophomore Camryn Opfer. Concordia defeated the Braves, 25-14, 25-17, 22-15, 25-22, inside Friedrich Arena on Wednesday (March 17).

Head Coach Ben Boldt’s squad played in its first official match since Oct. 29 while hosting Ottawa. The Bulldogs (13-3) completed their entire GPAC regular season during the fall, but did not go up against a nonconference foe until a unique St. Patrick’s Day outing on Wednesday.

“We got it going when we needed to,” Boldt said. “I think you saw what we are working for in that last set as far as being fearless and taking big swings in those big moments. That’s more of the conversation and the training that we’re having with our team right now. It was fun to get back out there.”

The Seward High School product Opfer had plenty of fun of her own in a career 21-kill performance. She hit .405 while dropping bombs from the outside and also coming up with 12 digs. The play of Opfer helped affirmatively answer any questions about how Concordia might look in the beginning to part II of a very unusual 2020-21 season.

The Bulldogs outhit the Braves for the night, .205 to .140. In an especially positive sign, Concordia blitzed Ottawa early in the first (12-3 lead) and second (7-0 lead) sets. Boldt’s crew continues to be one with impressive focus, even after a long layoff.

“Coach said before the match that we hadn’t played in about four or five months,” Opfer said. “It’s different, but we have to stay in the present, communicate on the floor and play like we have together all year. That’s what we did.”

Senior standouts like Tara Callahan, Marissa Hoerman and Kara Stark aspire to see this thing out as long as they can. Stark added 16 kills on Wednesday and put a cap on the evening by hammering match points to the floor boards. The quarterback of the operation, Callahan amassed 45 assists and assisted on three blocks. In the back row, Hoerman did fine work in notching 28 digs.

Ottawa (23-7) has packed in a whopping 17 matches since the calendar flipped to 2021. The Braves refused to go down quietly after dropping the first two sets. Ryleigh Burdick (12 kills on 28 attacks) had the most success from an offensive perspective. Burdick and company came close to forcing a fifth set. They closed within 22-21 in the fourth set before Concordia’s strong finishing blow.

“I thought we took good swings,” Boldt said. “Our kill numbers from each set were really good. The third set we kind of let off the gas pedal a little bit. The fourth set I was happy with our mentality through the end and our ability to take big swings.”

Erin Johnson and Tristin Mason contributed to the win with 12 digs apiece. Arleigh Costello chipped in with nine kills and Kalee Wiltfong led the way at the net by getting in on four of the team’s seven blocks. Also noteworthy, Midland transfer Bree Burtwistle made her first appearance as a Bulldog while subbing in at setter.

Concordia will spend this spring trying to show it belongs ranked in the NAIA top 10. Said Opfer, “We’re going to play like we’re No. 10 and we’re going to stay in the present.”

Next up on the slate is a nonconference clash with 11th-ranked Grand View University in Des Moines, Iowa, on Saturday, March 27. First serve is set for 4:30 p.m. CT.