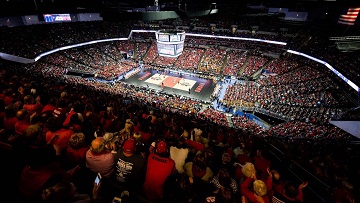 Omaha has served as the most frequent host of the NCAA Division I Women’s Volleyball championship in the 39-year history of the tournament. Omaha previously hosting the event in 2006, 2008 and 2015. Omaha was scheduled to host the 2020 NCAA Championship this December, but that event was postponed until April 23-25, 2021, due to the global pandemic. The NCAA has not yet officially announced if Omaha will remain as the host site for the volleyball championship this spring.

The NCAA Division I Women’s Volleyball Championship has been a smashing success when held in Omaha. The 2006, 2008 and 2015 championship matches all set records for the largest single-match attendance in NCAA women’s volleyball history. Overall, five of the 10 largest crowds in NCAA history have been either NCAA Semifinal or Finals matches played in Omaha.

Nebraska has reached the NCAA Semifinals every time the event has been held in Omaha. The Huskers won the national title in 2006 and 2015, and in 2008 the Huskers lost a five-set thriller to Penn State in the semifinals, handing the Nittany Lions their only two set losses of the season.

“This is awesome news for Omaha, the state of Nebraska and volleyball fans across the country,” Cook said. “Omaha has served as a fantastic host in the past, and the way they’ve embraced this championship is unmatched by any other city in America.

“The atmosphere and support in Omaha is what every college volleyball player deserves when they are pursuing a national championship. There are always huge crowds when Omaha hosts, and I have no doubt tickets will sell out fast. This will be a great experience for players, coaches and fans, and the University of Nebraska is excited to be a part of it.”

In addition to announcing Omaha as the host of the 2022 NCAA Division I Women’s Volleyball Championship, the NCAA announced that the 2023 event will be held in Tampa, Florida, the 2024 Championships in Louisville, Kentucky, and the 2025 tournament in Kansas City, Missouri, where Nebraska won its most recent national championship in 2017.