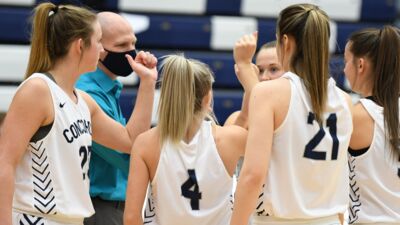 SIOUX CENTER, Iowa – It took the hustle and grit of Rylee Pauli and the reptilian-like cold blood of Taylor Cockerill to get it done on the road once again. The 25th-ranked Concordia University Women’s Basketball team led most of the way and responded to Dordt’s second half push in the process of claiming a 77-71 win in Sioux Center, Iowa, on Wednesday (Feb. 3). National championship winning coach Drew Olson hit a milestone with the 400th win of his career.

Olson’s squad has completed the road portion of the GPAC regular-season slate (8-3 in GPAC road games) and has moved to 15-7 overall and to 14-5 inside conference play.

The Bulldogs came out hot offensively (52.4 percent shooting in the first quarter), but the story of this contest was more about tenacity on the boards. Up against one of the nation’s top rebounding teams, Concordia beat the Defenders at their own game. Pauli bruised her way to eight of the team’s 22 offensive rebounds. Pauli finished with 13 points and a career high 14 rebounds.

Cockerill posted 15 of her game high 26 points in the second half. The Waverly High School product delivered the dagger with a top-of-the-key three in the final two minutes. That shot pushed the lead from five to eight (75-67). As part of her ultra-aggressive night, Cockerill tallied 10 points in the fourth quarter. There were also big triples nailed at the end of both the first and third quarters by Mackenzie Toomey.

The Bulldogs managed to counter the size of Dordt (12-10, 11-8 GPAC), which starts four players who stand 5-foot-10 or taller. University of Nebraska transfer Ashtyn Veerbeek is a handful. She piled up 19 points and 19 rebounds while four-year standout Erika Feenstra added 15 points. Going off script, the Defenders were outrebounded, 49-44.

Olson even turned on the press in the early going while throwing different looks at Dordt. Concordia forced only 11 turnovers, but it still owned a positive margin because it took care of the ball (eight turnovers). The backcourt of Cockerill, Bailey Conrad and Taysha Rushton combined to commit only two turnovers. Rushton chipped in with nine points while Toomey added eight. Taylor Farrell and Sadie Powell contributed six points apiece off the bench.

“It speaks to the focus we had coming in on the challenge in front of us and rising to it,” Olson said. “Rylee Pauli was phenomenal. There were some individual rebounds throughout the game where it was like, ‘wow, that was a big-time rebound.’ We played tough and physical today … We couldn’t stop Veerbeek in the third quarter so we switched to zone and that kind of slowed them down. We were able to get enough stops. It was more of a gutty win as opposed to a clean basketball game.”

Cockerill and company led by as many as 11 points during the first half. Dordt rallied to lead by five (62-57) in the third quarter before the Bulldogs ended the period with a surge that became a 10-0 run that spilled into the fourth quarter. Concordia never did relinquish the lead the rest of the way.

Considering all that he lost in last year’s senior class, Olson has done a masterful job in keeping the Bulldogs near the top of the GPAC. Olson’s 400 wins are the most by any coach in Concordia Women’s Basketball history. Only Grant Schmidt (445 wins as men’s coach) has won more as a Bulldog Basketball coach.

The Bulldogs will be at home for the remainder of the regular season. Concordia will welcome Dakota Wesleyan (13-7, 11-7 GPAC) to Friedrich Arena for a 4 p.m. CT tipoff on Saturday. In this season’s first meeting, the Tigers defeated the Bulldogs, 85-80, despite a 33-point outburst from Cockerill. Concordia has won nine of the past 11 meetings with DWU.