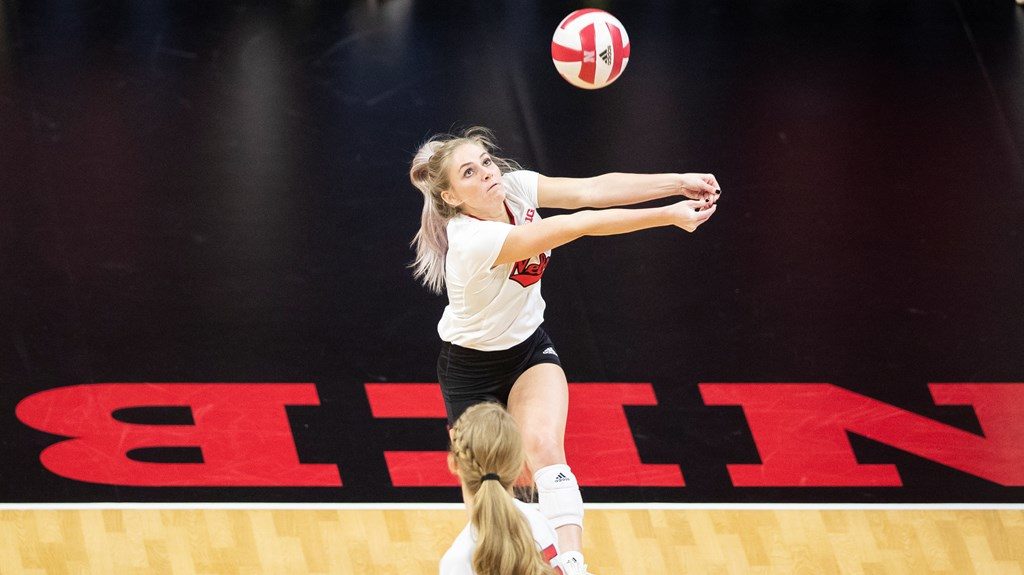 The Huskers (24-4, 16-3 Big Ten) hit a sharp .359 for the match and held Maryland to .167 hitting. Nebraska got seven or more kills from four different players, led by 10 kills from Lexi Sun, who also had nine digs, three blocks and two aces. Jazz Sweet also had 10 kills without an error for a .526 hitting percentage, and Madi Kubik added nine kills and four digs, hitting .375. Lauren Stivrins finished with seven kills on .583 hitting to go with a team-high four blocks. Callie Schwarzenbach terminated four kills.

The Huskers wrap up the regular season on Saturday night at 7 p.m. against Ohio State at the Devaney Center. The match will be televised on NET, streamed on BTN+ and can be heard on the Husker Sports Network.

Set 1: The Huskers broke free momentarily from a 10-10 tie with kill by Sun and a Maryland attacking error to make it 12-10. The teams combined for nine service errors before the media timeout, during which Nebraska held a 15-14 lead. A back-row kill by Kubik and a solo block by Sun put the Huskers up 19-16. Back-to-back ace serves by Sun increased NU’s lead to four, 22-18. Stivrins earned set point for the Huskers with a kill from the left pin, and Nebraska won 25-20 on another kill by the All-America middle blocker.

Set 2: A pair of kills by Kubik and a block by the freshman along with Stivrins had the Huskers up 7-5. Stivrins tacked on another pair of kills and a block with Sun, and the Huskers built their lead to 11-6. Nicole Drewnick served an ace to make it a six-point lead at 13-7, and Sweet produced a kill and a block with Schwarzenbach for a 16-10 advantage. Kubik recorded a kill before Knuckles served an ace to make it 18-11, and two more kills by Stivrins and one each from Kubik and Sun helped the Huskers pull away for a 25-15 win.

Set 3: Nebraska went up 9-4 after Stivrins and Hames posted NU’s sixth block of the match. The Terrapins then went on a 4-0 run to cut it to 9-8, but kills by Sun and Hames kept the lead for the Huskers at 11-9. Back-to-back kills by Sweet increased the lead to 13-10, and a sprawling dig by Miller led to Kubik’s eighth kill before an ace by Miller made it 19-13 Huskers. Nebraska finished off the sweep, 25-18.