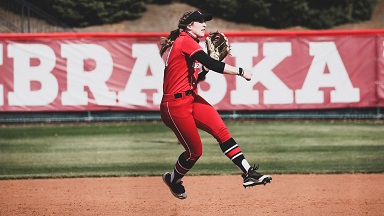 The win prevented a four-game sweep for Nebraska, which won the first three games of the series. The Huskers fell to 9-7 with the loss, while Penn State (1-15) picked up its first victory of the season.

Penn State scored four runs in the top of the first inning. Nebraska chipped away at the lead, pulling to within one with a two-run fifth inning and tying the game with a single run in the sixth. But with the score tied, the Huskers had a runner thrown out at home in the sixth inning before stranding a pair of runners. Nebraska then had the bases loaded with one out in the bottom of the seventh but was unable to score.

In the eighth, Penn State took advantage of its opportunity with a two-out, two-run single. Nebraska had the tying runners on base with one out in the bottom of the eighth but was unable to score.

The Huskers had 10 hits in the game but stranded 12 runners. Freshman Billie Andrews went 3-for-5 with the game-tying RBI single in the sixth inning. Freshman Sydney Gray was 2-for-3 with an RBI double before exiting the game with an injury. Junior Courtney Wallace also produced multiple hits, finishing 2-for-5 with a double and two RBIs.

In the circle, senior Olivia Ferrell (5-5) took the loss in relief, allowing two runs in 4.0 innings. Freshman Kaylin Kinney made her second career start but was unable to get out of the first inning, allowing four runs on four hits in two-thirds of an inning. Wallace relieved Kinney and kept Nebraska in the game by allowing only one run in 3.1 innings.

Vanessa Oatley (1-2) earned the win in relief for Penn State with 2.2 scoreless innings.

Penn State scored four times in the top of the first inning to take its first lead of the series. The Nittany Lions opened the game with three consecutive singles, and the game’s first run scored on a passed ball. A successful squeeze bunt where Nebraska threw late to home plate gave PSU a 2-0 advantage before a two-out, two-run single from Lilia Crouthamel made it 4-0.

Nebraska got one run back in the bottom of the second. Gray led off with a single. A one-out error and two-out walk loaded the bases for freshman Caitlynn Neal, who produced an RBI single. Trailing 4-1, the Huskers still had the bases loaded but a foul out ended the inning.

The Huskers got another run in the bottom of the third. A one-out double from senior Cam Ybarra and a two-out RBI double from Wallace cut the lead to 4-2.

Penn State answered in the top of the fourth on a one-out solo home run from Melody Coombs.

Nebraska cut the lead to one with a two-run fifth inning. Billie Andrews singled with one out and she scored on a two-out RBI double from Gray. Gray then came home to make it 5-4 on an RBI single from Wallace.

The Huskers tied the game in the sixth inning. Senior Rylie Unzicker led off with a single before classmate Sarah Yocom squared around to bunt. Yocom popped up the bunt but it landed over the second baseman’s head. Unzicker then raced to second base and appeared to beat the throw but was called out. Junior Peyton Glatter then drew a walk as a pinch hitter and senior Tristen Edwards was hit by a pitch to load the bases. Billie Andrews followed with an RBI single to score Yocom and tie the game but Neal was thrown out attempting to score from second on the play. A foul out the ended the inning.

Penn State stranded a runner at second base in the top of the seventh. In the bottom of the inning, sophomore Brooke Andrews was hit by a pitch . A one-out error and a walk to Unzicker loaded the bases, but an infield pop out and a ground out sent the game to extra innings.

In the top of the eighth, a leadoff single, a sacrifice bunt and a bloop single put Nittany Lions on second and third with only one out. Ferrell responded with a big strikeout but Chelsea Bisi grounded a two-out, two-run single up the middle to give Penn State a 7-5 lead.

Nebraska put the tying runners on base with one out in the bottom of the eighth after Billie Andrews singled and Ybarra reached on an error. But the next to batters were retired to end the game.

Nebraska returns to action next weekend when the Huskers travel to Rutgers for a four-game series on Friday, Saturday and Sunday.