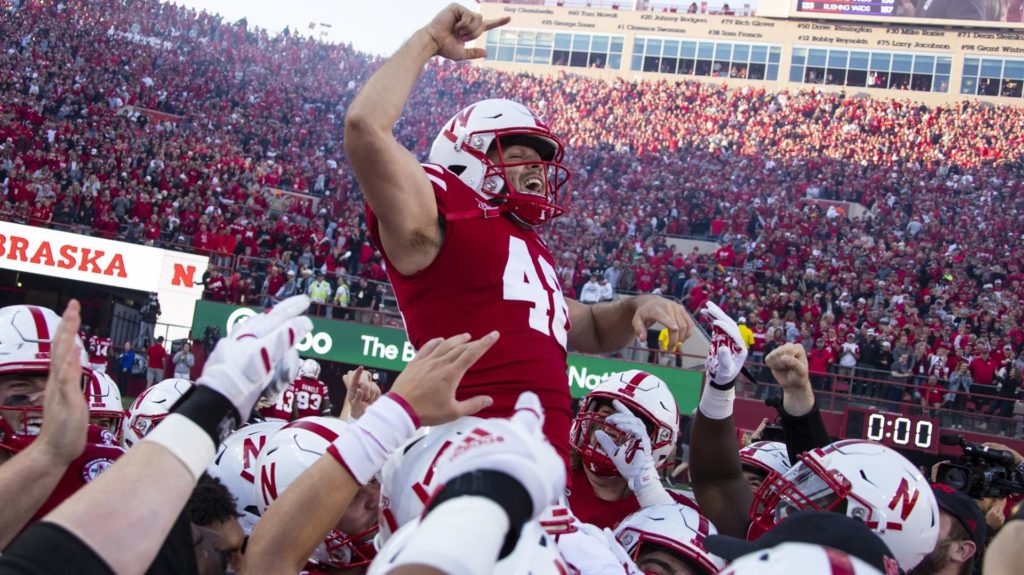 Lincoln – Nebraska walk-on place-kicker Lane McCallum wrote poetic justice with his right leg by booting a 24-yard game-winning walk-off field goal between the uprights of the south end zone of Memorial Stadium Saturday to send the Huskers to a 13-10 walk-off win over Northwestern.

McCallum, a sophomore from Norfolk, Neb., who has played most of the season for injured returning starter Barret Pickering, waited through three icing timeouts from Northwestern Head Coach Pat Fitzgerald. McCallum’s kick was true through the middle of the uprights setting off an on-field celebration in a gutsy win for the Big Red, which improved to 4-2 overall and 2-1 in the Big Ten.

McCallum’s kick was just the second walk-off winning kick by Nebraska in the history of Memorial Stadium, joining Josh Brown’s walk-off winner in a 34-32 win over Colorado on Nov. 24, 2000. It was just the third walk-off win overall by Nebraska in the history of the Big Red’s 96-year-old landmark. The other was a Hail Mary pass from backup quarterback Ron Kellogg to Jordan Westerkamp for an unforgettable 27-24 win over Northwestern on Nov. 2, 2013.

Saturday’s game-winning drive was also engineered by a reserve quarterback, as Noah Vedral led the Huskers to victory in the fourth quarter after taking over for an injured Adrian Martinez. Vedral’s final drive covered 42 yards in six plays and just one minute, after a heroic interception by Husker senior defensive back Lamar Jackson on Northwestern’s final offensive play of the game. It was the only turnover in an old-fashioned defensive slugfest.

Lane McCallum on the game-winning kick

The biggest offensive play of the final drive came on a 32-yard strike from Vedral to Wan’Dale Robinson. The freshman wide receiver/running back carried the offensive load for the Huskers from start to finish, hauling in seven receptions for a career-high 123 yards. He also led the Huskers with seven carries for 44 yards, including a highlight-reel 42-yard touchdown burst in the first quarter to give Nebraska an early lead.

On a sunny but windy day inside Memorial Stadium, Nebraska used a gusty wind at its back in the first quarter as an advantage to take a 7-0 lead. However, Nebraska’s touchdown did not come through the air but on the nimble legs of Robinson, who made a spectacular cut to create space for himself just beyond the line of scrimmage and run untouched down the Husker sideline to the south end zone. Nebraska took a 7-0 lead with 4:25 left in the first quarter, as Robinson’s run capped an eight-play, 70-yard drive that put the Huskers in the driver’s seat.

The Blackshirts pitched a shutout for the rest of the first quarter, and Nebraska’s offense capitalized while going against the wind in the second quarter. The Huskers used a 35-yard McCallum field goal with 8:24 left in the half to push their lead to 10-0. McCallum’s field goal put the finishing touches on a 10-play, 61-yard drive that consumed 5:10.

On the ensuing kickoff, Northwestern return man Riley Lees uncorked a 50-yard return to put the Wildcats at Husker 45 to open the drive. Northwestern operated in full attack mode, but the Blackshirts held the Cats to just 23 yards on nine plays before Charlie Kuhbander snuck a 40-yard field goal inside the left upright to cut Nebraska’s lead to 10-3 with 5:15 left in the half.

The defenses held the rest of the quarter to send the Huskers to halftime with a 10-3 lead.

In the third quarter, Northwestern kept the wind at its back and took advantage on its first possession, going 58 yards on six plays capped by quarterback Aidan Smith’s two-yard touchdown run to tie the game at 10 with 11:20 left. Smith finished his day as the game’s leading rusher with 64 yards on 16 carries with one score against a tough-minded Blackshirt unit. Smith also completed 19-of-32 passes for 136 yards, but the Huskers made the Wildcats pay for his interception with one minute left.

Jackson finished with four tackles to go along with his interception, while linebackers Mohamed Barry and Collin Miller each led the Huskers with eight stops on the day. Marquel Dismuke and JoJo Domann both pitched in seven stops, while defensive tackle Darrion Daniels played a strong game inside with six stops, including a TFL.

The Huskers mounted a threat late in the third quarter, ignited by a 49-yard catch-and-run on a shovel pass to Robinson. However, the drive stalled just inside the red zone, and McCallum hit the right upright on the potential go-ahead field goal, sending the game to the fourth quarter tied at 10.

On Nebraska’s final play of the third quarter, Martinez limped off the field after trying to fight for an extra yard to stretch for a first down on a third-down conversion. Martinez finished 13-of-20 passing for 145 yards, while adding 26 rushing yards on nine carries against a stout Wildcat defense.

Vedral stepped up to the challenge in the final quarter, completing 2-of-5 passes for 41 yards while adding seven carries for 33 yards, including two carries for 13 total yards on Nebraska’s final two plays from scrimmage to put McCallum in the dead middle of the field at the 7-yard-line.

Nebraska’s win over Northwestern, which slipped to 1-4 overall and 0-3 in the Big Ten, marked the sixth time in nine Big Ten meetings that the game between the Huskers and Wildcats was decided by a field goal or less. The teams are 3-3 in those six games.

Nebraska, which has equaled its win total from each of the previous two seasons returns to Big Ten road action next week to take on Minnesota. Kick-off between the Huskers and the Golden Gophers is set for 6:30 p.m. with live television coverage by BTN.

(AUDIO) Lexington boy could be first case of MIS-C