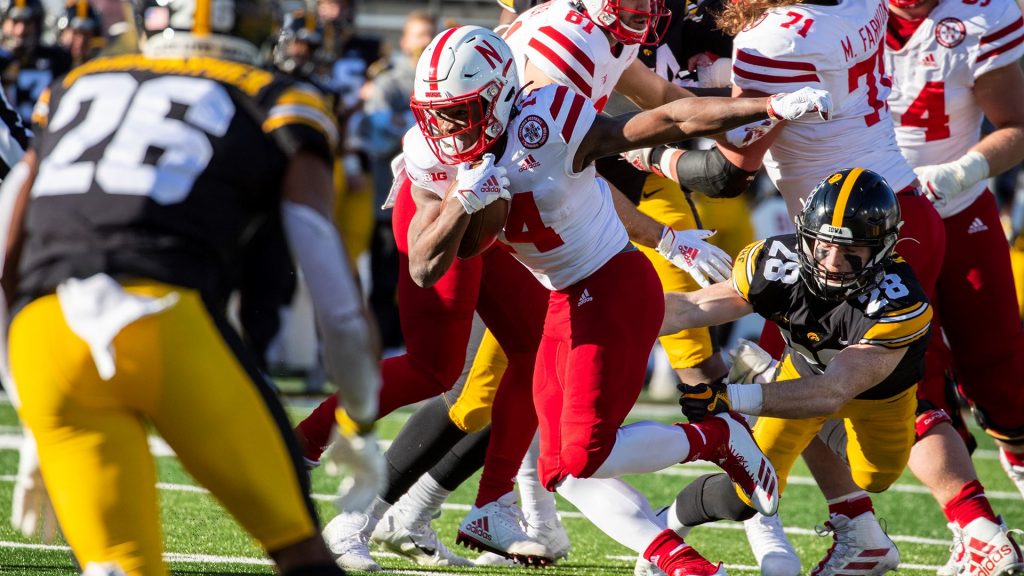 Iowa City – In a back-and-forth game from start to finish, No. 24 Iowa scored the game’s final 13 points to hand visiting Nebraska a 26-20 loss in the Heroes Game at Kinnick Stadium on Friday afternoon.

Nebraska, which slipped to 1-4, rallied from a 10-0 first-half deficit to take a 20-13 lead following a touchdown on the opening drive of the second half. The Hawkeyes improved to 4-2 on the season with their fourth straight win.

The Huskers took the lead on running back Rahmir Johnson’s first career touchdown, a 12-yard burst that capped an eight-play, 70-yard march that took just under three minutes. Junior quarterback Adrian Martinez, who earned his third start of the season, went 4-for-4 passing for 36 yards on the drive. But Iowa answered the Husker touchdown with seven points of its own with a Mekhi Sargent two-yard touchdown run to tie the score at 20 heading to the fourth quarter.

Iowa opened the fourth quarter with a 48-yard Keith Duncan field goal, before getting another field goal from Duncan from 37 yards out with 8:21 left in the game to go up 26-20. The Hawkeyes had a chance to seal the win on Duncan’s 51-yard field goal attempt with just over two minutes left, but the kick hit the crossbar and bounced into the end zone to give Martinez and the Huskers one more shot.

Martinez quickly completed a short pass to Austin Allen for five yards, before picking up a first down with a six-yard run. Martinez then hit Wan’Dale Robinson for 18 yards to the Iowa 39, on a spectacular sliding catch down the middle by Robinson, who finished as Nebraska’s leading rusher and receiver. Robinson carried six times for 42 yards, while adding nine receptions for 75 yards.

On the next play, Martinez dropped back and was about to throw when he was hit by Chauncey Gholston. The ball popped into the air was caught before it hit the ground by Zach VanValkenburg for a game-sealing fumble recovery at the Iowa 48.

In an entertaining first half, Iowa jumped out to a 10-0 lead at the end of the first quarter before Nebraska rallied to tie the game at halftime. Iowa took the opening kickoff and marched 54 yards in seven plays before the Husker defense stiffened to limit the Hawkeyes to a 32-yard Duncan field goal just 2:54 into the game.

Martinez returned to the starting lineup at quarterback and helped the Huskers pick up a quick first down before the offense stumbled and was forced to punt. Iowa drove into Husker territory again on its next drive before the Big Red held the Hawkeyes and forced a punt. NU started at its own 2 and was able to escape from the shadows of its own goalposts before punting. However, a solid punt return by Iowa set the Hawkeyes up with a short field starting at the NU 46. Six plays later, Petras hit Tyrone Tracy for a six-yard touchdown pass to give the Hawkeyes a 10-0 lead with 1:09 left in the opening quarter.

McCaffrey entered the game at quarterback for the Huskers, and led the offense on an 11-play, 62-yard march that culminated with a 31-yard Connor Culp field goal to put the Big Red on the board with 12:35 left in the first half.

Nebraska’s Blackshirts then came up with a big play, as defensive back Dicaprio Bootle snagged his first career interception to give the Husker offense a short field of its own. McCaffrey moved the Huskers 22 yards in six plays before Culp hit a 39-yard field goal to pull Nebraska within 10-6 with 9:42 left in the half.

Iowa answered with a strong drive, moving 55 yards in 12 plays before the Blackshirts held the Hawkeyes to a 33-yard Duncan field goal with 3:48 remaining in the half.

Trailing 13-6, Nebraska sent Martinez back out to the field at quarterback and the Huskers started clicking. Nebraska quickly moved into Hawkeye territory, but on 1st-and-10, an errant snap sent Martinez and the Huskers to a 19-yard loss before he could jump on the loose ball. Facing 2nd-and-29, the Huskers picked up six yards before Allen hauled down a highlight reel catch on the Nebraska sideline to convert on 3rd-and-23. Allen finished the game with two catches for 28 yards. In addition to the 23-yard connection with Allen, Martinez completed passes of 28 and 22 yards on the drive, going 3-for-4 for 73 yards to tie the score.

The Big Red finished the 11-play, 75-yard drive with Martinez’s one-yard touchdown plunge to tie the score at 13 with 29 seconds left in the half. Iowa tried to respond, but Husker defensive lineman Casey Rogers ended any Hawkeye scoring hopes with his eight-yard sack of Petras to send the teams to the locker rooms tied.

For the game, Luke Reimer led the Husker defense with 12 total tackles, including 11 solos and a TFL, while Will Honas added eight stops. Deontai Williams, JoJo Domann and Marquel Dismuke all pitched in seven tackles.

Nebraska returns to Big Ten road action at Purdue next Saturday. The game will be televised by the Big Ten Network, and the kick-off time will be announced later this weekend.